UEFA SUPER CUP GUIDE: Liverpool vs Chelsea – When is it, where is it and how to watch plus prize money, latest odds, previous winners and more

By Harry Olsen For Mailonline

European champions Chelsea and Liverpool come together to decide the ultimate champions of Europe in the UEFA Super Cup 2019 clash.

Frank Lampard has taken the reigns from Maurizio Sarri as he looks to continue the former Blues manager success in Europe after crushing Arsenal 4-1 in the Europa League final.

Mohamed Salah and Co also made easy work of their all-English clash with Tottenham to win 2-0 from Mo Salah penalty and Divock Origi goal in the dying minutes of the game to win the Champions League.

Sportsmail provide you with everything you need to know for the UEFA Super Cup match Liverpool vs Chelsea including date, kick-off time, channel and location plus prize money, odds, previous winners and more.

Who can play in the UEFA Super Cup?

The UEFA Super Cup is an annual match that takes place between the winners of the Europa League and Champions League.

2019 UEFA Super Cup will be the 44th edition and will be the first time that two English sides have met.

In addition, it will be only the eighth occurrence of two teams from the same nation playing against each other in the annual match.

How much prize money for winning UEFA Super Cup

Both Chelsea and Liverpool will earn €3.5million (£3.3million) for their participation with winner getting a €1million bonus (£940,000).

The UEFA Super Cup will take place on Wednesday, August 14.

What time is kick-off?

How can I watch UEFA Super Cup?

US audiences can watch on Bleacher Report LIVE and TNT US.

The match between Liverpool and Chelsea for UEFA Super Cup trophy takes place in at Besiktas’ Vodafone Park in Istanbul.

It will be the first time the UEFA Super Cup has been held in Turkey and the stadium is a 41,888 seater. 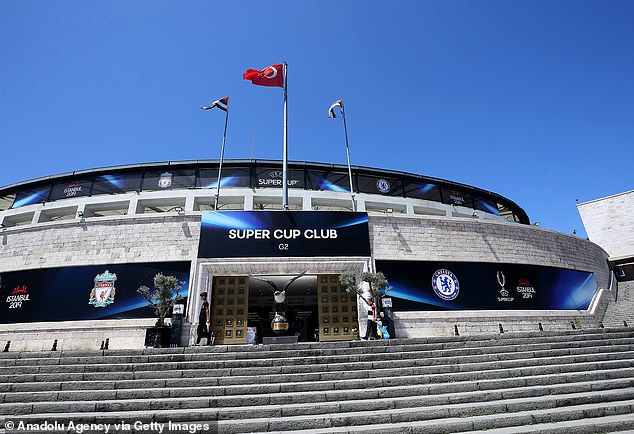 There are no tickets available for UEFA Super Cup via the UEFA website.

There are tickets listed on LiveFootballTickets have with starting price from £109.

Last year’s winners of the UEFA Super Cup were Atletico Madrid who beat Champions League champions Real Madrid 4-2 with goals from Diego Costa in the first and 79th minute securing the win.

Both European champions Real Madrid and Atletico Madrid made it to the UEFA Super Cup by beating Liverpool and Marseille in their finals, respectively