By Mario Ledwith Brussels Correspondent For The Daily Mail

Britain will be free to sign trade deals during the Brexit transition period without permission from the European Union, it was claimed last night.

EU negotiators have accepted the UK’s demand to pursue an independent trade policy while remaining inside the customs union and single market, according to reports.

The Times newspaper claimed that despite EU’s negotiating guidelines that Britain will not be able to implement trade deals ‘unless authorised to do so by the union’, Michel Barnier’s position had softened.

EU negotiators have accepted the UK’s demand to pursue an independent trade policy while remaining inside the customs union and single market, according to reports

The claim comes after the EU revised its draft negotiating stance offer to call for a comprehensive trade deal.

Brussels will say that any agreement with the UK should be ‘balanced, ambitious and wide-ranging’ despite previous warnings that its offer would fall far short of what the Prime Minister wanted.

The decision to open up the offer was taken after member states wanting a more favourable deal with the UK objected to the rigid approach in draft negotiating ‘guidelines’ revealed last week.

This will prove encouraging for British negotiators as the EU prepares to rubber-stamp the start of Brexit trade talks during a highly-anticipated summit in Brussels next week. 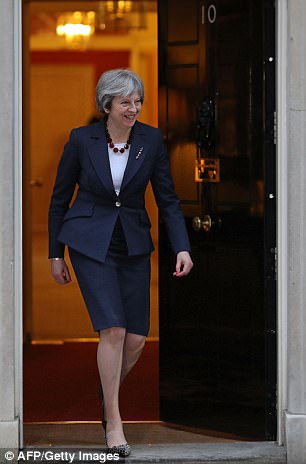 The document also bolsters a push by the EU to encourage Britain to remain part of the customs union as part a deal, which has been ruled out by Mrs May

European Council leader Donald Tusk and Commission president Jean-Claude Juncker, who are leading the EU side, had been pushing the UK to soften its stance of wanting to leave both the customs union and the single market.

But in meetings this week, a group of sympathetic countries insisted that the scope of the EU’s offer should be changed.

Among the new additions to the document are calls for the EU and Britain to combine to face ‘global challenges’ such as climate change after Brexit. The text also calls for agreements to protect the mass flow of data between Europe and the UK, as well as a separate deal on road traffic.

While the updated guidelines suggest the EU is more willing to discuss the kind of deal wanted by Britain, the document also spells out opposition to key elements of Britain’s approach.

EU diplomats pushed to further quash Chancellor Philip Hammond’s hopes of reaching a deal to allow the City of London to operate across Europe after Brexit.

States such as France and Germany are also adamant that any agreement cannot be seen to be as good as current EU membership because it could encourage other countries to leave.

The document also bolsters a push by the EU to encourage Britain to remain part of the customs union as part a deal, which has been ruled out by Mrs May.

The EU has wasted billions in taxpayer money to help end corruption and political oppression in Turkey, according to a damning report.

The bloc’s own auditors said £8billion in donations, including hundreds of millions from the UK, had had little effect.

The funds, handed over between 2007 and 2020, were intended to prepare Turkey to join the EU. But the report has underlined concerns about political freedom, judicial autonomy and press independence in the country.

The European Court of Auditors said Turkey had brought in ‘repressive’ domestic measures after an attempted coup in 2016 and recommended that funding be ‘better targeted’.

Accession talks have effectively ground to a halt, but Brussels cannot take too harsh a line due to Turkey’s role in stemming Europe’s migration crisis.

President Recep Tayyip Erdogan has agreed to take in more than three million refugees in return for huge payments – with an extra £2.6billion promised yesterday.