In a withering rebuke for the Health Secretary, Sir David Norgrove told him the data presented to the public was ‘still far from complete and comprehensible’

Matt Hancock was taken to task over ‘misleading’ coronavirus test figures today by the UK’s top statistician, who accused him of spinning the numbers to make them look better.

In a withering rebuke for the Health Secretary, Sir David Norgrove  told him the data presented to the public was ‘still far from complete and comprehensible’.

In his second critical letter to Mr Hancock in the space of a month, Sir David, a former Treasury economist and private secretary to Margaret Thatcher, took aim at his use of data to claim more than 100,000 per day were being tested for coronavirus.

He lashed out at the way ministers have presented tests that had been analysed and those simply sent out by post to potential sufferers as ‘completed’.

He warned that the way the statistics were used fell ‘well short’ of professional standards, adding: ‘It is not surprising that given their inadequacy data on testing are so widely criticised and often mistrusted.’

He said there were two main purposes for the testing statistics – to help understand the epidemic and to support the management of the testing programme.

‘The way the data are analysed and presented currently gives them limited value for the first purpose,’ he wrote.

‘The aim seems to be to show the largest possible number of tests, even at the expense of understanding.’

It came as ministers faced pressure over the stuttering test and trace system, which staff say has been beset by problems that have left staff with nothing to do.

Ministers insist it is working and Mr Hancock last night said it had more capacity than it needed.

But he also begged people who were eligible for tests to come forward and get one. 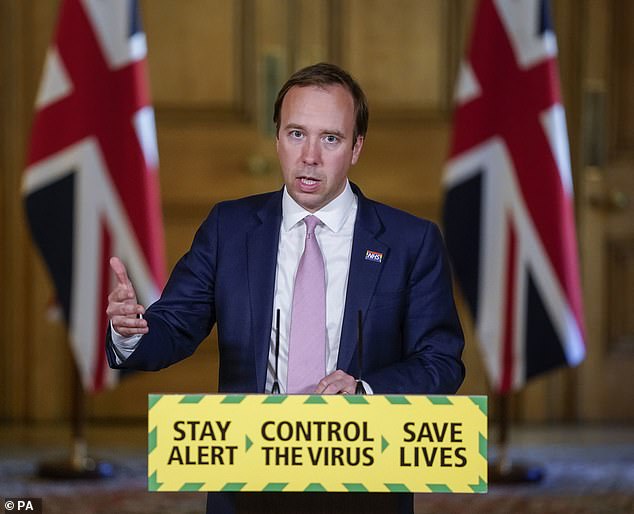 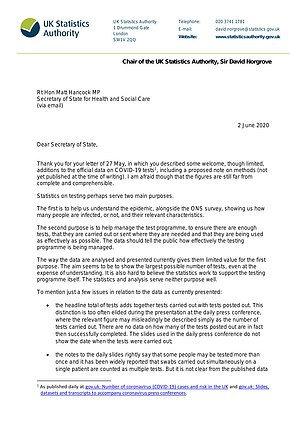 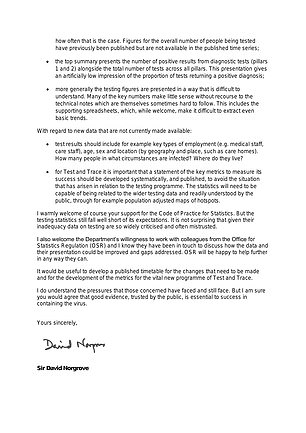 In his second critical letter to Mr Hancock in the space of a month, Sir David took aim at his use of data to claim more than 100,000 per day were being tested for coronavirus

In his letter today, Sir David again attacked the collation of ‘headline tests’, writing: ‘This distinction is too often elided during the presentation at the daily press conference, where the relevant figure may misleadingly be described simply as the number of tests carried out.

‘There are no data on how many of the tests posted out are in fact then successfully completed. The slides used in the daily press conference do not show the date when the tests were carried out.’

He added: ‘More generally the testing figures are presented in a way that is difficult to understand. Many of the key numbers make little sense without recourse to the technical notes which are themselves sometimes hard to follow.

Sir David first wrote to Mr Hancock last month, warning him to improve the ‘trustworthiness’ of his daily updates and the clarity of his 100,000-tests-per-day target set for the end of April, which was met by adding posted test kits to the total of completed tests. 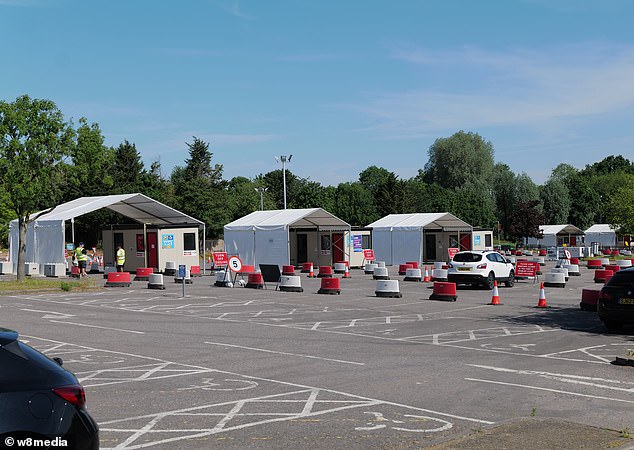 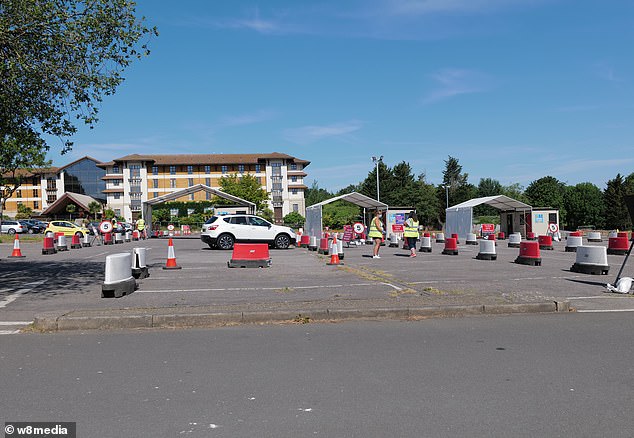 ‘This includes the supporting spreadsheets, which, while welcome, make it difficult to extract even basic trends.’

It came as the number of excess deaths in the UK since the coronavirus outbreak began reached almost 62,000.

Tuesday’s figures from the Office for National Statistics, showing 56,308 excess deaths in England and Wales between March 21 and May 22 2020, follow figures last week showing the equivalent numbers for Scotland and Northern Ireland.

Together, this means the total number of excess deaths in the UK as recorded by death registrations across this period now stands at 61,795.

Thank you for your letter of 27 May, in which you described some welcome, though limited, additions to the official data on COVID-19 tests, including a proposed note on methods (not yet published at the time of writing). I am afraid though that the figures are still far from complete and comprehensible.

The first is to help us understand the epidemic, alongside the ONS survey, showing us how many people are infected, or not, and their relevant characteristics.

The second purpose is to help manage the test programme, to ensure there are enough tests, that they are carried out or sent where they are needed and that they are being used as effectively as possible. The data should tell the public how effectively the testing programme is being managed.

The way the data are analysed and presented currently gives them limited value for the first purpose. The aim seems to be to show the largest possible number of tests, even at the expense of understanding. It is also hard to believe the statistics work to support the testing programme itself. The statistics and analysis serve neither purpose well.

To mention just a few issues in relation to the data as currently presented:

With regard to new data that are not currently made available:

I warmly welcome of course your support for the Code of Practice for Statistics. But the testing statistics still fall well short of its expectations. It is not surprising that given their inadequacy data on testing are so widely criticised and often mistrusted.

I also welcome the Department’s willingness to work with colleagues from the Office for Statistics Regulation (OSR) and I know they have been in touch to discuss how the data and their presentation could be improved and gaps addressed. OSR will be happy to help further in any way they can.

It would be useful to develop a published timetable for the changes that need to be made and for the development of the metrics for the vital new programme of Test and Trace.

I do understand the pressures that those concerned have faced and still face. But I am sure you would agree that good evidence, trusted by the public, is essential to success in containing the virus.