Those who have reluctantly been reaching for their coats over the last few days should prepare to bare their arms once more – as an Indian Summer is on its way.

The recent autumnal chill will be replaced this weekend by much warmer weather, with the mercury set to hit 70F (21C) in parts of the UK on Sunday, according to forecasters.

A tropical blast from the Atlantic could even make it feel like 78.8F (26C) in some regions.

‘On Sunday we could get up to 21C in parts of the country and this is largely due to the polar airflow switching to bring in the remnants of some post-tropical air,’ said Emma Salter of the Met Office.

Horse-riders took advantage of the crisp autumnal weather as they trotted through Hyde Park this morning. Come Sunday, sunseekers are set to come out in force as the mercury is set to hit 70F (21C) in parts of the UK 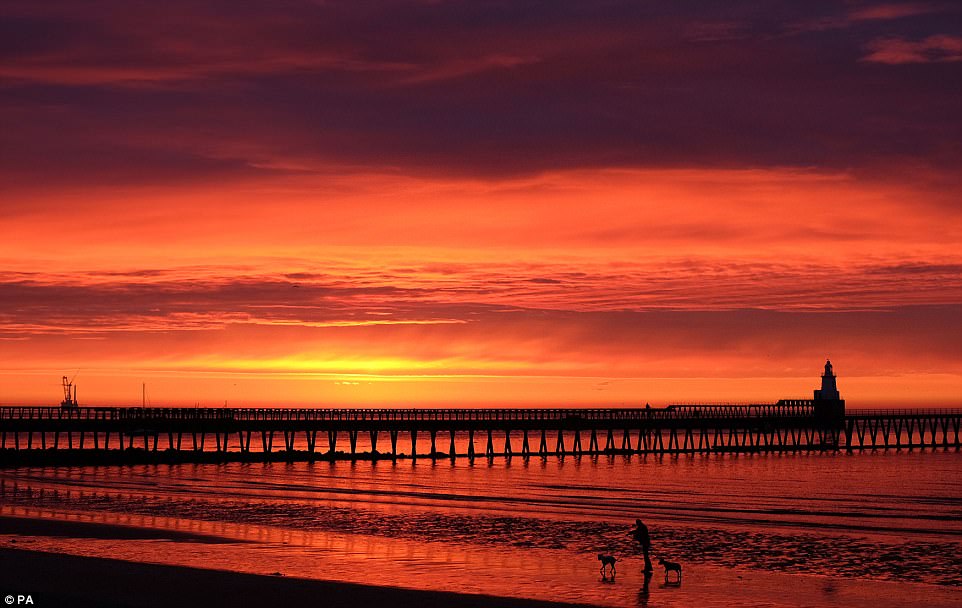 A tropical blast from the Atlantic could even make it feel like 78.8F (26C) in some regions on Sunday, giving Britain an Indian Summer. Above, a blood-red dawn over the port of Blyth on the Northumberland coast this morning

‘Temperatures will creep up over the next few days and it will feel warmer compared to last weekend which brought some air frost.

‘While it will feel mild, it is not going to be all sunshine and there will be a lot of cloud about, with some strong winds and rain in the north.’

She added: ‘We are keeping our eyes on a low-pressure system to the north which could bring some unsettled conditions later in the week.

‘Towards the end of the week, we expect a bit of a north-south split with the driest conditions to the south, and it should be pretty decent around the southeast,’ she told the Mirror.

Although it is set to stay mainly dry with warm and sunny spells in the south today, wet and windy weather is spreading across northern and some western parts, with some heavy rain likely across Northern Ireland and Scotland.

Outbreaks of rain will continue over Scotland, Wales and western and northern parts of England tonight, according to the Met Office. However, it will remain mostly dry across the rest of England. 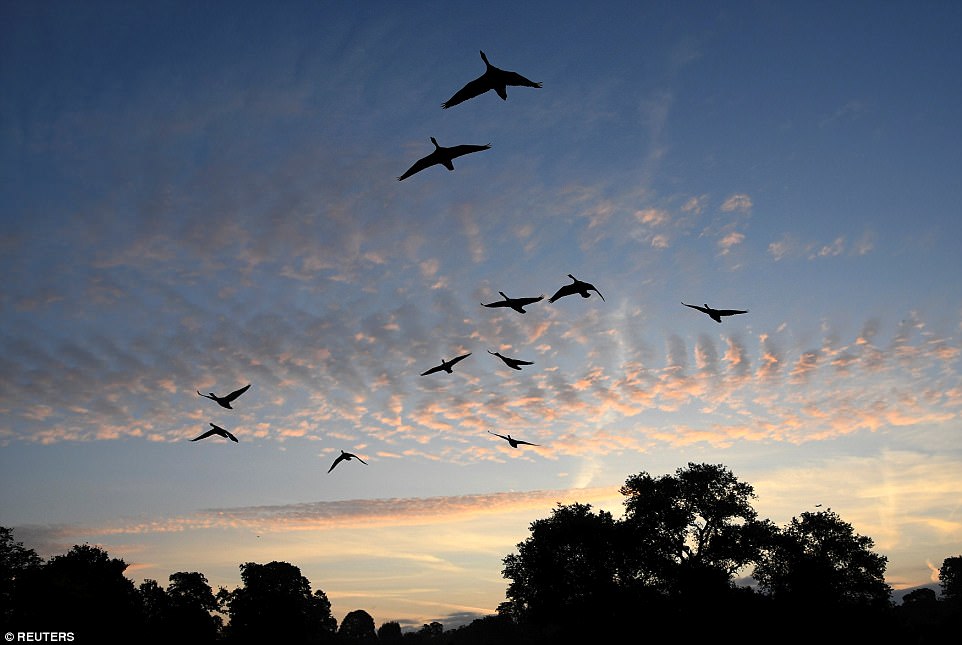 ‘While it will feel mild, it is not going to be all sunshine and there will be a lot of cloud about, with some strong winds and rain in the north,’ said Emma Salter of the Met Office. Pictured, geese over Hyde Park this morning

Meanwhile, it is predicted that Britain may be hit by hurricane-force gales before Christmas, with forecasters warning seven storms could be on the way.

The forecast comes in the wake of Storm Aileen, which battered the country with 83mph winds last week, leaving tens of thousands of homes without power and creating travel chaos on the roads and rail. 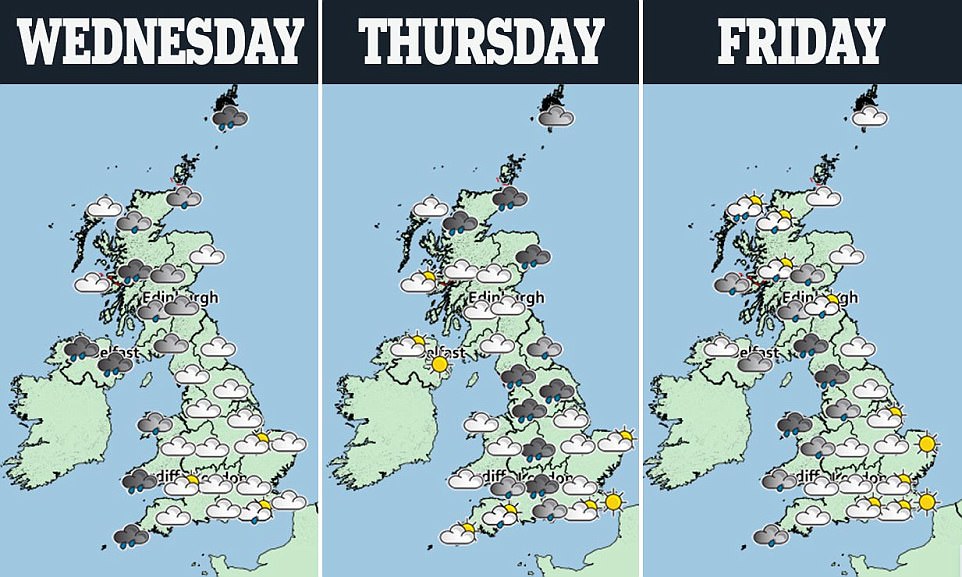 Today: Wet and windy weather spreading across northern and some western parts today, with some heavy rain likely across Northern Ireland and Scotland. Elsewhere, staying largely dry with warm sunny spells, although the odd spot of light rain is possible.

Thursday: Cloud and rain, heavy at times, spreading slowly and erratically east across England and Wales, but staying largely dry in the southeast. Turning brighter to the west, with scattered showers.

Outlook from Friday: Staying mostly dry, bright and warm in the south and east with sunny spells. However, bands of rain and strong winds moving across the north and west at times.

The prediction, made by AccuWeather the world’s second biggest commercial forecaster, comes after Storm Aileen’s furious march across Britain.

The first named storm of the year lashed the country with overflowing rivers leading to dozens of flood alerts.

Peak winds of 83mph were recorded at The Needles on the Isle of Wight, while Mumbles in Wales recorded a top speed of 74mph.

The Met Office, which names UK storms, does not go as far as issuing a prediction regarding the total of named storms – but confirmed a stormy autumn would be expected.

Its three-month autumn forecast warns of ‘one of the stormiest parts of the year’ ahead. Extreme gusts over 90mph were forecast by The Weather Company in the coming storms.

In 2016, Storm Angus on November 20 saw floods sever the London to the South-West rail line as 81mph gusts stranded a passenger ferry in the Channel.

Storm Barbara on December 23 and 24 delayed Christmas travellers with gusts up to 83mph.

The Met Office names Atlantic storms when they have the potential for amber or red warnings – meaning significant impacts – for wind, rain or snow.

The next six storms to hit the UK will be called as Brian, Caroline, Dylan, Eleanor, Fionn and Georgina.