A firm of South African undertakers have said they will sue a Christian pastor who ‘raised a man from the dead’ in a stunt at their mortuary.

Alleluia Ministries pastor Alph Lukau claimed he had brought a dead man back to life in front of a crowd of people near Johannesburg.

Footage of the event showed the man lying still in the coffin before sitting up again when the pastor puts his hands on him.

But Kings and Queens Funerals were not amused by the stunt, saying it had caused ‘malicious damage to our image’.

In the video the pastor speaks theatrically into a microphone, introducing supposed family members of the man in the coffin.

He invites the crowd to follow him in prayer, calling out Jesus’ name before waving his hands at the ‘deceased’ man.

The pastor then hands over the microphone, leans over the ‘dead’ man, and puts his hand on his chest.

Suddenly the man in the coffin sits up and acts his part, looking around as though astounded by what had happened.

The funeral provider said in a statement: ‘We would like to distance ourselves from the supposed resurrection of a deceased man by Alleluia Ministries who allegedly was at our mortuary.

Theatrical: Pastor Alph Lukau acts as master of ceremonies in front of the man’s coffin in South Africa, urging the substantial crowd to pray with him 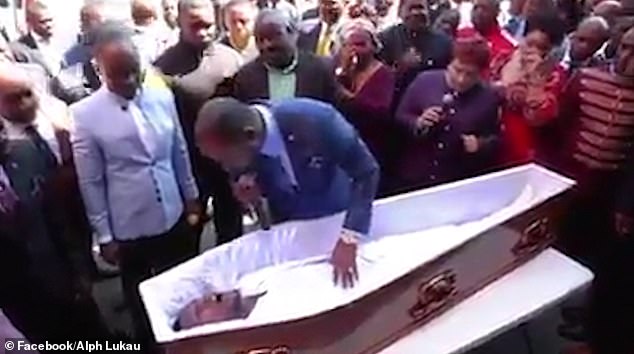 Ruse: The pastor puts his arms on the ‘dead’ man’s chest during the ceremony in South Africa. The funeral provider has said it will take legal action against him

‘We were approached by alleged family members of the deceased who informed us they had encountered a dispute with a different funeral service provider and would like to use our transport services, which we offered them.

‘We did not supply the coffin neither did we store the deceased at our mortuary and no paper work was processed by Kings and Queens Funerals.

‘As a funeral services provider we do not offer services without documentation neither do we repatriate bodies without any paper work.

‘We are in the process of taking legal action for this malicious damage to our image.’

Lukau nonetheless insisted the ‘resurrection’ was real, saying: ‘An astounding miracle took place in the House of God this morning.

‘A dead man came back to life as the church of God prayed’. 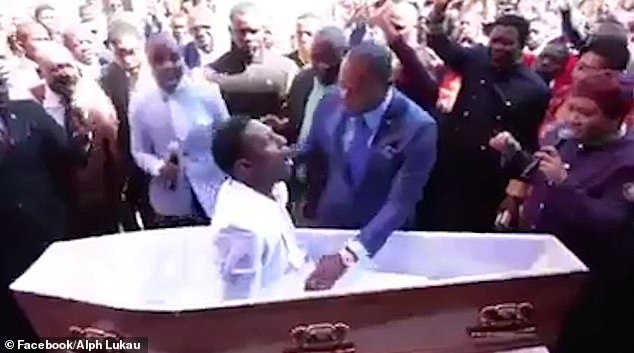 Comeback? The man in the coffin plays his part in the theatrics by sitting up dramatically and appearing to gaze around in astonishment 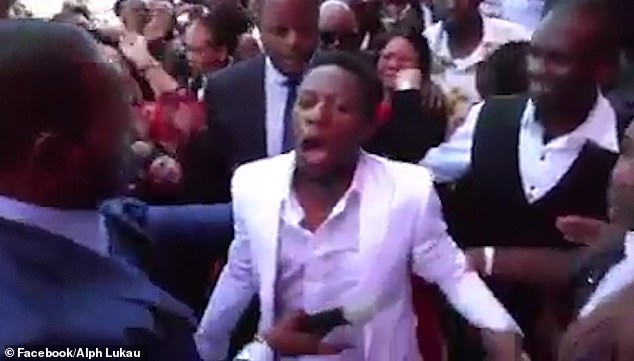 Source of controversy: The ‘deceased’ man in the crowd after the resurrection stunt which has led to a firm rebuttal from the funeral providers