‘I identify as a suitcase. Can I fly for free now?’ US airline that became first in the world to allow passengers to identify as Mr, Ms or Mx is mocked on Twitter in a string of hilarious tweets

An airline has become the first in the world to let passengers identify as genders other than male and female – but has been mocked in a string of hilarious tweets.

US carrier United proudly boasted about its decision on Twitter to its 1.2million followers.

It said: ‘Fly how you identify. Our new non-binary gender options are now available.’

It included an image saying its customers can now book tickets as a ‘Mr’, ‘Ms’ or an ‘Mx’ – which means unspecified.

But it was met with a barrage of funny comments.

Graham Allen said: ‘I identify as someone that should be flying first class, while only paying basic economy prices.’

Another said: ‘I identify as a suitcase. Can I fly for free now?’

A third tweeted: ‘This is beautiful United! So Woke! I can hear the pilots chuckling as they look at the manifest.’

Quips: Some of the Twitter comments that mocked United

Cathleen Crowley-Koschnitzki, meanwhile, quipped: ‘How about you focus on the food.’

And another passenger added: ‘This is so unnecessary. Stop shrinking the seats and space to only fit eight-year-olds.’

The airline was also mocked because ‘Mx’ is used at the end of websites in Mexico.

Another passenger pointed it out, saying: ‘I too identify as a Mexican website domain.’

Joe Splaining said: ‘Why include gender at all in the process? We’re all just packing into a tiny sky tube together for a few hours, why do you need to know what’s in my pants first?’

Yet Laura Lucas said: ‘The hate here, wow. I, as a gender fluid non-binary person, do not understand the problem of you people.

‘I love this Invention, thanks United. Hope many companies will follow.’

And another customer agreed and said: ‘Alright United… way to step up… Delta your turn.’

United’s Chief Customer Officer, Toby Enqvist, said: ‘United is excited to share with our customers, whether they identify along the binary of male or female or not, that we are taking the steps to exhibit our care for them while also providing additional employee training to make us even more welcoming for all customers and employees.’ 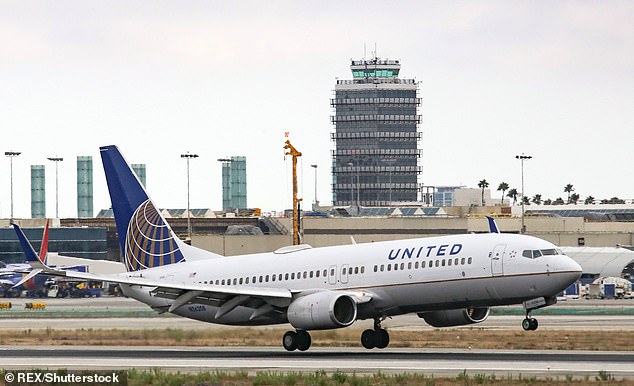 United’s Chief Customer Officer, Toby Enqvist, said: ‘United is excited to share with our customers, whether they identify along the binary of male or female or not, that we are taking the steps to exhibit our care for them

Up to 1.7 per cent of people are intersex – meaning they are born with sex characteristics that are neither definitively male or female – according to the United Nations.

In addition, studies suggest that a growing number of people identify as trans or non-binary.

More than 10 per cent of U.S adults identify as LGBT+, rising to 20 per cent among younger millennials, found a 2016 study by LGBT+ group Glaad, which argued that youth increasingly reject binary identities such as male or female.

Experts said airlines would be looking to adapt to changing demographics and social norms.

‘The world itself is evolving… it’s in airlines’ interests to show they are friendly to all types of people,’ said British aviation expert John Strickland.

British Airways, Air New Zealand, American Airlines and Delta have all confirmed they are preparing to bring in more gender options.