US actor Kevin Spacey, 62, is charged with four counts of sexual assault

Kevin Spacey faces sex assault charges in the UK: Actor, 62, is accused of attacking three men in London and Gloucestershire between 2005 and 2013

Hollywood star Kevin Spacey was today charged with a string of sexual offences in Britain over eight years while he ran one of London’s most historic theatres.

The star, 62, is being prosecuted for four counts of sexual assault against three men between 2005 and 2013 in London and Gloucestershire, after a probe was launched by the Met Police in 2017.

Spacey is also accused of ‘causing a person to engage in penetrative sexual activity without consent’.

Finally the third complainant, now in his 30s, said he was sexually assaulted in April 2013 in Gloucestershire. No court date has been set.

Spacey, the star of some of Hollywood’s biggest hits of the past three decades as well as TV shows such as House of Cards, was artistic director of the Old Vic Theatre in London between 2004 and 2015.

Kevin Spacey outside The Old Vic theatre in London, where he was artistic director for 11 years. The alleged sexual assaults are said to have taken place in this period

The Hollywood star is charged with four offences:

Sexual assault (Count 4) on another man, who is now in his 30s, in April 2013 in Gloucestershire.

He is also accused of causing a person to engage in penetrative sexual activity without consent – in August 2008 in London [the same complainant as Count 3].

‘He has also been charged with causing a person to engage in penetrative sexual activity without consent. The charges follow a review of the evidence gathered by the Metropolitan Police in its investigation.

‘The Crown Prosecution Service reminds all concerned that criminal proceedings against Mr Spacey are active and that he has the right to a fair trial.’

Spacey is a two-time Oscar winner and known for starring roles in American Beauty, The Usual Suspects and House Of Cards.

The actor, 62, was interviewed under caution by the Metropolitan Police’s Complex Case Team in America back in 2019. They passed a file to the CPS last year.

Mr Spacey did not attend the Cannes Film Festival last week. But he is one of the stars of a micro-budgeted film called Peter Five Eight — in which Spacey plays a villain.

Spacey plays Peter, a ‘charismatic man in a black sedan who shows up in a small mountainside community’. He co-stars with actress Rebecca De Mornay, whom Peter targets for information at the urging of his ‘shadowy’ boss Mr Lock.

The actor has kept a low profuke in recent years. He was spotted on set in Dunsmuir, California, smoking a cigarette in July last year. 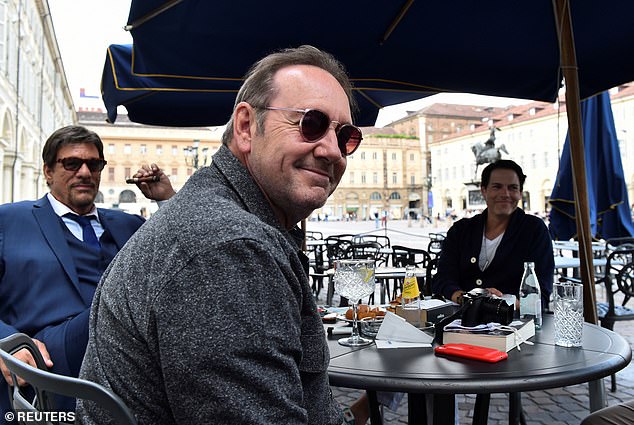 Kevin Spacey is to star in a micro-budgeted film called Peter Five Eight in which he plays the villain. It is due out this year (pictured filming in Italy last June

The film is based on a Biblical passage which runs: ‘Be alert and of sober mind. Your enemy the devil prowls around like a roaring lion, looking for someone to devour.’

Spacey, has denied all allegations of sexual harassment and assault. He is understood to be living quietly in London, although it was reported recently he also spends time in Florida and Los Angeles in the British winter or while filming.