A new stabilizer could soon turn any soldier into an expert marksman, able to hit their targets with deadly accuracy—even from a standing position.

The Aim Control Enhancer, or ACE, is being evaluated by the US Army for its Next Generation Squad Weapon (NGSW) Program, which fast-tracks cutting-edge firearms.

The device easily attaches to a rifle’s Picatinny rail, the mounting platform near the muzzle, and is held by the shooter’s non-firing hand.

Small gyroscopes and sensors in the ACE counter subtle horizontal or vertical motion, similar to a camera gimbal.

The Aim Control Enhancer, or ACE (pictured), stabilizes a rifle barrel against unnecessary movement. It’s being evaluated by the US Army as part of its Next Generation Squad Weapon (NGSW) Program

The enhancer attaches to the weapon’s mounting platform and the shooter grips it with their non-firing hand, like a rifle foregrip, Task and Purpose reported.

With the push of a button, it compensates for even slight movements and keeps the muzzle on target.

‘It doesn’t automatically aim, but the whole thing is closer to image stabilization in a camera lens,’ ACE’s inventor, Matthew Angle, told Task and Purpose, ‘As your hand shakes, the system moves to keep the barrel still.’

The Army confirmed officials with the NGSW program are evaluating the ACE.

‘The program is looking at anything and everything in a variety of different aspects, whether it’s trigger or barrel technology, and this is just another one of those,’ Project Manager Soldier Lethality spokesman Peter Rowland told Military.com. 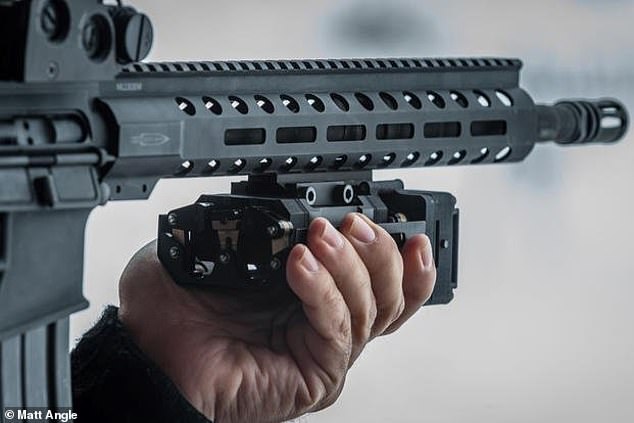 Small gyroscopes and sensors in the ACE counter subtle horizontal or vertical motion, similar to a camera gimbal

Maintaining stability while firing is exceeding difficult, especially in an unsupported position.

Even breathing techniques and years of training can’t always compensate for muzzle wobble.

But the ACE enables a shooter to select a target and remain in the proper orientation, using small gyroscopes and inertial sensors to monitor and adjust how the rifle is moving.

‘This effort seeks to merely correct for the shaking of the weapon that is not controllable by the user,’ according to the ACE’s contract.

‘In this manner, a compact, self-contained unit may be constructed in a form factor that is useful on a tactical rifle.’

Angle designed the ACE device in 2014, while working on his doctorate at MIT. 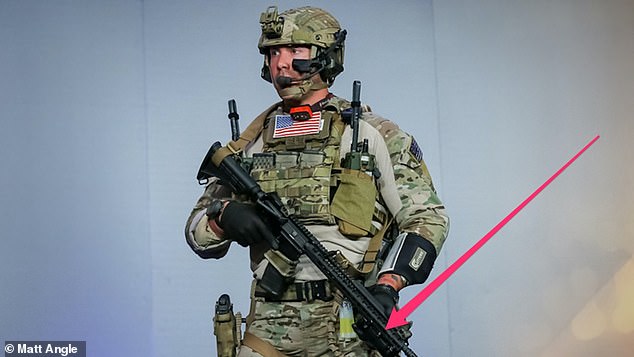 The ACE was originally being considered as part of the Army’s now-defunct TALOS, program—an attempt to create a real-life version of Iron Man’s high-tech super-suit

‘The idea is just to get rid of the shake you can’t control and still let you aim the thing,’ he told Military.com. ‘It does reduce your wobble pattern. … In most people, we can take out somewhere between 60 and 80 percent their wobble pattern size.’

The current iteration weighs just under nine ounces and will retail for about $1,000, Angle said.

It can run on two batteries for five hours before it needs recharging.

Angle had originally been developing the equalizer for the Army’s defunct TALOS, or Tactical Assault Light Operator Suit, program—an attempt to create a real-life version of Marvel’s Iron Man.

Back in 2013, the U.S. Special Operations Command requested design submissions for a military-grade ‘super suit.’

Submissions were required to incorporate an ‘operable exoskeleton’ capable of a full range of motion while giving the wearer an array of virtual superpowers — including super-human strength, the ability to see in the dark, and a way of deflecting bullets.

TALOS was abruptly shuttered in February 2019, but interest in ACE survived.

The Army is still looking for a weapons manufacturer to produce automatic rifles the ACE could be attached to, Task & Purpose reports.

WHAT IS THE ARMY’S ‘IRON MAN’ EXOSKELETON?

In the hopes of staying ahead of the enemy, the US Army is testing a futuristic exoskeleton that gives soldiers superhuman abilities.

The frame fits around the soldier’s legs, and is attached to a belt worn around the waist.

The belt connects to flexible hip sensors, which tell a computer where the soldier is in space, as well as the speed and direction of the movements. 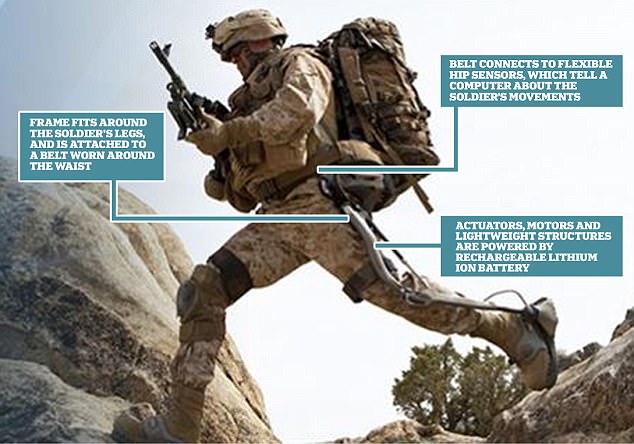 The US army is testing a futuristic exoskeleton that gives soldiers superhuman abilities. The frame fits around the soldier’s legs (shown on the left leg on this soldier) and is attached to a belt worn around the waist

During initial tests, engineers reported that Fortis reduced the amount of energy needed to perform a task by nine per cent, using AI to learn the gait of each soldier.

‘It locks and gives you a forward torque-twist that causes the lower leg to move toward the back, then it reverses direction to bring your leg forward.’