The birth of the AI supersoldier: US Army reveals hi-tech system to help troops on the battlefield analyse information far more quickly

By Mark Prigg For Dailymail.com

The US Army is using AI to try and give soldiers super-learning capabilities.

The experimental system would allow American troops to analyse new information far faster than they can at the moment.

U.S. Army soldiers from 1st Squadron, 40th Cavalry on a joint patrol with Iraqi troops in Hawr Rajab, a predominantly Sunni area of southern Baghdad, Iraq Tuesday, Oct. 9, 2007. In the future, they could use an AI system to alert them far more quickly of nearby threats

It uses a combination of computers and AI software to analyse information on the battlefield.

It is hoped the system could one day be embedded into military vehicles on the battlefield.

Dr. Rajgopal Kannan, an ARL researcher, said this technique could eventually become part of a suite of tools embedded on the next generation combat vehicle, offering cognitive services and devices for warfighters in distributed coalition environments.

Developing technology for the next generation combat vehicle is one of the six Army Modernization Priorities the laboratory is pursuing. 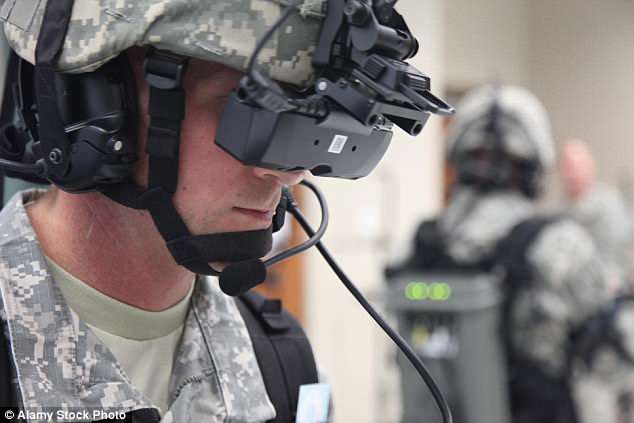 The US Army is experimenting with dozens of technologies, including VR (pictured) to boost the intelligence troops have on the battlefield.

Kannan collaborates with a group of researchers at the University of Southern California, namely Prof. Viktor Prasanna and students from the data science and architecture lab on this work.

The Army says the projecy is part of a major push to use AI for warfare.

‘This work is part of Army’s larger focus on artificial intelligence and machine learning research initiatives pursued to help to gain a strategic advantage and ensure warfighter superiority with applications such as on-field adaptive processing and tactical computing,’ it said.