Trevor Noah has been accused of inventing a large scale ‘racist backlash’ against Rishi Sunak, who became Britain’s first ever prime minister of colour this week.

The US comedy show host, 38, sparked fury among his British fans on Twitter after uploading a ‘Between The Scenes’ segment from his programme The Daily Show, entitled: ‘Unpacking the Backlash to Rishi Sunak.’

In the three-minute clip, which has more than 350,000 views, Noah claimed there were ‘people saying that Indians are going to takeover Great Britain’ as a response to Mr Sunak’s rise to the top job.

Mr Sunak is also the UK’s first ever Hindu prime minister. His grandparents migrated to the UK in the 1960s and they are all from India, bar his maternal grandmother, who was born in Africa, making him of British Asian heritage.

Noah, a South African native, said ‘seeing the backlash’ over Mr Sunak’s promotion ‘was one of the more telling things about how people view the role that they or their people have played in history.’

He then launched into a missive about post-colonial power structures and the suppression of black people and women in powerful positions.

It comes after it was revealed in September that Noah will be leaving The Daily Show after viewing figures plummeted by up to 75% following his takeover from Jon Stewart in 2013 – which analysts partly blamed on the shift to online streaming but also on the programme’s perceived ‘political bias’ and penchant for peddling ‘woke’ ideology.

In his monologue on Mr Sunak, Noah said: ‘You hear a lot of people saying: “Oh they’re taking over, Indians are going to take over Great Britain and what’s next?’, and I’ve always found myself going: “So what?… what are you afraid of?”

‘You see people in the UK, you see people like Tucker Carlson [an American Fox News host] all the time saying: ”You know what they’re trying to do… they won’t stop until black people and women are in positions of power”,… so what?’

He added: ‘Why are you so afraid? I think it’s because the quiet part a lot of people don’t realise they are saying is: ”We don’t want these people who were previously oppressed to get into power because then they may do to us what we did to them.”’

His analysis was blasted by some Twitter users in the UK, who accused Noah of ‘projecting’ America’s race problem onto Britain.

One fumed: ‘There’s been virtually no backlash to the appointment of an Indian man as PM in Britain (other than the fact the process was an undemocratic joke). But his race hasn’t been brought up in the negative by anyone.

‘American TV and American audiences do an awful lot of projecting.’

Trevor Noah, 38, sparked fury among his British fans on Twitter after uploading a ‘Between The Scenes’ segment from his programme The Daily Show, entitled: ‘Unpacking the Backlash to Rishi Sunak’

His analysis was blasted by some Twitter users in the UK, who accused Noah of ‘projecting’ America’s race problem onto Britain

Another fan wrote: ‘I love @Trevornoah but this is not true by any stretch of the imagination.

‘Across the broad spectrum of British society people are genuinely proud that a person of South Asian descent is PM.’

In the video, Noah added that people needn’t fear of anyone ‘taking over’ and repeating colonial horrors, adding: ‘Go to all these colonies around the world, go to all the places where the British ruled, go to South Africa or wherever it is… unless people are being delusional, people aren’t turning on anybody.

‘It’s not like Barack Obama became president  and said: ”Alright, where are the white people? Time to show them what’s up!”… didn’t happen.

‘People are complaining saying: ”I can’t believe Rishi Sunak is… you’ve got this Indian man who is..”, yo, King Charles is still the king of Jamaica… think about that for a second.

‘What do you think is going to happen? You’re just giving yourself away… it’s amazing when people say the quiet part out loud.’

He added: ‘People need to ask themselves that question… why are you afraid of power shifting to another gender or another race?’

Other Twitter users branded Noah ‘out of touch’ with the reality of UK politics, while another wrote: ‘Could it be that @Trevornoah is projecting the US onto somewhere which isn’t the US again?…

‘While some small pockets made racist comments this isn’t true of the UK by any stretch of the imagination. Can I recommend speaking to some Brits.’ 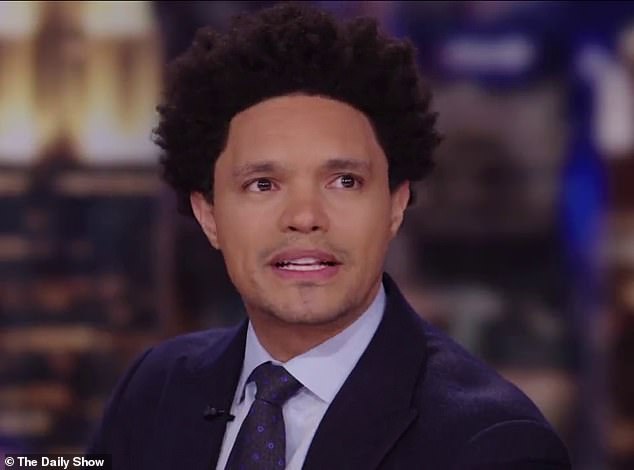 In a three-minute clip, which has more than 350,000 views, Noah claimed there were ‘people saying that Indians are going to takeover Great Britain’ as a response to Mr Sunak’s rise to the top job of prime minister

Noah’s segment was likely inspired by a telephone call from an LBC Radio listener last week, who suggested Mr Sunak ‘doesn’t love England’ and ‘isn’t even British in most people’s opinion.’ But after a Noah fan shared a clip of the call under the comedian’s video, Twitter users insisted it did not represent the view of any large number of people.

Noah’s segment was inspired by a telephone call from an LBC Radio listener last week, who suggested Mr Sunak ‘doesn’t love England’ and ‘isn’t even British in most people’s opinion.’

The caller claimed to be a Conservative party member when he called into Sangita Myska’s show.

Speaking on Sunday, before Mr Sunak won the race to become PM, he said: ‘Rishi’s not gonna win it. Rishi’s not even British, in most people’s opinion. He’s got American allegiance, his family’s American. They’re Indian businesspeople. He’ll go live in America no doubt. He doesn’t love England like Boris does.’

When Ms Myska insisted Mr Sunak was born in Southampton and studied at Winchester College, making him British, he added: ‘Lots of people are, half of al-Qaeda are British citizens. I’m just saying having a British passport doesn’t mean you’re a true English patriot who loves England.’

But after a Noah fan shared a clip of the call under the comedian’s video, Twitter users insisted it did not represent the view of any large number of people.

One wrote: ‘You do realise a few isolated cases doesn’t make a widespread backlash don’t you? If you search hard enough you will find someone that espouses any view you can think of.’

Another said: ‘In a population of 68 million it’s easy to find these examples. The reality is the overwhelming majority of Brits don’t think like this.’

It comes after a previous segment in Noah’s show by comedian Ronny Chieng also faced criticism from British Indian/Asian viewers this week.

In a 45-second skit discussing Mr Sunak, Chieng declared that ‘Indians are not Asians’, adding: ‘If this guy is Asian, how come when he became prime minister I felt absolutely nothing?’

He added: ‘I love how Indians try to have it both ways, like being Indian AND Asian, pick a lane, okay?’

Sunder Katwala, Director of UK immigration charity British Future, wrote in response online: ‘This is just rude and silly. Of course, he identifies as British Asian and British Indian, and that is how he is seen by British Indians, British Asians and other British people. If America uses terms differently, that’s fine for America.’