The US have confirmed that Iran has shot down one of its spy drones, but refutes the Revolutionary Guard’s claims it was in Iranian airspace.

‘The U.S.-made Global Hawk surveillance drone was brought down by the [Iranian] Air Force’ in the country’s southern coastal province of Hormozgan, the Revolutionary Guard added, according to the English-language Press TV.

The shootdown of the RQ-4 Global Hawk comes amid heightened tensions between Tehran and Washington over U.S. economic sanctions and alleged Iranian attacks on shipping in the Straits of Hormuz.

U.S. military officials said Iran fired a missile at another drone last week that responded to the attack on two oil tankers near the Gulf of Oman.

America blames Iran for the attack on the ships, which Tehran denies.

The U.S. military declined to comment if an American drone had been shot down but a spokesman said: ‘There was no drone over Iranian territory.’

State television did not provide pictures of the drone.

The reported shoot down of the RQ-4 Global Hawk, stock image, comes after the U.S. military previously alleged Iran fired a missile at another drone last week that responded to the attack on two oil tankers near the Gulf of Oman 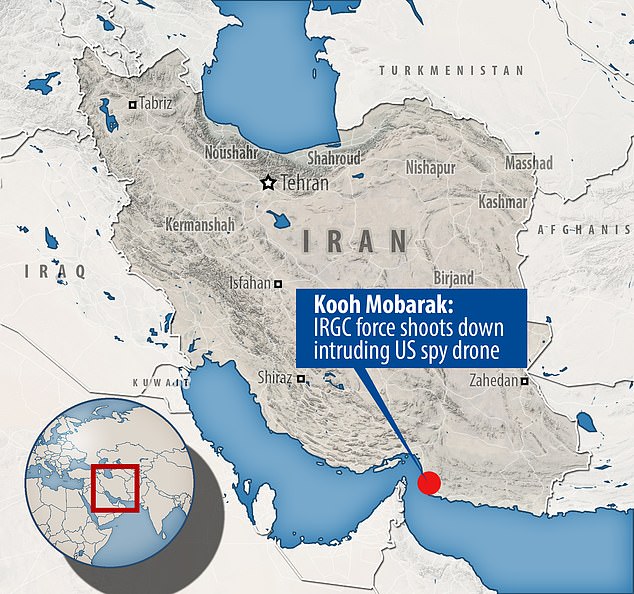 The US-made Global Hawk surveillance drone was brought down by its Air Force’ in the country’s southern coastal province of Hormozgan, the Revolutionary Guard said

The U.S. has accused Iran of being behind a series of operations against oil tankers in highly sensitive Gulf waters.

Tehran has denied involvement and instead suggested Washington could be the author of the attacks, using the operation to justify force against Iran.

Hormozgan borders the Strait of Hormuz, where the tanker attacks took place.

The relationship between Tehran and Washington has been particularly strained since the U.S. last year quit the multilateral 2015 nuclear deal and reimposed sanctions on Iran.

The U.S. has bolstered its military presence in the Middle East and blacklisted Iran’s Revolutionary Guards as a terrorist organisation.

But Tehran’s top security official said Wednesday there was no reason to worry about a conflict breaking out.

‘There will be no war (between Iran and the U.S.) since there is no reason for a war,’ said rear admiral Ali Shamkhani, secretary of Iran’s Supreme National Security Council, quoted by the official news agency IRNA.

President Donald Trump decided to withdraw from Tehran’s nuclear deal with world powers a year ago. The White House separately said it was aware of reports of a missile strike on Saudi Arabia amid a campaign targeting the kingdom by Yemen’s Iranian-allied Houthi rebels.

Iran recently has quadrupled its production of low-enriched uranium and threatened to boost its enrichment closer to weapons-grade levels, trying to pressure Europe for new terms to the 2015 deal.

In recent weeks, the U.S. has sped an aircraft carrier to the Mideast and deployed additional troops to the tens of thousands already in the region. Mysterious attacks also have targeted oil tankers as Iranian-allied Houthi rebels launched bomb-laden drones into Saudi Arabia.

All this has raised fears that a miscalculation or further rise in tensions could push the U.S. and Iran into an open conflict, some 40 years after Tehran’s Islamic Revolution. 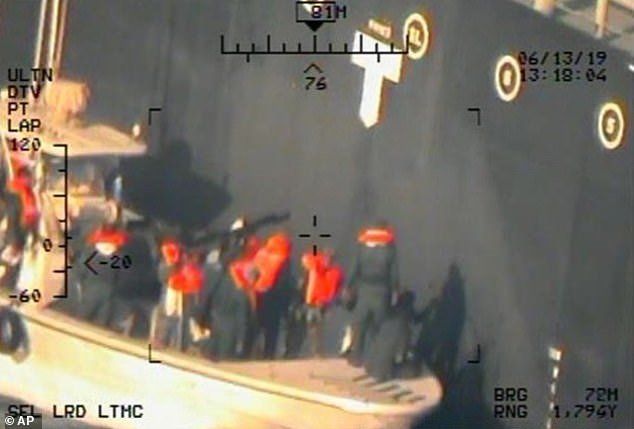 This image released by the U.S. Department of Defense on Monday, June 17, 2019, and taken from a U.S. Navy helicopter, shows what the Navy says are members of the Islamic Revolutionary Guard Corps Navy removing an unexploded limpet mine from the M/T Kokuka Courageous 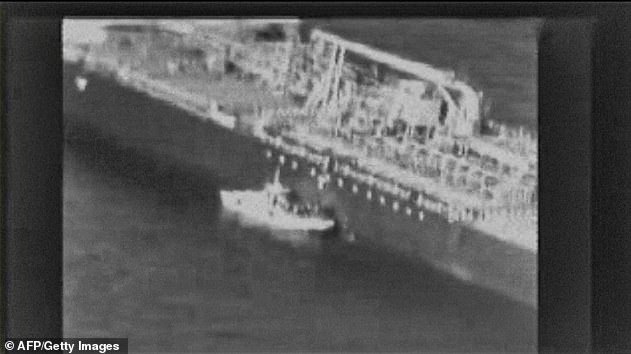 This grab taken from a video released by the US Central Command on June 13, 2019, reportedly shows an Iranian navy patrol boat in the Gulf of Oman approaching the Japanese operated methanol tanker Kokuka Courageous and removing an unexploded mine 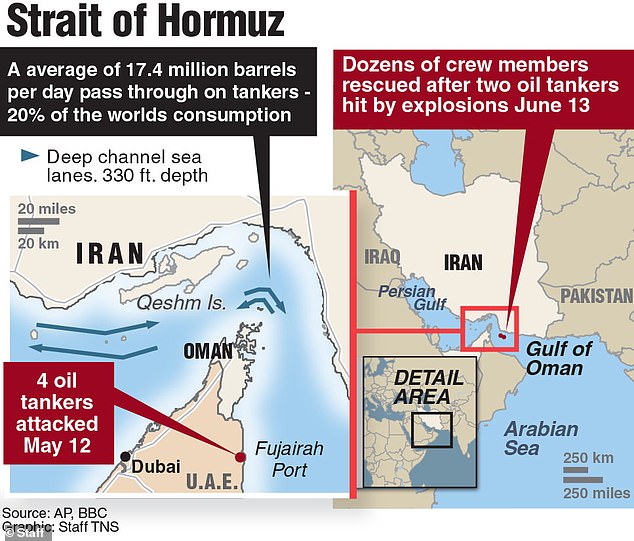 Meanwhile, White House spokeswoman Sarah Sanders said Trump had been ‘briefed on the reports of a missile strike in the Kingdom of Saudi Arabia.’

‘We are closely monitoring the situation and continuing to consult with our partners and allies,’ Sanders said.

The Houthi’s Al-Masirah satellite news channel claimed the rebels targeted a power plant in Jizan, near the kingdom’s border with Yemen, with a cruise missile. Saudi state media and officials did not immediately report a missile strike Thursday.

A Saudi-led coalition has been battling the Houthis since March 2015 in Yemen, the Arab world’s poorest nation now pushed to the brink of famine by the conflict. In recent weeks, the Houthis have launched a new campaign sending missiles and bomb-laden drones into Saudi Arabia.