US ‘deaths of despair’ surge to highest rates since 2005, report reveals

Deaths from alcohol, suicide, and drug overdoses reached an all-time high in the US in 2017, according to a new report.

These ‘deaths of despair’ have been deemed a ‘national crisis’ but a ‘regional epidemic’ by the Commonwealth Fund, which released its annual report on Wednesday.

Rates of these deaths have climbed across the nation, but the mid-Atlantic states – including Ohio, Pennsylvania and West Virginia – have been struck hardest by drug overdoses, driven by the ongoing opioid epidemic.

Since 2005, alcohol-related deaths have increased by 37 percent, the national rate of suicide has risen by 28 percent and drug overdose deaths have more than doubled, surging by 115 percent in just 12 years.

Deaths by drug overdoses (purple), suicide (blue) and related to alcohol (green) reached their highest levels in the US since 2005, a graph from the new Commonwealth Fund report shows

Deaths by suicide, alcohol and, especially, drug overdoses are decimating the US.

With the opioid epidemic at the helm, these deaths of despair have hit the nation so hard that the average American’s life expectancy has been driven down for the last three years in a row.

Though no state in the US is untouched by these devastating – and preventable – death tolls, some regions of the country have been impacted far worse than others.

Nowhere has suffered at the hands of the opioid overdose epidemic so much as West Virginia, where 57.8 out of every 100,000 deaths in 2017 was due to a drug overdose.

Even the next worst-impacted state, Ohio, saw significantly fewer deaths, with 46.3 deaths per 100,000 attributed to drug overdoses.

West Virginia’s death toll was more than twice that of the national average in 2017.

Researchers from the Commonwealth Fund write that ‘the overdose rate has moderated somewhat recently.’

However, there was still a 10 percent increase in these deaths between 2016 and 2017, so there is still much room for progress.

Alcohol and suicide continue to consistently fuel rising death tolls in the US as well.

While drug overdoses hit the eastern portion of the country, the central and western regions of the US have actually had more suicides and alcohol-related deaths than overdoses.

This was true in 2017 for Montana, Nebraska both North and South Dakota and Wyoming, according to the new report.

According to the Commonwealth fund, suicide deaths have risen steadily since 2005, but no jump in their rates in recent history has been so significant as the increases seen between 2016 and 2017.

The rise of alcohol related deaths has accelerated, too. 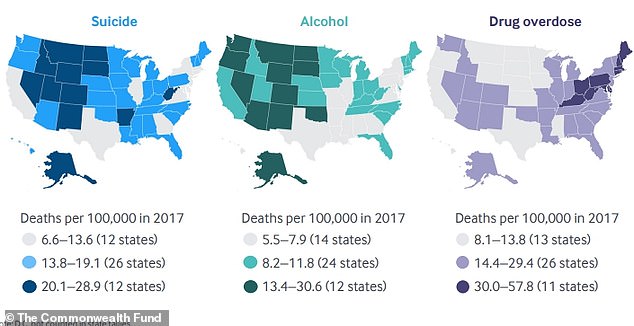 Maps from the new report show that the Western US has been hardest hit by suicide (blue) and alcohol (green), while the mid-Atlantic states have been struck by drug overdoses

Between 2005 and 2012, these deaths increased by about two percent each year.

These various deaths of despair are undoubtedly connected, but health officials have not yet worked out the exact, complicated, underlying causes, much less a comprehensive plan of attack to address all three categories.

Dr Sara Collins, an economist, vice president of health care coverage and access at the Commonwealth Fund and study co-author says that one thing shared by states disproportionately affected by deaths of despair is that they have all expanded Medicaid.

With the expansion of Medicaid – federally subsidized health insurance now available to anyone whose income is 138 percent of the federal poverty level, if their state adopted it – these states ‘at least have the tools to get people access to care and grapple with the opioid epidemic,’ Dr Collins told Dailymail.com.

States that have expanded Medicaid have seen improved access to naloxone, the opioid overdose reversal drug and one of the most important weapons in the arsenal against the ongoing epidemic.

Most states that adopted the expansion have low median incomes. These are also the states most affected by deaths of despair.

Still, each state has its own particular needs, says Dr Collins.

‘If I’m a policy maker, it’s important to know what we’re dealing with within a state,’ she says.

‘IF you lump them together, you can say they all require somewhat different tools.

‘The drug overdose epidemic may require different tools than alcohol-related mortality, because they’re similar and related, but different.’

Regardless, she adds that all of these states need a ‘federal partner’ backing and uniting their efforts to turn the tide of deaths of despair.