Victims slam Grenfell fraudster as husband stands by her

The husband of the council worker who stole £62,000 from the Grenfell fund appears to be standing by her after she admitted the shocking crimes yesterday.

Still wearing his wedding ring but refusing to comment on his wife’s actions, her husband Thomas McDonagh left his marital home in a dark Toyota car this morning.

When asked by MailOnline if he had any comment on his wife’s court hearing yesterday he replied, ‘no comment’, before closing the door.

Victims of the fire, in which 72 people died, have reacted in fury to the news that one of the people meant to be helping them was instead pocketing money for herself.

Survivor Beinazir Lasharie said: ‘There’s no words for how disgusting it is.’ 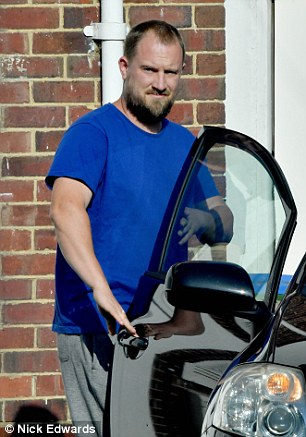 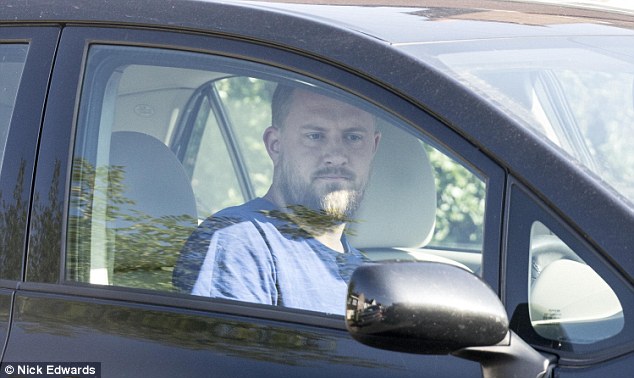 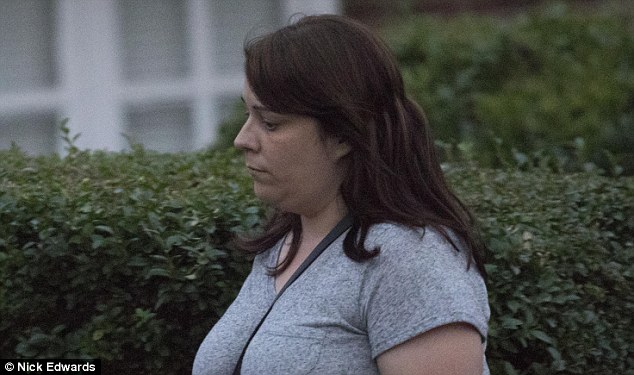 Ms Lasharie, who had lived most of her life on the Grenfell estate and suffered PTSD after the fire, told the Daily Mirror: ‘I’m shocked, somebody who knows what people have gone through and are going through on a daily basis would do ­something like that.’

According to her LinkedIn page, McDonagh studied accounting at London’s City University before holding position before working for Imperial College, the NHS in Kent and the Victoria and Albert Museum.

At her family home in east London today, her mother Eileen Barnard, 67, refused to comment.

Questions are now being asked about how the council could have allowed such a large amount of money to go missing.

Kensington MP Emma Dent Coad said: ‘How on earth did a Council officer steal £62,000 of Grenfell funding without missing it for so long? It brings up very serious questions about who had access to the prepaid cards she used, and who was responsible for auditing this.

‘A number of residents have already asked me if the Council will review this employee’s work over the past 14 months? She may have been making life-changing decisions with the lives of vulnerable people. They will be devastated.

‘This is a very serious breach of trust and the Council must conduct a full audit of donations to see if any more has been stolen.’ 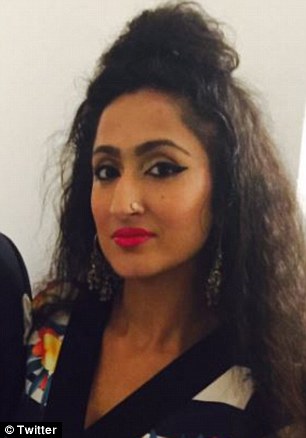 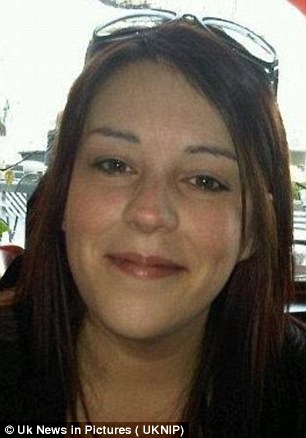 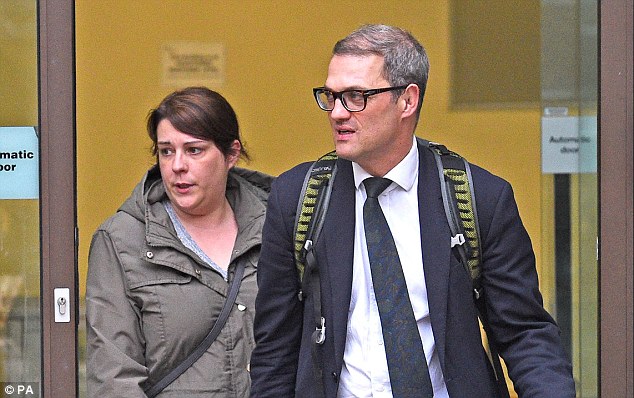 Jenny McDonagh (left) leaves Westminster Magistrates’ Court on Thursday evening after she pleaded guilty to fraud by abuse of position, theft by employee and money laundering 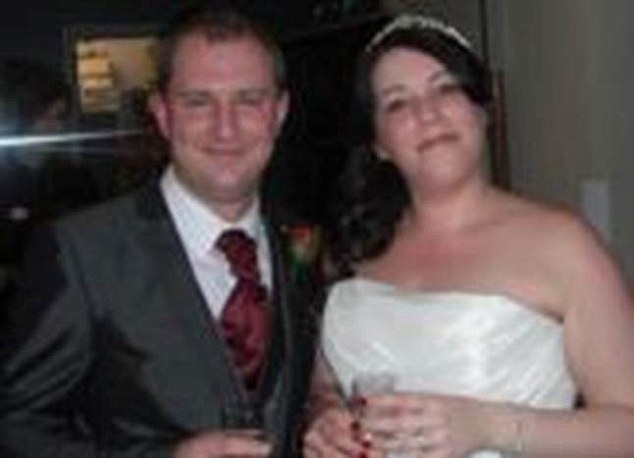 McDonagh, pictured with her husband Thomas, who, the court heard, ‘does not want her to return to the matrimonial home’ because of the scandal she had caused

A court was told McDonagh is also under investigation for suspected frauds against her former employers, Medway NHS Trust in Kent and the Victoria and Albert Museum in London.

Last night she was spotted returning to her marital home after the court heard her husband was willing to accept her back.

McDonagh pleaded guilty to two counts of fraud by abuse of position, one count of theft by employee and one count of money laundering this afternoon.

On her online CV she had listed the ‘creation and maintenance of a system of payment in instalments’ as one of her duties at the council.

McDonagh has been ordered to resign her new job as a finance officer at a mental health charity.

She was told by a chief magistrate to quit her new job and was warned she faced at least three years behind bars for the crimes. 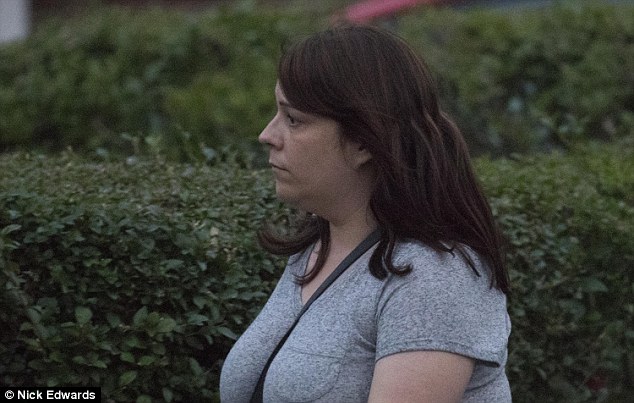 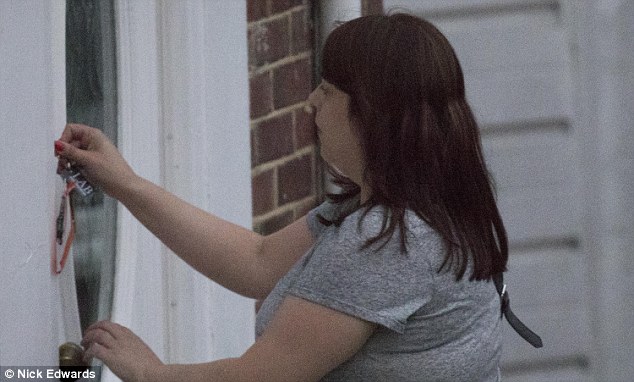 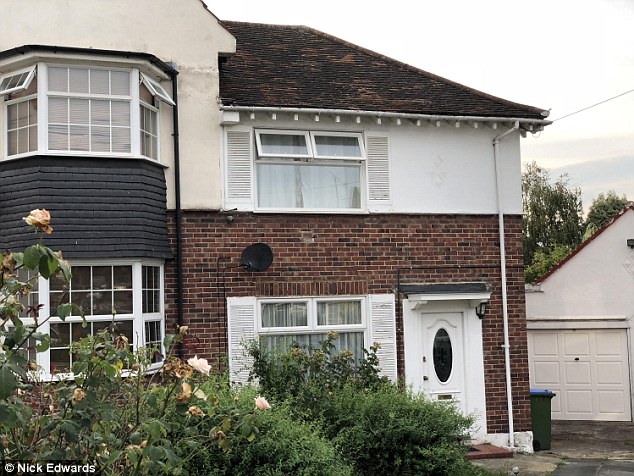 The south London home of Jenny McDonagh and her husband Thomas

What is the Grenfell victims fund and who is eligible for money?

According to the Charity Commission funds of £28.5million have been raised in donations for survivors of the fire and families of victims.

Money has come in from various charities including Artists for Grenfell and funds raised from football’s Community Shield.

The British Red Cross and the Kensington & Chelsea Foundation have been the leading fundraisers.

Expenditure from the fund has included £100,000 available to the next of kin of each missing person who has died or is declared missing presumed dead.

There were also payments of £3,500 for those who spent between six hours and four days in hospital.

Those who spent up to a week in hospital were eligible for £10,000 while victims who were seriously injured and needed to stay in hospital for longer than a week could receive £30,000.

The British Red Cross have a family travel fund and a grant of £8,000 will go to 26 households in Grenfell Walk.

Prosecutor Robert Simpson told Westminster Magistrates’ Court: ‘She’s someone who seems unable to stop herself.’ The prosecutor added: ‘She has another job at the moment, she’s a finance officer in a mental health charity.’

Chief magistrate Emma Arbuthnot said: ‘She must resign that job.’

McDonagh stole pre-paid cash cards while working as manager of the Grenfell Fire fund at the Royal Borough of Kensington and Chelsea, yesterday’s court hearing was told.

She even continued to use the stolen cards, which were meant for survivors without bank accounts, after police quizzed her under investigation in August 2018, the court heard.

In the case of one Grenfell victim, Edward Daffarn, he was given a pre-paid card by mistake, which McDonagh then used herself.

In total she took about £62,000 from pre-paid cash cards meant for several people, including Fadumo Ahmed, Sacha Salaabi and Christos Fairbairn, the court heard.

Prosecutor Mr Simpson said: ‘Mr Daffarn always indicated he wanted money paid into a bank account, however initially by error he was issued one of those top-up cards in his name.

‘He then indicated via his social worker he wanted payments to be made into his bank account.

‘The defendant continued keeping the top up card alive and was responsible for it being topped up and used it to the tune in the subject of the charge.’ 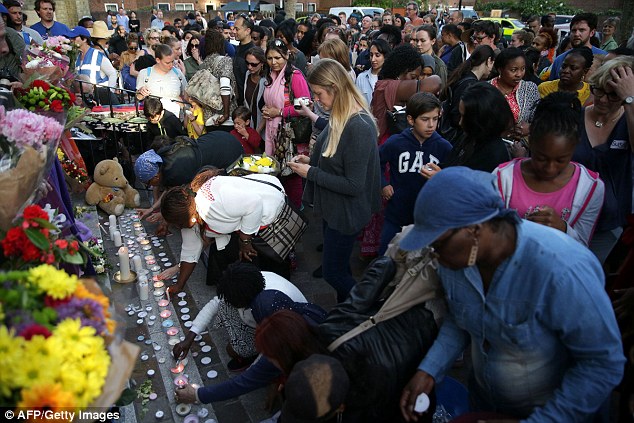 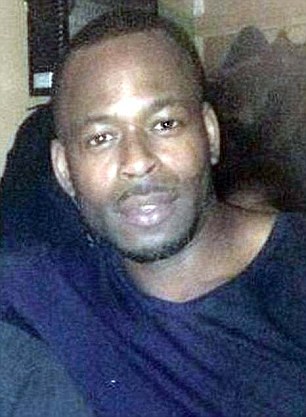 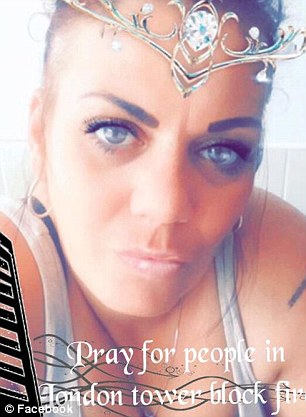 McDonagh took money from cards meant for Christos Fairbairn, who lived on the 15th floor of the tower was one of the last people to escape, and Sacha Salaabi, who is now one of the core participants in the Grenfell Tower inquiry

Mr Daffarn was among the Grenfell residents who expressed safety fears about the tower before the deadly blaze last June.

Prosecutor Robert Simpson described McDonagh as a ‘serial fraudster’ who ‘lives beyond her means and gambles’.

Mr Simpson added that the fraud was ‘unsophisticated’ because she left a ‘clear paper trail.’

He told the hearing: ‘It was unsophisticated. Even though she was using fraud funds she was booking restaurants and hair appointments and so-on in her own name, thus the guilty pleas.

‘Even though she was using fraud funds she was booking restaurants and hair appointments and so-on in her own name, thus the guilty pleas.’ 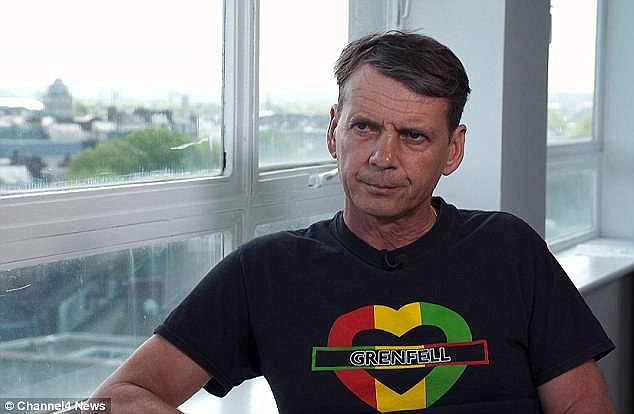 McDonagh took money from a card meant for Edward Dafforn, who had lived in Grenfell for 20 years and had campaigned about poor fire safety in the building

The prosecutor told the court that haircuts and dinners were booked under her own name.

Mr Simpson said McDonagh is married, but her husband originally did ‘not want her to return to the matrimonial home’ because of the scandal she had caused.

McDonagh’s husband is now willing to accept her back into the family home, the court heard.

Her defence solicitor Robert Katz said: ‘I have spoken to him. He’s prepared to take her back. He was not prepared to. It was the initial shock and the concern about the press. He had no idea about this.

‘He would like his wife back at home and he is supportive of her.’

A Kensington and Chelsea Council spokesman said: ‘We take fraud very seriously and we have always taken action to root out Grenfell fraud wherever it takes place.

‘Over many months our fraud team has worked with the police to build cases and push for prosecutions against anyone who sought to take advantage of last year’s terrible tragedy.

‘On this occasion it was one of our own members of staff who managed to defraud the council by getting past our own systems and processes. This is both shocking and unforgivable.

‘We discovered the fraud and took action straight away, including strengthening our internal processes. We apologise to the survivors and families for any distress this may cause.’

The prosecutor said McDonagh had previously worked for the Medway NHS Trust, which is also investigating her for fraud.

‘It’s suggested that she obtained about £35,000 by means of fraud when she was working for the NHS Trust.’

After leaving her job with the NHS, McDonagh then worked briefly for the Victoria and Albert Museum in London, where she is also suspected of committing fraud. 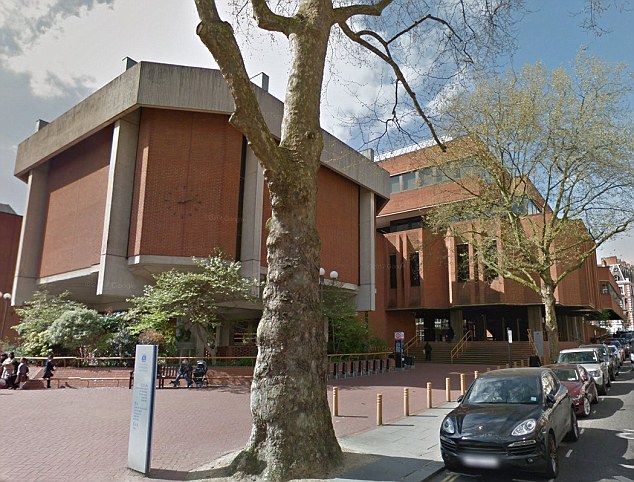 McDonagh was working at Kensington and Chelsea borough council, which came in for strong criticism over safety at the tower before and after the fire. The council HQ is pictured

Mr Simpson said: ‘She was then working for the V&A museum in the interim period between NHS and having this job being in charge of managing people from the Grenfell fire fund.

‘There’s again a fraud investigation going on into her behaviour at the V&A museum.

‘She was using her position to alter vendors’ details on the system from having no bank account details to having her own personal Santander account details. That fraud had not got far enough for her to obtain anything from it.’

But, Mr Simpson said: ‘The person who was dealing with that over the telephone said that was a more complicated fraud, there was quite a lot of material. The NHS one is in the same position.’

He added: ‘She has, I’m told, friends in LA, she’s already been to LA once this year. I’m told there is a trip to LA booked in October this year.

‘Her husband does not want her to return to the matrimonial home as he doesn’t want the press hanging around his house. The great worry is she gets another job and carries on defrauding.’

McDonagh, who appeared in the dock wearing a large green coat, showed no emotion as the details of her offending were relayed to the court.

McDonagh was bailed ahead of her sentencing in about one month at Isleworth Crown Court. 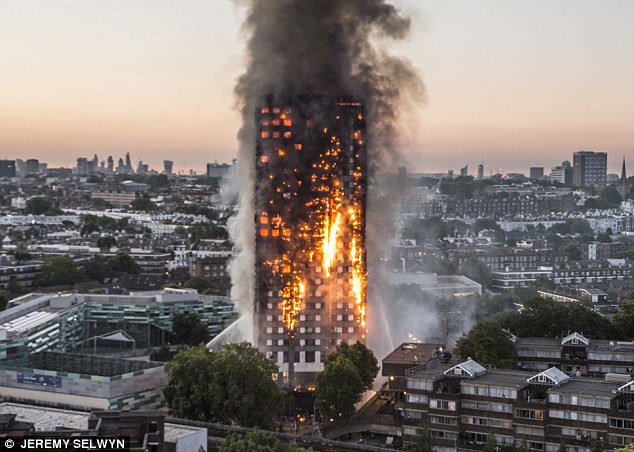 The conditions are that she must inform the police if she plans to accept further work, wear an electronic tag, surrender her passport and not apply for any travel documents.

Scotland Yard declined to comment on whether she would have any police protection until the sentencing.

The magistrate said: ‘There’s a starting point of three years. There are a number of aggravating factors, I suspect there is a gambling habit that’s behind some of this.’

She becomes the 11th person to be charged with fraud offences relating to the Grenfell disaster, with five people put behind bars.

Some 72 people died as a result of the fire on June 14 last year.