A shock new coronavirus case has been discovered in Melbourne after a man from the city’s east flew home from an infected Perth quarantine hotel.

The man contracted the virus from a positive case who was staying on the same floor of his hotel, Victorian Health Minister Martin Foley said.

He was told by Western Australia health officials on arrival into Melbourne on April 21 he was a close contact of a confirmed case and has been in self-isolation since.

Nursing staff at the mass vaccination hub at the Royal Exhibition Building in Melbourne on Wednesday. A shock new coronavirus case has been discovered in the city after an infected traveller flew into Victoria from a Perth quarantine hotel

Contact tracers are now racing to find other passengers who shared Qantas flight QF778 with him from Perth to Melbourne on Wednesday afternoon.

All passengers on that flight must get tested and self-isolate for 14 days.

The traveller from the city’s eastern suburbs is believed to have undergone hotel quarantine in the room next door to the confirmed case, The Herald Sun reported.

His positive test result at 2am on Friday morning marks the first community case of Covid-19 in Victoria in 55 days.

The man is asymptomatic and has three household contacts – his partner and two children.

Health authorities said all three must also get tested and isolate for two weeks. 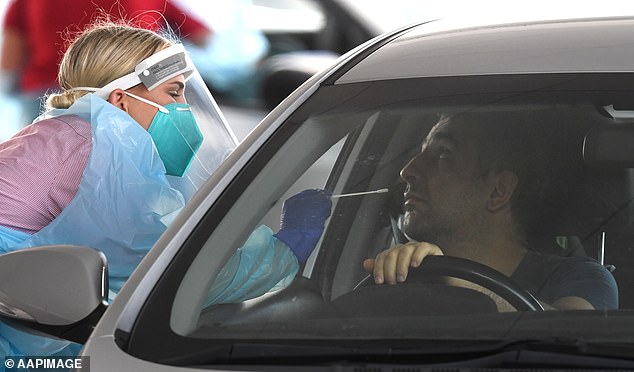 A man undergoes a Covid-19 test at a drive-in testing site on March 30. Contact tracers are racing to find passengers who flew on a Qantas QF778 flight from Perth to Melbourne

‘This is an important and timely reminder this global pandemic is not over,’ Mr Foley said.

‘Victorians have been down this path. We know the drill.. We will do the right thing to keep this to one case, at the moment.’