By Cameron Carpenter For Daily Mail Australia and Aap

Victoria will house Covid-19 patients in two transformed quarantine hotels, as part of an effort to ease pressure on the state’s medical system as Omicron continues to spread.

The ‘medi-hotels’ will be used to house patients who are nearing the end of their hospital stay and in need of lower-level care, with 300 beds made available.

They will still be considered inpatients and nursed back to health by staff from Northern Health and the Royal Melbourne Hospital.

Premier Daniel Andrews announced the change on Thursday and said the current wave of Covid infections could cause the health system to buckle.

Dan Andrews says most Covid patients don’t require intensive care, so can be cared for in a hotel by doctors and nurses

‘We have some people that are gravely ill, some people in intensive care, but the vast majority of people are in hospital and not requiring that sort of care,’ he said.

Acting health minister James Merlino said the hotel facilities will provide an ‘extra buffer’ as the number of patients continues to rise at hospitals.

‘Today’s announcement is a sensible next step to support our frontline workers to help alleviate the pressure on the system,’ he said.

‘All patients will be medically assessed by the hospital before transfer to ensure that they are well enough to be relocated. They’ll remain under the care of the hospital and still be considered an inpatient even while they’re in the medi-hotel.’

Emma Cassar, the commander of COVID-19 Quarantine Victoria, said the first of up to 300 patients would start arriving at the hotels from Monday. 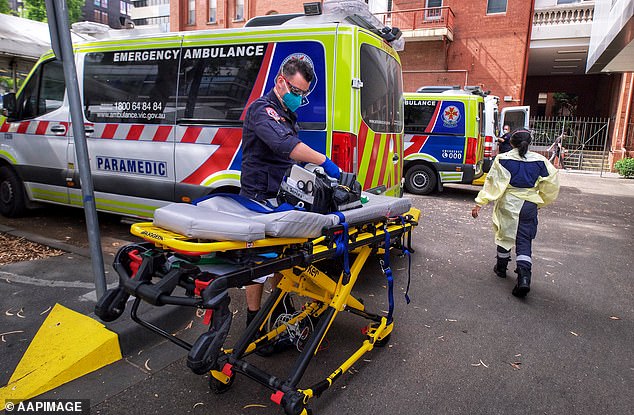 The idea was the brainchild of staff from Victoria’s dedicated quarantine agency and was endorsed by health authorities.

Meanwhile, questions still linger about whether the state has enough rapid tests to allow more workers to be released from isolation.

The list of workers exempt from isolating as close contacts will be broadened from midnight on Tuesday to include those in emergency services, education, critical utilities, custodial facilities, transport and freight.

Health care, food distribution, manufacturing, packaging and retail supermarket workers are already exempt, while state government project workers will not be included in the list.

Exempt workers who opt-in must wear a face mask at all times and undertake daily rapid antigen tests for five days, with negative results before attending work, with employers expected to provide RATs to employees.

Premier Daniel Andrews said Victoria is expecting to receive about two-and-a-half million RATs from the national stockpile and has ordered another 44 million.