An Australian father-of-three faces spending Christmas away from his family after flying to Indonesia to help fight the country’s bushfires only to be left stranded by Covid-19 border restrictions.

Tom Henderson – who has three children aged four, two and 11 months – travelled to Indonesia in June but has struggled to find a flight home after Australia further limited international arrivals in July to ease pressure on hotel quarantine.

After both flights he booked in August were cancelled, the Victorian firefighter has now been told the earliest trip home available is January 11 – almost four months away.

His wife Ashley broke down on national television on Wednesday as she told of the emotional toll the separation has taken on her and the couple’s children.

‘It’s tough – my son said to me the other day, “Daddy’s never coming home”,’ she told the Today show as she wiped tears from her face.

‘When you are away from your family like that that’s the worst thing you can hear from your child, isn’t it?’

Mr Henderson said securing a seat on a flight home felt nearly impossible as airlines appeared to be continually reselling tickets to the highest bidder.

The firefighter said airlines had ‘essentially taken control of hotel quarantine spots’ after the federal government cut international arrival caps in half on July 14.

‘Seats are booked and rebooked, sold and resold, until close to your flight date and then, I guess, the highest bidder takes the ticket,’ he said.

Mrs Henderson earlier told how her husband had little option but to take on the work in Indonesia. 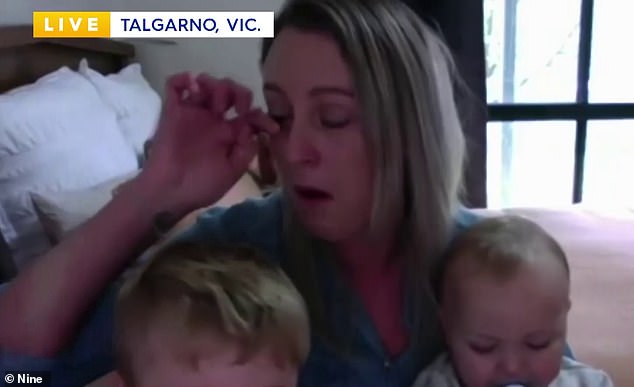 ‘He didn’t have any other choice but to go. There wasn’t really any other option for work for him,’ she told ABC Goulburn Murray.

‘We knew that risk before he left.’

‘But when he left things were looking better, people were getting vaccinated and the government was telling us things were starting to open up.’