Astonishing moment Chihuahua puts SUV in gear, reverses out of a gas station and across a busy four-lane highway WITHOUT CRASHING – as helpless owner chases behind

This is the incredible moment a Chihuahua was seen on surveillance camera reversing a car out of a Louisiana gas station while its owner was busy filling up.

Footage shows the 5lb pet operating the SUV on Friday evening in Slidell and according to police it managed to switch gears, causing the vehicle to roll back.

Video shows a woman at the pump on Gause Boulevard reacting as the motor backs out and glides across a four-lane highway.

She is recording taking a tumble as she tries in vain to stop the car emerging into traffic whizzing by but luckily it comes to rest at a gas station directly across the street.

A 5lb chihuahua, who was inside of an SUV, put the vehicle in reverse Friday in Louisiana

Despite vehicles seen quickly driving by before the SUV entered the road, it avoids being hit and makes it across to the other side without a scratch.

Authorities said it was a miracle that no one was seriously injured and that no other vehicles were struck during the incident.

However the owner did sustain a minor injury while trying to chase down the vehicle.

It was later discovered that the dog did not have to push any pedals to get the car going.

The vehicle had a mechanical issue, which allowed the transmission to change gears without anyone having to press the brake. 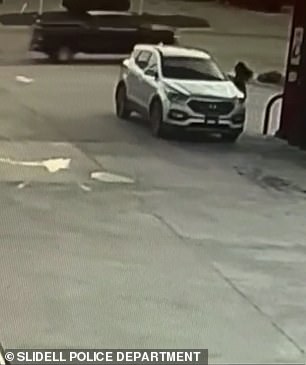 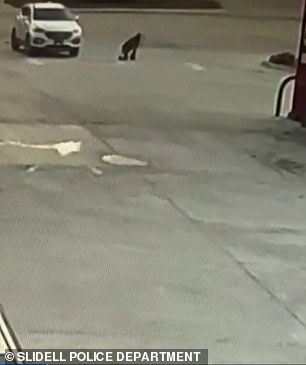 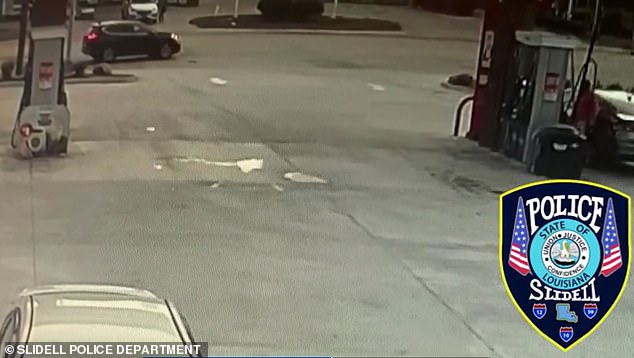 In a tweet showing the furry friend sitting in the driver’s seat, Slidell Police wrote: ‘We Can’t Make This Stuff Up!’

They added on Facebook: ‘Let this be a lesson to everyone to please use caution when leaving pets inside of your vehicle!’

Astonished social media users questioned why the car was not off as the couple refueled.

Many joked about whether the tiny animal was cited for driving without a licence.

‘I’ll add this to the list of reasons I give to my 5lb Chihuahua as to why she must always be strapped into her safety seat while riding on our vehicles,’ one person commented on Facebook.

Another replied:’ Agree or pull the Emergency brake when you get out even if just to pump gas.’ 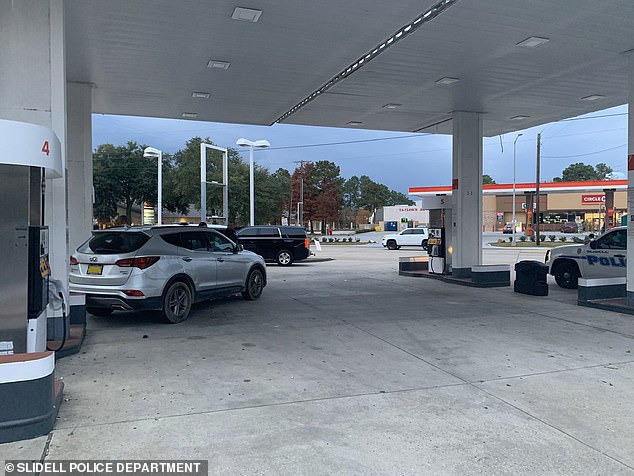 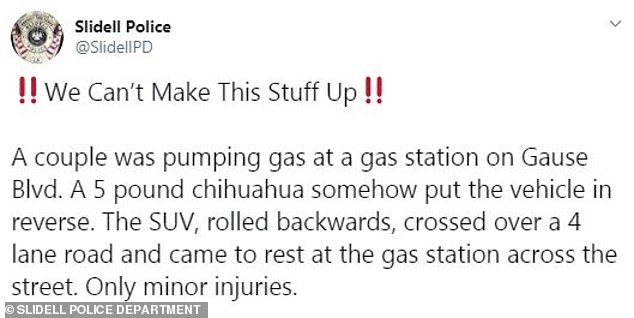 It was later discovered the vehicle had a mechanical issue, which allowed the transmission to change gears without someone having to press the brake