The BBC has tonight denied axing political journalist Andrew Neil in their latest round of job cuts, saying he is ‘in talks’ over a new TV role.

The veteran broadcaster’s political programme -The Andrew Neil Show- has not been on the air during the coronavirus pandemic, and the corporation today confirmed the show will not be returning.

It comes as the corporation has announced plans to cut a further 70 jobs from its news division, meaning the total number of job losses is expected to be 520.

Viewers have criticised the BBC for pandering to ‘cancel culture’ and ‘Left-wing, pro-Remain establishment elitists’, with Labour MP Wes Streeting tweeting: ‘The cancellation of @afneil’s show is great news for those in power wishing to avoid scrutiny and a shame for everyone else.’

Mr Neil, 71, made no comment today but shared social media posts from viewers and public figures criticising the BBC’s decision and praising his tenacious interviewing style.

However a BBC source told the MailOnline tonight they currently in discussions with the veteran broadcaster – famed for his forensic no-holds-barred interviews – to start a new interview series on BBC1.

The source said: ‘Any talk of letting go of Andrew totally misses the mark. We’re huge fans of Andrew’s long-form political interviews and are actually hoping to put a show like this on BBC One, rather than BBC Two.’

‘We remain committed to Andrew Neil’s in-depth interviews (as well as the Budget, US Election and other Specials). The Andrew Neil Show will not be returning but we’re in discussions about a new interview series on BBC1’. 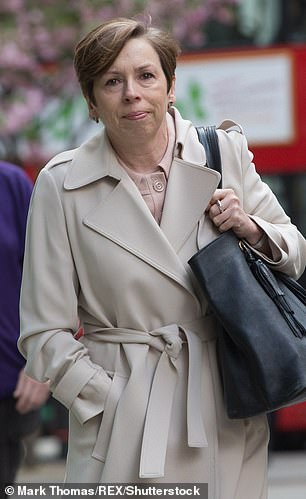 Andrew Neil’s political programme has not been on the air during the coronavirus pandemic, but the broadcaster said the show will not return even as the crisis subsides. A BBC spokesman told MailOnline that Mr Neil, 71, will not present Politics Live on a regular basis and head of news Fran Unsworth (right) there are no plans to replace his show with anything similar 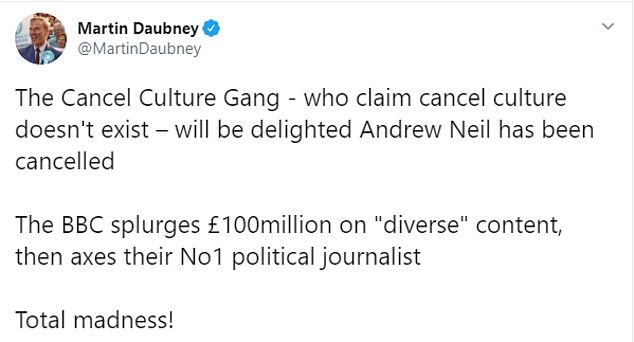 Furious viewers slammed the BBC for axing Mr Neil’s short-lived show, with Labour MP Wes Streeting tweeting: ‘The cancellation of @afneil’s show is great news for those in power wishing to avoid scrutiny and a shame for everyone else’

From the ‘Empty Chair’ to Owen Jones: Some of Andrew Neil’s ‘greatest hits’ at the BBC 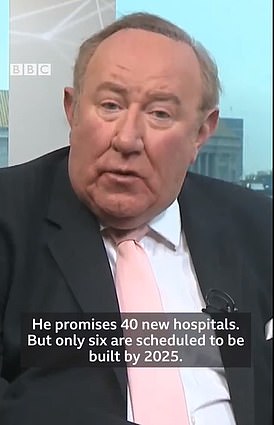 Mr Neil delivered a direct interview challenge to Boris Johnson during the 2019 General Election, telling him it was ‘not too late’ to accept his invitation to chat before the poll.

Mr Johnson had refused to be interviewed by Mr Neil, who had spoken with Labour’s Jeremy Corbyn and the Lib Dems’ Jo Swinson.

During an ’empty chair’ moment,Mr Neil said: ‘There is of course still one to be done, Boris Johnson. We have been asking him for weeks now to give us a date, a time, a venue. As of now, none has been forthcoming.’

‘It is not too late. We have an interview prepared. Oven-ready, as Mr Johnson likes to say. The theme running through our questions is trust – and why at so many times in his career, in politics and journalism, critics and sometimes even those close to him have deemed him to be untrustworthy.

‘It is, of course, relevant to what he is promising us all now.’

Mr Shapiro was subjected to a tough interview by Mr Neil about previous remarks he had made, including ‘Israelis like to build, Arabs like to bomb crap’ and his support for new abortion laws in Georgia.

The American, formerly of Breitbart, then accused Mr Neil of bias and suggested abortions after more than six weeks of pregnancy were brutal.

‘You purport to be an objective journalist,’ Mr Shapiro said. ‘The BBC purports to be an objective, down-the-middle network. It obviously is not, it never has been, and you as a journalist are proceeding to call one side of the political aisle ignorant, barbaric and sending us back to the dark ages.’

Mr Shapiro later said that he had been ‘destroyed’ by Mr Neil in the interview.

Mr Neil and commentator Owen Jones clashed in a row during the broadcast of the This Week programme.

The row began after Mr Jones made a film about far-Right protesters who harassed him and other journalists.

During the debate, Mr Jones raised Mr Neil’s work outside his role at the BBC as chairman of the Press Holdings media group which publishes the weekly magazine The Spectator.

As the debate drew to a close Mr Jones claimed the editorial line of The Spectator and other papers legitimised some far-Right views, provoking an angry response from Mr Neil.

Mr Neil told Mr Jones: ‘Your smears and lies about me are not going to be dealt with tonight so just move off it.’

Mr Neil delivered a rousing speech against the Paris attackers who ‘slaughtered 132 innocents to prove the future belongs to them, rather than a civilisation like France’.

In his rousing message, he listed the artists and theorists who shaped French culture and who overshadow ISIS’s beliefs and acts.

‘Versus what? Beheadings, crucifixions, amputations, slavery, mass murder, medieval squalor and a death cult barbarity that would shame the Middle Ages.’

He then thundered: ‘I think the outcome is pretty clear to everyone but you. You will lose. In a thousand year’s time, Paris, that glorious city of lights, will still be shining bright as will every other city like it. And you will be as dust, along with the ragbag of fascist Nazis and Stalinists that previously dared to challenge democracy and failed.’

His colleague Rupert Lowe said: ‘Axing Andrew Neil (@afneil) is a ridiculous decision. The one journalist who was capable of putting together a decent interview. The BBC’s reputation goes lower and lower. I wonder which overpaid stars continue on the gravy train’.

Kate Hoey tweeted: ‘If @afneil no longer on the BBC makes it much easier to stop watching ANY of their political coverage’.

Pro-Brexit pundit Darren Grimes said: ‘The BBC seem to be doing all they can to make the case for axing the telly tax’.

One social media user commented: ‘Of course they [the BBC] couldn’t let such prolific ‘social justice’ campaigners go. Watch them on all channels.’

Another tweeted: ‘The BBC without Andrew Neil is a much poorer institution. When so much content reveals editorial bias across so many channels, he’s one of the journalists you can rely on to really grill everyone’.

Mr Neil last week said that his future at the BBC was in doubt and that he may be ‘surplus to requirements’.

He told The Radio Times: ‘I would like to be doing more shows, of course I would. I don’t know what’s happening.

‘There’s no clarity at the moment, so I’m just waiting for the BBC to make up its mind,’ he added, before hinting that he was weighing up his options.

‘Let’s say I’m looking at the portfolio and shaking up the mix,’ he said.

‘I mean, we’re all thinking about the balance of our lives, aren’t we?’

The BBC said the decision ‘addresses the BBC’s worsening financial position and draws on the experiences of operating’ during the coronavirus pandemic.

Head of news Fran Unsworth said: ‘During this crisis audiences have turned to BBC News in their millions and I’m incredibly proud of what we, as a team, have been able to achieve.

‘But if we don’t make changes, we won’t be sustainable. This crisis has led us to re-evaluate exactly how we operate as an organisation.’

BBC plans include having fewer reporters overall, while more correspondents will be asked to work across a range of content. It will invest in new community affairs roles around the country, while reducing numbers in London.

The BBC added that ‘digital is at the heart of our journalism’ and that it ‘a new original journalism team will also be created, incorporating several staff from the Derbyshire show, to pursue under-reported and exclusive stories’.

Politics Live, currently airing on Wednesdays, will return four days a week. Over 100 MPs and peers called on the BBC this month to protect the programme from the axe.

BBC Parliament will ‘focus on live and as-live coverage of the elected chambers across the UK and produce daily and weekly highlights programmes’.

The BBC said it will ‘no longer commission most of the other bespoke programmes we currently make for BBC Parliament, although we will continue to draw on our archive to broadcast our popular historical election coverage’.

In January the BBC announced plans to cut 450 jobs in a bid to save £80million, which included axing the popular Victoria Derbyshire Show.

The corporation postponed those job cuts and the decision to end free TV licences for the over-75s in the wake of the coronavirus outbreak.

That contributed to a further budget shortfall, meaning that the number of proposed job losses in news has increased by 70 posts.

Ms Unsworth announced that BBC News will concentrate on fewer stories, with journalists pooled in centralised teams rather than working for specific programmes.

The BBC News Channel and BBC World will continue to share some output, although they will remain separate channels.

Ms Unsworth said: ‘Covid-19 has changed all of our lives. We are still covering the most challenging story of our lifetimes.

‘During this crisis audiences have turned to BBC News in their millions and I’m incredibly proud of what we, as a team, have been able to achieve.

‘But if we don’t make changes, we won’t be sustainable. This crisis has led us to re-evaluate exactly how we operate as an organisation.

‘And our operation has been underpinned by the principles we set out earlier this year – fewer stories, more targeted and with more impact. 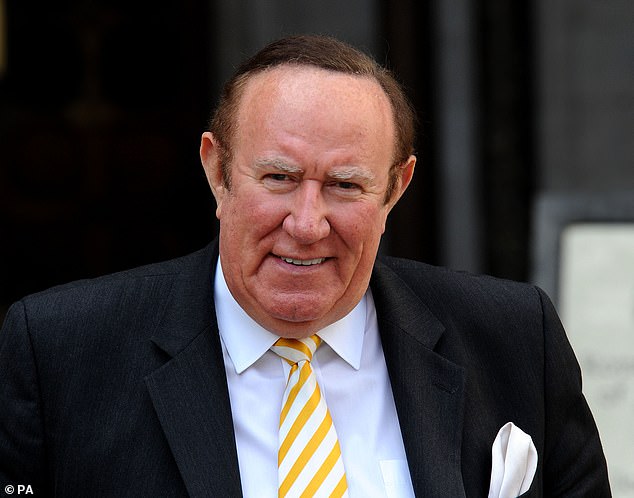 The BBC today revealed The Andrew Neil Show will end as the corporation slashes a further 70 jobs in BBC News, taking the total number of redundancies to 520

‘We’re aiming to reach everyone, every day. For BBC News to thrive, and for us to continue to serve all our audiences, we have to change.’

‘BBC News is one of the most trusted brands at home and abroad. In an era of fake news and during an unprecedented health crisis this trust in a public service broadcaster is critical,’ said Bectu head, Philippa Childs.

‘The government needs to take back responsibility for free licence fees for the over-75s, providing precious resources that would allow BBC News to continue to provide its world-leading range of news broadcasting.’