Good Morning Britain viewers today slammed a shouting mother who claimed the MMR vaccine ‘doesn’t work’ in a row with a doctor on television.

Biba Tanya appeared on the ITV show in a controversial segment about the MMR vaccine but soon began talking over the hosts and other guests.

As well as incorrectly claiming the measles, mumps and rubella vaccine doesn’t work, she claimed ‘measles isn’t a serious condition’.

Viewers have called Ms Tanya a ‘screaming banshee’, ‘a deluded old b****’, ‘nasty’ and ‘very aggressive’.

The MMR vaccine has been proven to be safe and effective, and has been routinely given to children in the UK for decades, preventing thousands of deaths.

Biba Tanya (pictured centre, beside Catherine Cooper, who was pro-vaccination, and Good Morning Britain’s Dr Hilary Jones, right) has sparked outrage online after claiming the MMR vaccine ‘doesn’t work’ and shouting over other guests on the show this morning

Ms Tanya, a mother-of-three, appeared on the show alongside another mother, Catherine Cooper, who was in favour of vaccination but struggled to get a word in.

Having been on the show before to discuss home-schooling her children, claiming she can do a better job than teachers, Ms Tanya said: ‘I know the vaccine doesn’t work.’

She said her own child had been ‘damaged’ by the vaccine, being hospitalised with suspected meningitis after having the jab and catching measles in spite of being vaccinated.

Ms Tanya claimed measles is ‘not a killer disease in a healthy child’, arguing that children who had died in the past had been unhealthy to begin with.

This was disputed by Dr Hilary, who said measles is ‘absolutely’ a serious condition and can kill children.

After being told to calm down by GMB host, Ben Shephard, Ms Tanya continued: ‘I want my child to develop their immune system.

Dr Hilary said: ‘Anyone who wants to go back to the pre-vaccination era is really not understanding what science has achieved.’ 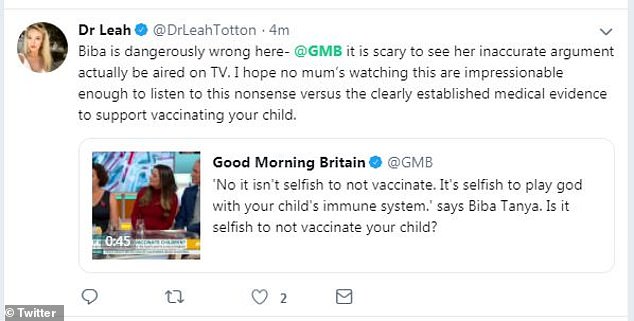 Dr Leah, a qualified doctor and former winner of The Apprentice, said: ‘Biba is dangerously wrong here. It is scary to see her inaccurate argument actually be aired on TV

Data at the beginning of this month showed there have been 903 cases of measles, which can be deadly to children, in the UK this year – more than triple the figure for the whole of 2017.

And there have been outbreaks across Europe, with more than 40,000 cases in the continent in the first six months of 2018, with 37 people dying of the condition.

Experts say lower vaccination rates are partly to blame for the rising number of cases of the deadly infection.

The uptake of both doses – at one year old and again at age three – is now around 87 per cent in England, short of the 95 per cent target needed to stop measles spreading.

The 95 per cent target is in place to ensure herd immunity, which is when so many people have been vaccinated against an infection that even those who haven’t are protected.

Professor Dame Sally Davies, England’s chief medical officers, this month slammed anti-vaccine campaigners, saying:  ‘Over 30 years we have vaccinated millions of children. It is a safe vaccination, we know that, and we’ve saved millions of lives across the world.

‘It is scary to see her inaccurate argument actually be aired on TV.

‘I hope no mum’s [sic] watching this are impressionable enough to listen to this nonsense versus the clearly established medical evidence to support vaccinating your child.’

User Carly Pierro added: ‘That woman was an abomination … Shouting screaming and getting aggressive with her “facts” she probably found on a Facebook group.’

Hilary Philip tweeted: ‘Nothing wrong with feeling passionate about your beliefs but come on, a bit of decorum less looking like a wee screaming banshee’.

Vaccination rates, now at 91 per cent in the UK, fell after the publication of a study by Andrew Wakefield in 1998 which claimed the jab could cause autism.

The study has found to be wrong and Wakefield was struck off and banned from practising medicine in the UK – he now lives in the US, where the ‘anti-vaxxer’ movement continues.

But experts continue to hammer home that the vaccine is safe and it works – saying those who believe otherwise are ‘absolutely wrong’.

In response to Ms Tanya’s outburst, Chris Manning tweeted: ‘Vaccines save millions every year. I can’t believe in this day and age we’re actually debating this.’

Sally Plummer, who claimed to be a nurse and a mother, added: ‘It’s ill informed individuals like Biba who’s spouting of ignorant propaganda puts the health of our whole society at risk.’

A user called Koren tweeted: ‘People that get so crazy and passionate in a group discussion do not get taken seriously and just look nasty and deluded!’

User Carly Pierro added: ‘That woman was an abomination’, suggesting she got her ideas about vaccination from a Facebook group instead of using scientific facts

Chris Manning tweeted: ‘I can’t believe in this day and age we’re actually debating this’

Sally Plummer, a nurse and mother, said people holding Ms Tanya’s views are ‘putting the health of our whole society at risk’

A user called koren said Ms Tanya was ‘very aggressive’ and was acting ‘crazy’ – people should trust doctors instead, she said

Martin Van Buren took issue with GMB showcasing the discussion and giving airtime to anti-vaccine views, which he said ‘could cost lives’

Polly Stanley wrote: ‘I couldn’t have my children vaccinated against measles for medical reasons and they were so poorly when they got it’.

While others took issue with GMB even having a discussion on the issue in the first place, saying it’s dangerous to spread ideas about vaccines being unsafe.

Martin Van Buren tweeted: ‘There isn’t a “Debate” to be had on this one. This is irresponsible to the max, you could cost lives with this.’