A 28-year-old man who ‘sl*t shamed’ Tinder users on Facebook has been jailed for sending his ex-girlfriend’s nudes to another former lover.

Zane Alchin, from Caringbah in south Sydney, became embroiled in a love-triangle drama when he sent explicit images of an ex-girlfriend, referred to as HL, to a different ex-girlfriend, identified as RM, through Instagram in December 2018.

At the time of offending, Alchin was was serving an intensive corrections order after he smashed RM’s phone, snapped her iPad and cut up $2000 of her lingerie when the couple had reunited in May 2018, St George Shire Standard reported.

Alchin had broken up with HL in February 2018 and was prohibited from contacting her after he was convicted of damaging her car amid the breakup.

Zane Alchin (pictured), 28, as been jailed for sending his ex-girlfriend’s nudes to another former lover

‘On December 29 HL received an Instagram direct message from RM saying ”I thought you had the right to know Zane’s been sending me photos of you”,’ police facts said.

‘I’m not trying to start anything, it just pisses me off and you have the right to know.’

Alchin’s messages were screenshotted by RM and sent to HL.

The messages included a picture of HL’s vagina and buttocks and another of her face with her arms covering her cleavage.

HL had cut off contact with Alchin after the end of their relationship but he emailed her dozens of times between November 11 and December 29.

Police facts said Alchin emailed the victim 15 times between 7am and 9.30pm on November 15.

One of the emails said: ‘Do you want sit on my d*** tonight?’ and the victim replied ‘f*** off’, according to police facts.

In an email opened on November 20, HL saw a graphic image of a penis covered in what she understood was blood. 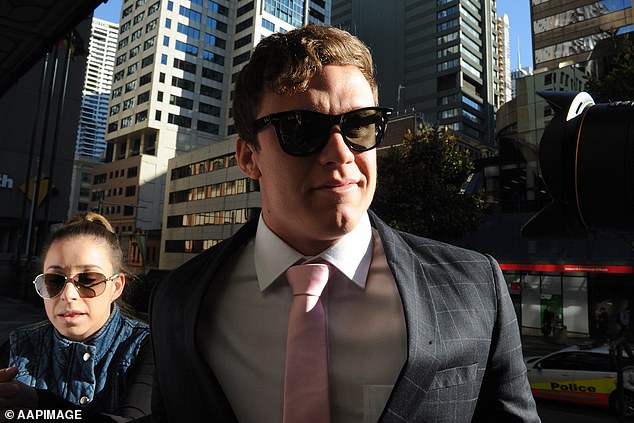 Alchin, who was denied bail, pleaded guilty to contravening a apprehended violence order and distributing an intimate image without consent

An email on November 25 asked whether the victim would engage in group sex with Alchin and his friend and offered to pay her money for the act.

Alchin, who was denied bail, pleaded guilty to contravening a apprehended violence order and distributing an intimate image without consent.

The Caringbah man was also found guilty in 2016 of using a carrier service to menace or harass.

Alchin was convicted for a series of hateful comments he made online, harassing and shaming female Tinder users.