Visa dumps Morgan Freeman as voice of commercials amid allegations

Visa is the latest organization to distance itself from Morgan Freeman after eight different women alleged sexual harassment and misconduct against the star.

On Thursday night, Visa said it had stopped its marketing campaign which features Freeman’s voice in light of the claims.

‘We are aware of the allegations that have been made against Mr. Freeman. At this point, Visa will be suspending our marketing in which the actor is featured,’ a spokesman said.

Earlier in the day, TransLink, Vancouver’s public transit system, said it too would stop using advertising material which featured the actor.

The Screen Actors Guild is now considering stripping Freeman of the lifetime achievement award it gave him in January.

‘These are compelling and devastating allegations which are absolutely contrary to all the steps that we are taking to ensure a safe work environment for the professionals in this industry,’ a representative for the Guild told TMZ.

Freeman, one of Hollywood’s most popular actors who has commanded international affection for years, accepted the award in January.

He was welcomed to the stage by Rita Moreno, a long-time friend who he kissed on the mouth after walking to the stage.

Freeman used his speech to complain that the statue was ‘gender specific’.

He accepted the award graciously, saying: ‘This is beyond honor, this is a place in history.’

Afterwards, he walked off stage with Moreno, he kissed her on the mouth again.

The SAG Awards featured a female-only line-up of presenters in a nod to the fervent #MeToo and Time’s Up movements. 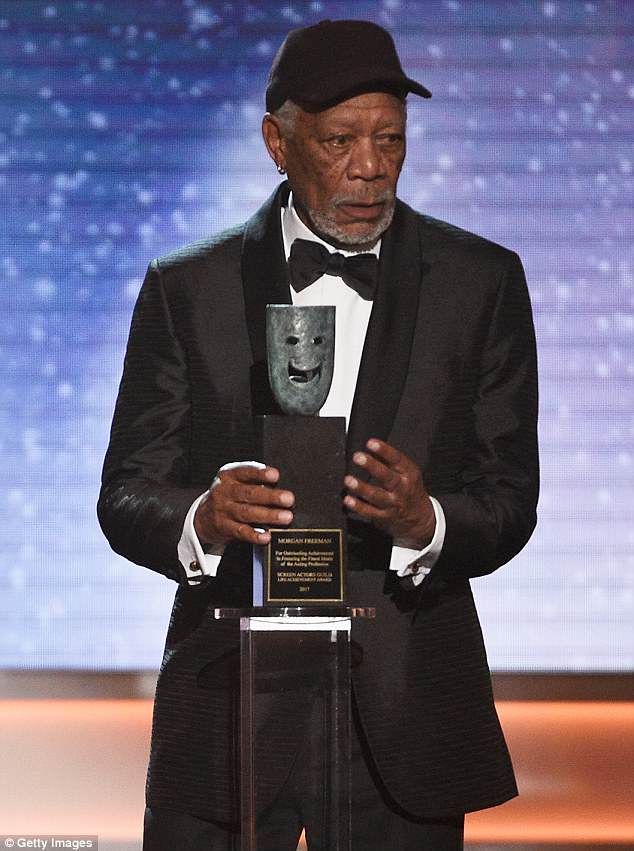 The snubs come after a damning CNN report published on Thursday in which eight different women alleged misconduct including a young production assistant who claims he lifted her skirt up repeatedly while they worked together on the set of Going In Style in 2015.

The allegations against Freeman are not on the same level of aggression as those against Harvey Weinstein.

Freeman’s accusers say he harassed them verbally by making consistent comments about their bodies or the way they dressed. 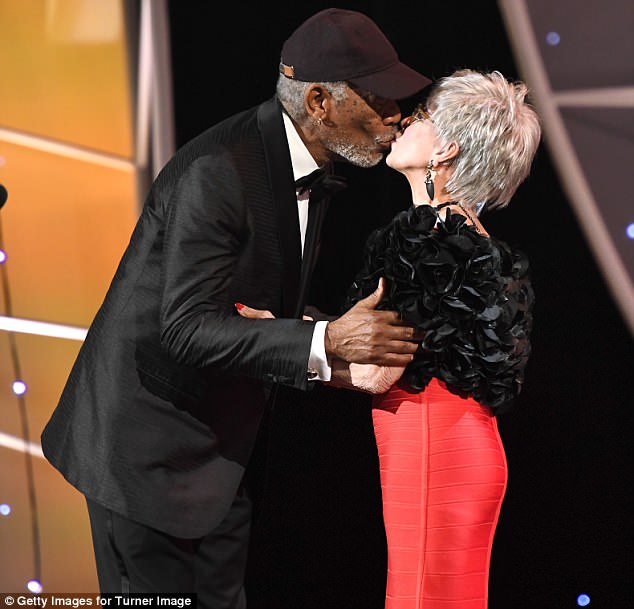 Freeman accepted the award from longtime friend Rita Moreno. He then used his speech to complain about the SAG statue being gender specific 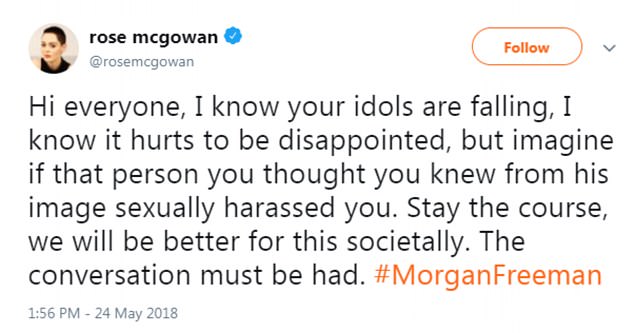 Another says that he pressed his body against hers during a group photograph after earlier spending much of a party staring at her breasts. 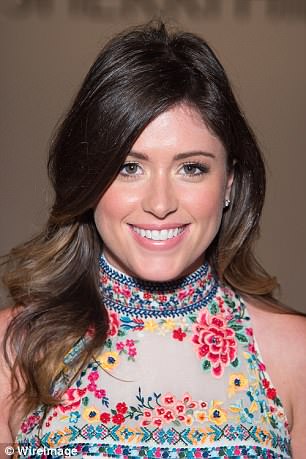 Others, including female staffers from Revelations Entertainment, his production company, alleged that he routinely made inappropriate remarks to young female interns and that he was once seen massaging one while she sat awkwardly at her desk.

Freeman, in his apology, denied intentionally hurting any of the women.

He told DailyMail.com: ‘Anyone who knows me or has worked with me knows I am not someone who would intentionally offend or knowingly make anyone feel uneasy. I apologize to anyone who felt uncomfortable or disrespected — that was never my intent.’

Rose McGowan, one of the first to speak out against Weinstein, reacted to the claims against Freeman on Twitter.

She said: ‘Hi everyone, I know your idols are falling, I know it hurts to be disappointed, but imagine if that person you thought you knew from his image sexually harassed you.

‘Stay the course, we will be better for this societally. The conversation must be had.’  McGowan added the hashtag ‘Morgan Freeman’.