Vladimir Putin has unnerved large parts of the West as he intently observed Russia’s biggest war games in years.

The Russian President watched through a pair of binoculars as his forces successfully repelled an imaginary enemy and launched a tank-led counter-offensive.

NATO officials say they are monitoring the Zapad-2017 (West-2017) event with ‘calm and confidence’,

Despite claims from Russia that the exercise is rehearsing a purely defensive scenario, many are unnerved about what they see as Moscow testing its ability to wage war against the West. 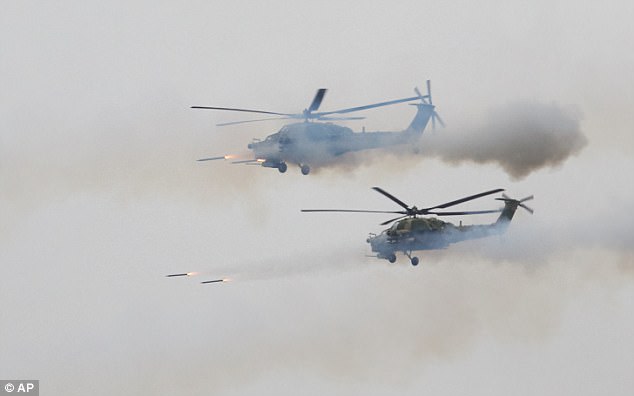 Putin, commander-in-chief of Russia’s armed forces, sat in a command centre flanked by his defence minister and the chief of his General Staff, and used binoculars to peer through a cold drizzle at the simulated conflict unfolding before his eyes.

The Russian leader has appeared at similar events in the past, sometimes donning a military uniform, and uses them to bolster his image among Russians as a robust defender of the country’s interests on the world stage.

This time, the 64-year-old president, who is widely expected to run for re-election in March, wore a dark suit and looked relaxed as the firing range in front of him, in the Leningrad region, was briefly transformed into a war zone.

The paratroopers, inserted behind the lines of their imaginary enemy, then waged war against what the defence ministry called ‘illegal armed formations.’ 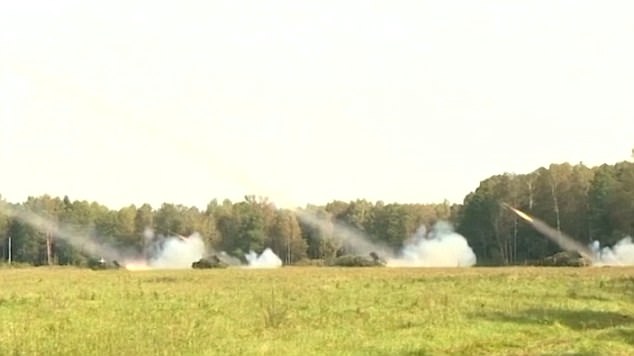 Missiles are fired into the air. Many are unnerved about what they see as Moscow testing its ability to wage war against the West 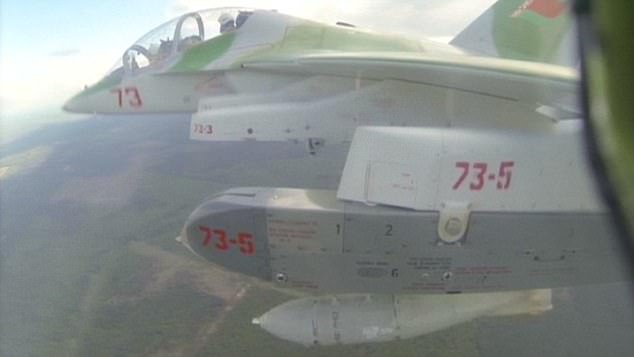 The over-arching Zapad war games, which began on Sept. 14 and run to Sept. 20, are taking place in western Russia, Russia’s exclave of Kaliningrad, and Belarus, a Russian ally which borders Ukraine as well as NATO member states Poland, Latvia and Lithuania.

Moscow says almost 13,000 Russian and Belarussian service personnel are taking part, as well as around 70 planes and helicopters. It says almost 700 pieces of military hardware are being deployed, including almost 250 tanks, 10 ships and various artillery and rocket systems.

NATO officials have said they believe the exercises involve more troops than Moscow has disclosed, however, and have complained about what they say is the lack of transparency about the exercise, an allegation Russia rejects. 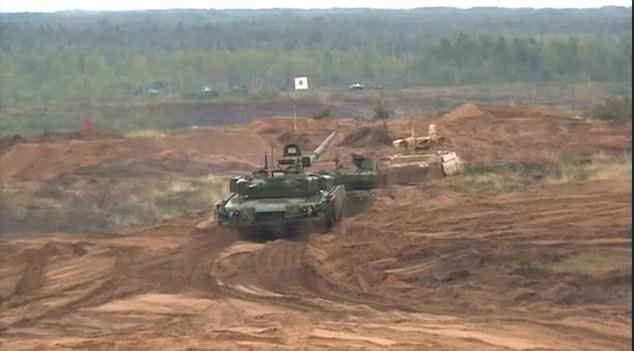 Tanks roll across the muddy terrain during the military exercise, which Russia claims is merely for defensive purposes

As part of the same drills, Russia on Monday said it had successfully test fired a ballistic missile capable of carrying a nuclear warhead, hitting a target at a firing range in Kazakhstan about 480 km (300 miles) away.

Moscow says it is the West that threatens stability in eastern Europe because NATO has put a 4,000-strong multinational force in the Baltics and Poland, while the U.S. Army has deployed 600 paratroopers to the Baltics during Zapad.

As a precaution, the United States has also temporarily taken over guardianship of the airspace of Lithuania, Latvia and Estonia, which lack capable air forces and air defence systems.