Wallet gets returned to man 30 years after he lost it

Three decades ago, former Queensland MP Rob Pyne dived off a sailing boat unaware there was a sandbank lying just below the surface of the pristine blue water.

Then 23-year-old suffered a broken spine – an injury that would confine him to a wheelchair and mean he could never walk again.

It’s a day most people would like to forget but this week he was handed a bittersweet reminder of that sunny afternoon.

A waterproof wallet he had tucked between his speedos and footy shorts when he jumped off the boat was found buried in the mudbanks of Cairns beach, holding his 1991 driver’s licence and bank cards.

The ‘one-in-a-million’ ‘find was made by Yorkey’s Knob Boat Club who were unearthing an area 15km away from the sandbank to build a boat ramp.

Being reunited with the long-lost item was a surreal moment for the now Cairns councilor, who told Daily Mail Australia it sent painful memories flooding back.

‘When I saw the wallet I thought about the opportunities lost over the years and what might have been if I hadn’t climbed out of the boat,’ he said.

‘I haven’t had a licence since then because I have limited use of my arms to drive a car, but it’s one of the things I really miss.’

Cr Pyne said he was actually not much of a ‘boatie’ back then but on that day his future father-in law invited him out for a sail near the Cairns Esplanade.

The boat was slowly moving along so he thought the water ‘must be fairly deep’.

But when the former front-rower dove off he felt a ‘big whack’. 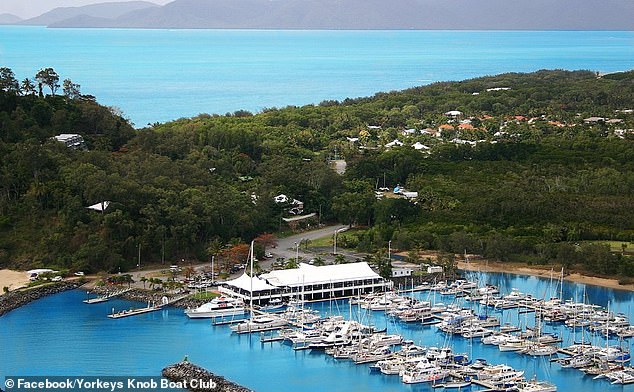 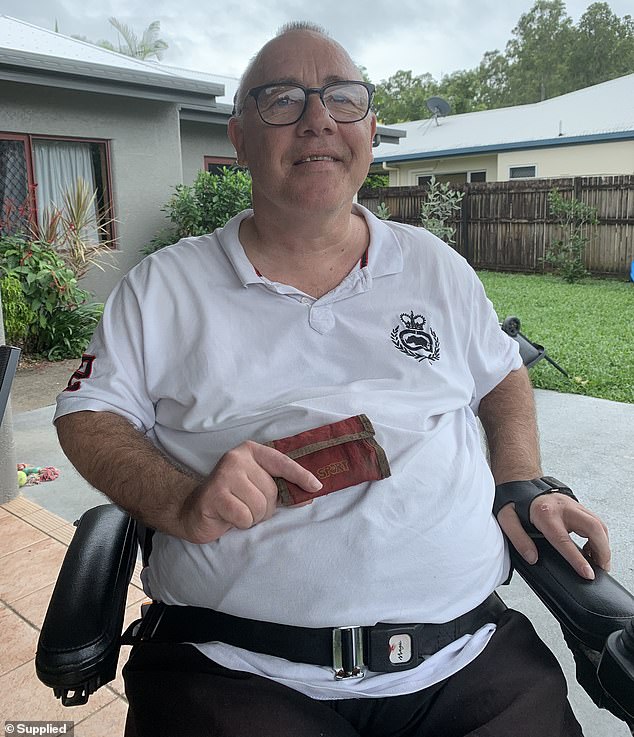 ‘I’d had whacks on the head before growing up playing rugby league but it’s not about the impact it’s just the angle,’ he said.

‘When you dive head first and have all the weight of your body behind it, it just compresses your vertebrates and one pops out and that causes your spinal cord to swell.’

In this case, both his C5 and C6 were cracked, causing irreparable damage to his spinal cord.

But despite the debilitating injury which happened just days before he was scheduled to get married, he didn’t let it stop him pursuing his dreams.

He married his sweetheart Jenny from his bed in the Princess Alexandra Hospital’s Spinal Unit and the two went on to have a child using IVF treatment.

Cr Pyne then focused his attention to education getting a history and politics degree from James Cook University in 1999 and a law degree from Queensland University of Technology in 2002. 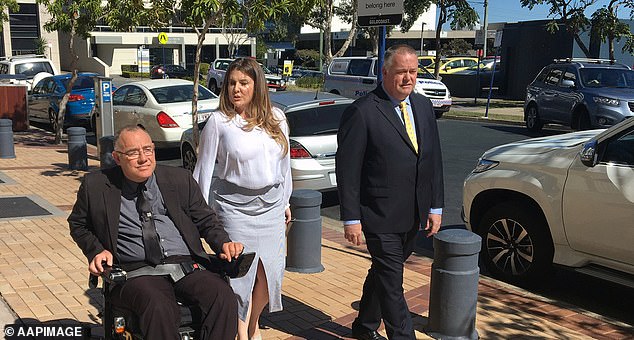 Despite the debilitating injury which happened just days before he was scheduled to get married, Cr Pyne didn’t let it stop him pursuing his dreams 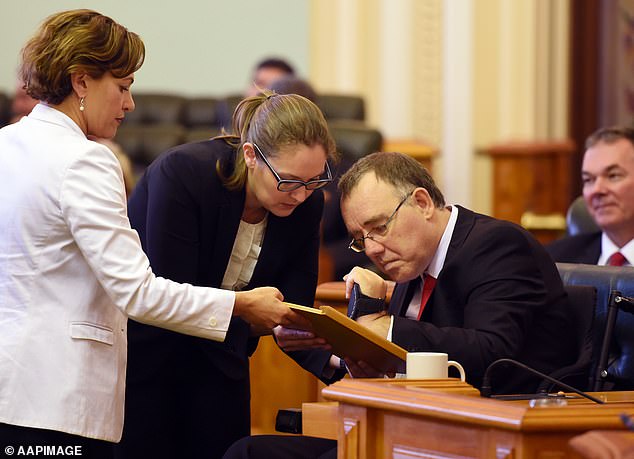 Rob Pyne (right) is sworn-in as a member of the Queensland Parliament by Deputy Premier Jackie Trad (left) at Parliament House in Brisbane, Tuesday, March 24, 2015

But his crowing achievement came when he was elected Australia’s first quadriplegic member of parliament in 2015.

He used his platform in the Queensland’s Legislative Assembly to champion environment and disability issues.

He advocated for more inclusive and accessible communities so others like him could have the same work and education opportunities as able-bodied people.

It is a message that resonated with his constituents in Cairns, as his story inspires others from across Australia and around the world.

‘Our society can be very superficial in a lot of ways,’ he said.

‘Youths idealise human physicality and that’s often in the media we consume – and it’s almost everything that’s bought or sold.

‘I’d tell people to try and get away from that superficiality and look for the real person.

‘Find out what they believe and what they think and focus more on those kinds of things.’