Melbourne has sweated through with its warmest night in September in almost 20 years in the midst of wild winds that have caused airport chaos.

The temperature stayed at 20C or above on Thursday night and Melbourne’s Tullamarine Airport was hit with severe wind gusts forcing one plane from the US to make an emergency landing.

Passengers on board had to wait for more than three hours on the tarmac at Avalon Airport on Friday morning before it eventually landed at Tullamarine.

Tullamarine Airport suffered the biggest hit with winds of up to 100km/h.

The Australian Bureau of Meteorology issued a severe weather warning for damaging winds across Victoria including the Gippsland region.

Gusts of up to 90km/h are expected to sweep through Central and Eastern Victoria late Friday night and continue into Saturday morning.

A spokesperson for Melbourne Airport told Daily Mail Australia the airport is down to a single runway due to high winds.

Flight delays are expected to continue into Friday afternoon and lead into the night.

Passengers are urged to check the airport’s website or contact the airline to see updated flight times.

The SES received more than 100 calls within the last day due to a series of fallen trees.

Victorians have been urged to store vehicles undercover and to stay away from fallen power lines.

The warm weather isn’t expected to last, dropping on Saturday with a high chance of showers. 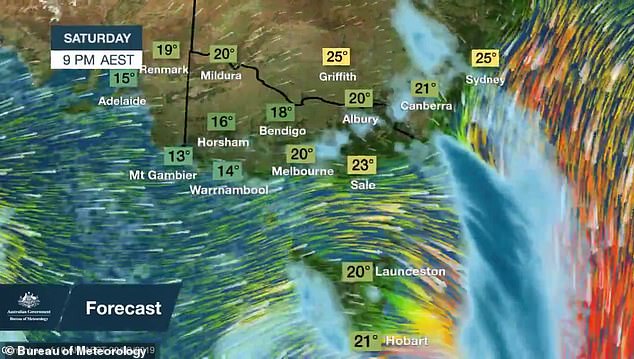