The Fourth of July holiday will be marked by celebrations of America’s birthday as well as protests against police brutality and racism, particularly in the nation’s capital where at least 20 demonstrations are scheduled for Saturday.

Black Lives Matter protesters are expected to stage a march in memory of George Floyd, the 46-year-old black man who died in the custody of Minneapolis police in late May.

The march, which was scheduled to begin at 9:30am on Saturday, will stretch from the Lincoln Memorial to the Washington Monument.

A memorial rally for Floyd will be held at the Ellipse, the large 52-acre park just south of the White House fence.

Demonstrators gathered in support of Black Lives Matter for a march in Washington, DC, on Saturday 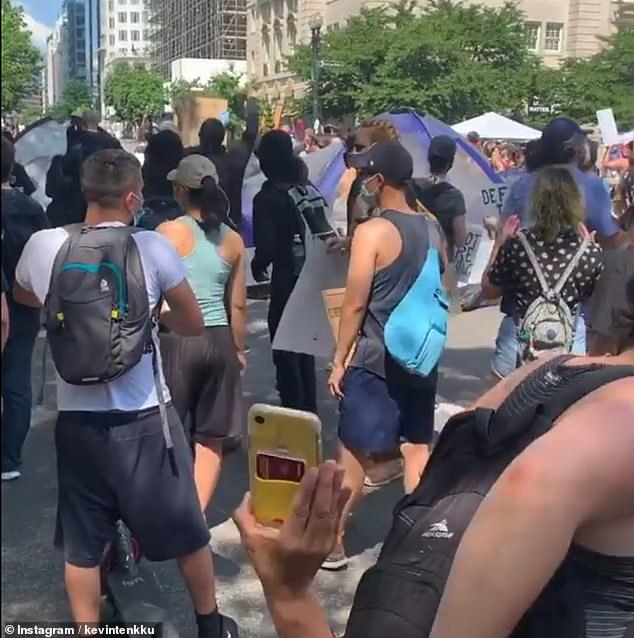 The nation’s capital is set to host at least 20 marches, sit-ins, rallies, and protests on the Fourth of July holiday 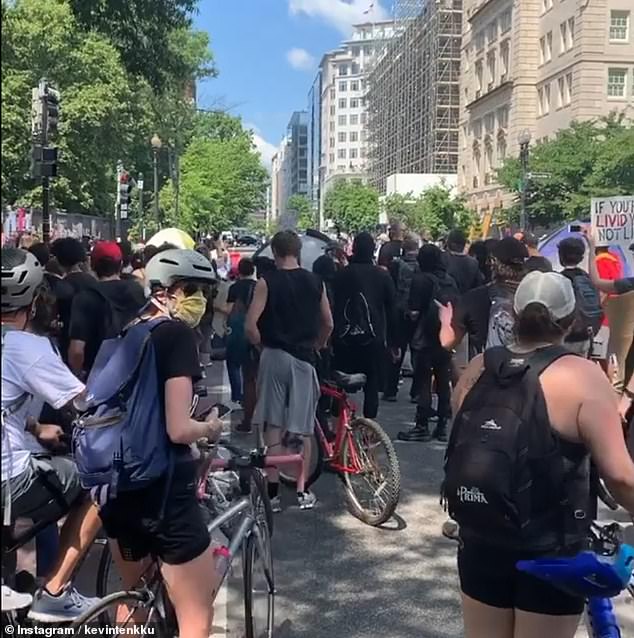 A memorial rally for George Floyd will be held at the Ellipse, the large 52-acre park just south of the White House fence

Another demonstration scheduled to begin at 10am on Saturday will be held under the banner ‘All Americans Unite.’

The march will be held in solidarity with all communities regardless of race, ethnicity, sexual orientation, or gender identity.

A separate protest titled the Million Man March On Washington is scheduled to begin at 10am on Saturday.

It will begin at the Martin Luther King Jr National Memorial and then proceed to the White House and finally the US Capitol building.

Outside the Supreme Court, a ‘peaceful sit-in for black women’ will take place from 10am on Saturday until 6pm.

An organization called the Freedom Day Foundation is planning a ‘black out march’ in which all participants are asked to wear black attire as they walk in a procession that begins at the Capitol Reflecting Pool at 12pm.

Another march which is unaffiliated with the local Black Lives Matter chapter is scheduled to start at 12:30pm at the National Museum of African American History and Culture.

Protesters will be given red, black, and green banners and will be assembled so that they form a Pan-African flag as they march in a procession toward the Washington Monument. 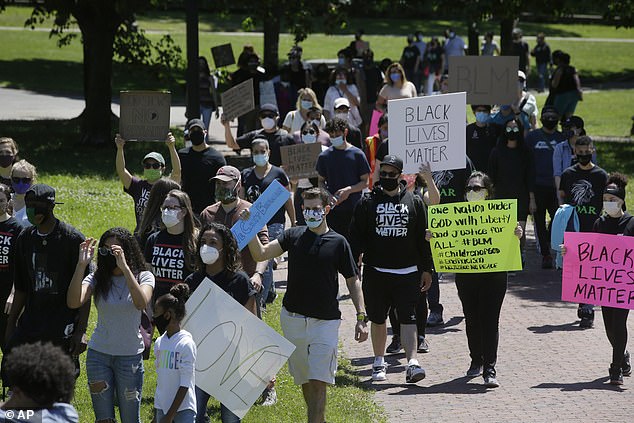 Demonstrators march onto the Boston Common in Boston on June 14. Rallies, marches, sit-ins, and other events are scheduled throughout the United States on Saturday

Several other marches and demonstrations are scheduled to take place, including one in Malcolm X Park that is scheduled to begin at 3pm.

Military veterans will march in solidarity with Black Lives Matter from McPherson Square Metro stop at 4pm to President Trump’s ‘Salute to America’ event on the South Lawn of the White House.

There will also be a military flyover and fireworks over the Mall.

Several racial injustice protests, marches, and sit-ins are also scheduled to be held throughout the country on Saturday.

In Chicago, some 2,000 people said on Facebook that they were interested in attending a rally and march in downtown.

Planners of the event said they will ask the participants to take a knee in silence for 8 minutes and 46 seconds in memory of George Floyd.

A violinist will also play the black national anthem, Lift Every Voice and Sing.

In Brooklyn, a coalition of LGBTQ activists, filmmakers, and historians are staging a ‘Confronting July 4th’ protest march beginning at around 2:30pm at Fort Greene Park.

The organizers of the march said they ‘refuse to celebrate the whitewashing of this country.

‘Instead, we will joyously and actively celebrate and honor the ancestors and activists who have fought and continue to fight tirelessly for the lives and rights of the people.’

In Boston, demonstrators plan to take part in a ‘Say Her Name’ protest and rally in support of black women.

The rally will begin in Nubian Square and continue toward Boston Common, where organizers plan a ‘celebratory’ event.

‘There will be radical joy and dancing because, as Audre Lorde wrote, “it is better to speak/remembering/we were never meant to survive”,’ the event description on Facebook reads.

‘Womxn hold up half the sky all over the world and have always been essential, yet Black womxn are too often overlooked, erased, and devalued.

A rally is scheduled to be held in Atlanta’s Centennial Olympic Park on Saturday evening. 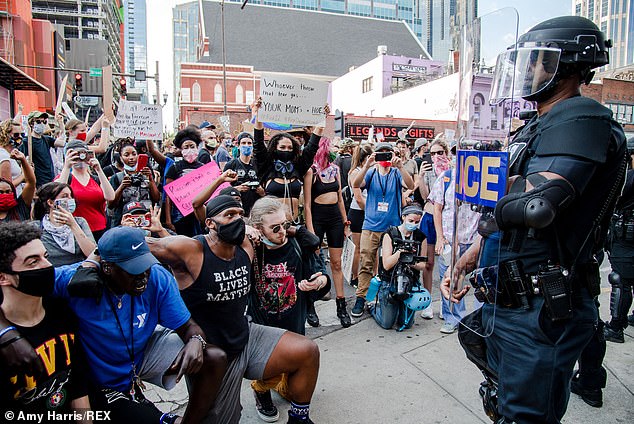 The theme of the protest is ‘rally for reparations’ and participants are urged to wear red, green, and black.

Several protests and rallies are scheduled to be held in New Jersey, including one in Maplewood in memory of Elijah McClain, the 23-year-old black man who died in police custody in August of last year.

Demonstrations are also planned for Newark, Plainfield, and Atlantic City.

All the protests – in theory – should be over before the night’s celebration on the Mall.

Public health officials have been bracing for a new spike in virus cases after this weekend’s celebrations and protests.

Some link the latest flareup to the delayed result of widespread celebrations during the Memorial Day holiday in late May, and to the reopening of some states’ economies starting around that time.

And they see this Independence Day weekend as a potential tipping point — in the worst case, a replay of the post-Memorial Day resurgence.