By Cheyenne Macdonald and James Pero For Dailymail.com

An orbiting observatory with its instruments turned toward the sun has captured the moment high-energy material erupts from the solar surface as Venus shines overhead.

The Solar Heliospheric Observatory (SOHO) operated by NASA and ESA spotted the phenomenon earlier this week and shared it on Twitter.

The event was what’s known as a coronal mass ejection, in which the sun spews plasma and magnetic field from its upper atmosphere.

Coronal mass ejections are relatively common occurrences in space weather. But, that doesn’t make them unremarkable.

These events can send billions of tons of material hurtling into space and towards our own planet, sometimes effecting satellites and communications.

The latest was discovered in the SOHO observations by scientists Karl Battams.

The observation comes just days after NASA revealed its historic mission to study the sun had delivered data from its first two encounters – amounting to a payload 50 percent larger than the space agency was expecting.

‘All of the expected science data collected through the first and second encounters is now on the ground,’ said Nickalaus Pinkine, Parker Solar Probe mission operations manager at APL in a statement at the beginning of August.

‘As we learned more about operating in this environment and these orbits, the team did a great job of increasing data downloads of the information gathered by the spacecraft’s amazing instruments.’

A boon in information was aided by a better-than-expected performance from the probe’s telecommunications system which NASA says has helped to set up more downlink opportunities.

In that extra data are unprecedented insights into our sun, including information on particles, waves, and observations of the Sun’s corona and the solar environment.

The probe, about the size of a family compact car, has traveled closer to the sun than any other man-made object, enduring some of the most brutal conditions imaginable.

Those include cosmic radiation 500 times more powerful than radiation on Earth and temperatures of 1,300°C (2,400°F). 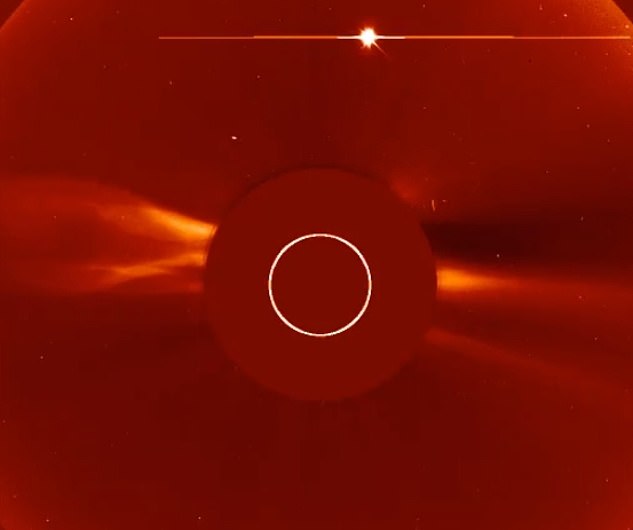 Because of the Sun’s immense gravitational force, the probe has also traveled faster than any object made by man, hurtling around the star at blistering 213,200 mph (343,000 kph) – fast enough to fly between New York and London 39 times in one hour.

Scientists hope the pioneering probe will help unlock mysteries about our sun, like why its corona – the outermost part of the Sun’s atmosphere – is 300 times hotter than the surface and how the Sun produces giant plumes of plasma called solar flares.

The closest it will ever get to the Sun will be on December 24, 2024, where it is expected to fly just 3.9 million miles (6.3 million km) away from the surface, more than seven times further than its predecessor, Helios 2, which reached only four per cent of the distance between the Sun and Earth.

Its final mission, in about five years, will send the instrument plummeting into the Sun where it will completely burn up.