A wild goose chase sparked a Detroit Tigers rally against the Los Angeles Angels on Wednesday night after a Canadian Goose escaped the pursuing Comerica Field grounds crew only to fly directly into an LED scoreboard on the façade of the Stadium’s third deck before falling two levels into the seats below.

There was a happy ending, however, as the goose was retrieved by a woman – reportedly a veterinarian – given a clean bill of health and released.

‘We’ve been informed the goose is healthy and has been released outside the ballpark,’ read a statement on the Tigers’ Twitter account, which finished with the hashtag: ‘#RallyGoose.’ 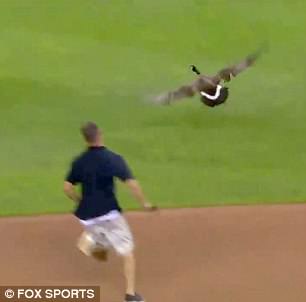 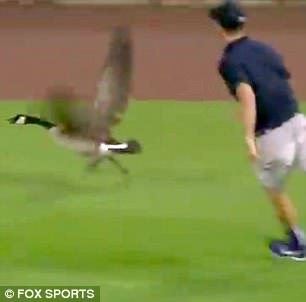 The Comerica Park grounds crew gave chase, but the low-flying bird eluded them

The Tigers’ social media account turned out to be right as the home team came back to win 6-1 after a pair of rain delays and five solid innings from the Angels’ Japanese sensation, Shohei Ohtani.

Initially the goose settled into right-center field during the second of two rain delays Wednesday night. The effort to remove it proved chaotic.

After the grounds crew set off two firecrackers and another member gave chase, the bird tried to escape, but crashed into the scoreboard and plummeted like a stone into Comerica Park’s lower bowl.

After several moments, a veterinarian who was attending the game wrapped the stunned goose in a blanket and took it to the concourse, where it was released outside the stadium and dashed into nearby bushes.

‘My wife would have had a heart attack if she saw that,’ Tigers manager Ron Gardenhire told reporters afterwards. ‘We’re glad the goose is OK. That was not fun to watch when they were chasing him around and he went into the stands; that was scary.’ 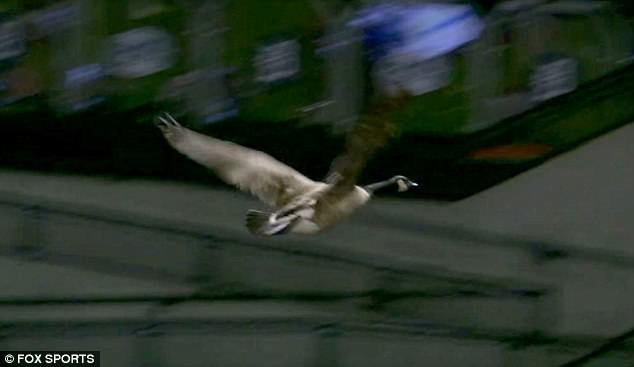 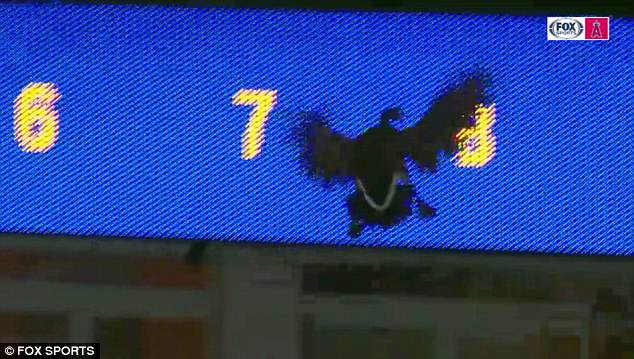 The Tigers got on the board in the sixth inning, allowing Gardenhire to quip, ‘We broke up the goose eggs, OK.’

Opposing manager Mike Scioscia, who was at the helm when the Angeles featured a scoreboard ‘Rally Monkey’ en route to a their World Series title in 2000, found the incident pretty funny.

‘They’re a beautiful animal,’ Scioscia said, before poking fun at his expanding waistline. ‘Looked like me trying to get off the ground with the wings for a while. He had about six inches of altitude, but he finally got up.’

Even the Tigers’ next opponent, the Toronto Blue Jays, had some fun with the incident on Wednesday night.

‘We sent in our Goose to scout Friday’s competition,’ read a tweet from the team’s social media account.