London has been named as the car crime hotspot of the UK with Lambeth having the highest number of thefts, new research has revealed.

Nine of the top ten locations for car theft are in the capital including the exclusive borough of Kensington and Chelsea as well as Ealing and Wandsworth, according to data from Co-Op Insurance.

Preston was found to be the only Northern borough within the top 20, sitting at number 13.

Meanwhile, Moray in Scotland was found to have the least frequency of vehicle theft claims in four years.

Lambeth has the highest number of thefts, followed by Kensington & Chelsea, Co-Op has said

In England, Mid Devon had the lowest record of motor thefts and for Wales, Denbighshire had the fewest reported.

The data looked at 362 area postcodes across England, Scotland and Wales that had the highest car theft rates since 2016.

When it comes to which makes and models of cars are most likely to be targeted, the study reveals that it is smaller, lower-price point vehicles that are favoured by thieves.

This is likely because they don’t have the difficult-to-infiltrate security systems that more expensive models tend to have.

The car found to be stolen the most, by volume of total claims over the four years, is the Ford Fiesta.

This shouldn’t come as a huge surprise, given it has been the best-selling car in Britain for over a decade.

It was followed by the Ford Focus, the Vauxhall Corsa and the Vauxhall Astra – again, all volume-selling vehicles in the UK.

More expensive models also featured near the top, including Land Rover’s Range Rover Evoque at number six and the Audi A3 at eight.

Paul Evans, head of motor insurance at Co-op Insurance, said: ‘Having your car stolen is one of the most distressing experiences a person can endure and sadly, it is still something that blights everyday life, particularly in our cities.

‘Our claims data shows that car crime rates in London have remained continuously high but it’s interesting to see that places like Preston and Stockport are also emerging hotspots in the North.

‘People with smaller and perhaps less expensive cars need to be aware that these motor vehicles are hot property for car thieves.’

To help customers understand what car crime levels are like in their area, Co-Op Insurance has launched its Park Smart interactive tool.

Users can search for vehicle crime hotspots by postcode or location to quickly identify a safe street, with results showing how many reports of vehicle thefts, thefts from a vehicle and vandalism there have been in the last six months.

Areas are colour coded red, orange or yellow to make it easy to spot areas of concern. 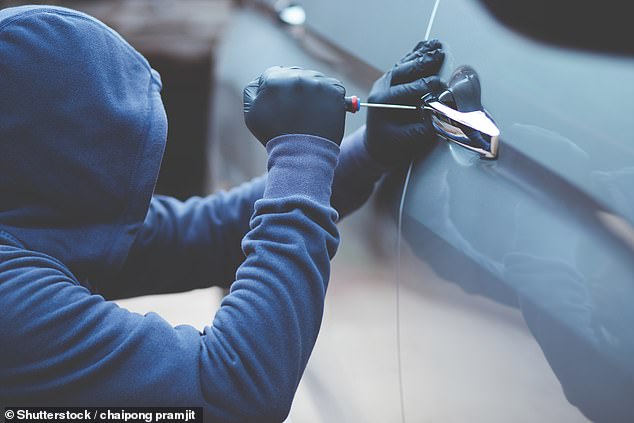 Smaller, lower-price point vehicles that are favoured by thieves, new research has revealed

Postcodes with the most thefts

Postcodes with the fewest thefts

1. Think before you park: If your car is not at home, park it in a well-lit area, near to people and other cars and somewhere where it can easily be seen, preferably monitored by CCTV or a security patrol.

2. Wheels at an angle: When parking on the street, make sure your car wheels are facing the kerb (unless parking up hill on a hill). This means that anyone trying to speed off in your car will have to release the steering wheel lock first. It also helps eliminate the chance of a thief towing or pushing your car away to a quieter spot.

3. Invest in deterrents: Something as simple as a visible steering lock can really put a car thief off. If you don’t have one fitted, consider adding a car alarm, immobiliser, tracking device or dash cam.

4. Doors to manual: You might think that by clicking your key fob, your car has automatically been locked but increasingly inexpensive remote control jamming technology can be purchased on line which blocks signals to your car meaning you are actually leaving it completely unlocked and not alarmed.

The only way to ensure it has worked is by manually checking the doors and boot before you walk away.

5. Avoid temptation: Never leave enticing objects such as bags, clothes, sat navs, designer sunglasses, loose change or mobile phones on display. This could prompt an opportunistic thief to smash a window and take your belongings. Ensure your car looks empty and free from expensive items.

6. Switch off your engine: Don’t leave your car running whilst you nip off to run an errand – you’re making it too easy for car thieves to take advantage of an empty driving seat.

7. Petrol stations: If no one is sitting in your car, lock it as you go to pay for your petrol otherwise this gives a thief an ideal opportunity to strike.

8. Be surroundings aware: To avoid being a victim of carjacking, when in slow moving traffic or a traffic jam lock your windows and doors, place valuables out of sight and remain alert, especially if travelling at night or driving a convertible.