Wearing a face mask does not instill a false sense of security against coronavirus, scientists have concluded.

The World Health Organization warned in April that masks may make people think they didn’t need to wash their hands as much or stick to other disease-fighting measures.

However, researchers led by University of Cambridge have found no evidence this ‘risk compensation’ behaviour occurs.

They looked at evidence from 22 studies on wearing masks to control the spread of respiratory viruses.

In some cases, groups allocated to wear masks washed their hands more often than those who did not.

Scientists have debunked the theory that wearing a face mask against the coronavirus instills a ‘false sense of security’. Pictured, shoppers wearing face masks on Oxford Street, London 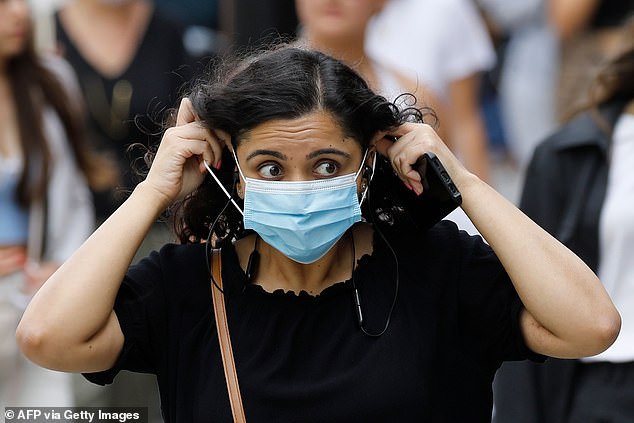 The World Health Organisation warned masks would make people think they didn’t need to use other essential measures. Pictured, a shopped on Oxford Street

Officials made it mandatory for people to wear face coverings in shops in England last Friday and public transport since June 15.

The Department of Health says that coverings are ‘strongly encouraged’ in other enclosed spaces not covered by the law.

Some experts believe wearing a face mask will leave people thinking they do not need to worry about catching the coronavirus at all.

Early in the pandemic, the WHO warned masks can ‘create a false sense of security that can lead to neglecting other essential measures such as hand hygiene practices’.

It’s too early for their to be reliable data on how well they prevent infection with COVID-19, but the study found the thinner, cheaper masks do work in flu outbreaks.

So what about cloth coverings? Although good quality evidence is lacking, some data suggest that cloth masks may be only marginally (15 per cent) less effective than surgical masks in blocking emission of particles, said Babak Javid, principal investigator at Cambridge University Hospitals wrote in the BMJ on April 9.

He pointed to a study led by Public Health England in 2013 which found wearing some kind of material over the face was fivefold more effective than not wearing masks for preventing a flu pandemic.

The study suggested that a homemade mask ‘should only be considered as a last resort to prevent droplet transmission from infected individuals, but it would be better than no protection’.

This behaviour has been described as ‘risk compensation’ or ‘moral licensing’ — and people do it for all kinds of reasons.

For example, a cyclist may wear a helmet but only so they can cycle at a riskier, faster speed, rather than to protect them at their usual pace.

Professor Dame Theresa Marteau and colleagues at Cambridge wanted to see if the same applied to people’s attitudes against catching the coronavirus while wearing a face mask.

The paper, published in the journal BMJ Analysis, found 22 systematic reviews which have assessed the effect of wearing a mask on transmission of respiratory virus infections.

However, none looked specifically at Covid-19.

Of the six studies that also looked at whether people still washed their hands, ‘wearing masks did not reduce the frequency of hand washing or hand sanitising’.

The studies all used self reporting, which is not the most reliable measurement used in science. And none were designed specifically to look at risk compensation.

The researchers found three studies, none of which had been peer reviewed, that assessed the effect of mask wearing on the behaviour of others around them.

All showed that people moved away from those wearing a mask, which in theory would be a move to protect them from catching the virus.

The paper said that the idea of risk compensation used as an argument to discourage the wearing of face masks was ‘unfounded’.

Experts may say that an intervention that causes people to relax their other control measures is worse than promoting it.

‘There is, however, no compelling evidence that such risk compensation exists at a population level,’ Professor Marteau and colleagues wrote.

Instead, wearing a face mask could do the opposite and drive people to uptake other associated behaviours, like handwashing, because it acts as a cue to remind people of the risk of the coronavirus.

The team backed their claims that risk compensation does not exist by looking at other realms of health, finding weak evidence.

For example, being vaccinated against HPV, a group of viruses passed through sex, was not found to lead to riskier sexual activity.

The researchers concluded: ‘Evidence is growing that wearing face covering reduces the spread of SARS-CoV-2, and the limited evidence available does not support concerns that their use adversely affects hand hygiene.

‘In 2016, Pless (Barry Pless, a scientist at McGill University in Canada) argued that risk compensation theory “is a dead horse that no longer needs to be beaten”.

‘We would add that this dead horse now needs burying to try to prevent the continued threat it poses through slowing the adoption of effective public health interventions.’

But other experts disagreed and pointed out that evidence in this area was still limited.

Susan Michie, a health psychologist at University College London, told The Telegraph: ‘The authors rightly point to evidence that “risk compensation” is not a universal phenomenon but, as they themselves recognise, there may be contexts in which it can occur.

‘So the idea of “burying it” is as potentially dangerous as assuming that it will occur.’

Robert Dingwall, a social scientist at Nottingham Trent University, said: ‘The authors do us all a service by bringing together a body of work in a convenient form.

‘Merely piling up fragile evidence does not, though, necessarily make it any stronger.’