Cecil Lockhart of Welch, West Virginia, 95 (pictured), became the oldest organ donor ever in the U.S. after he passed away on May 4 and his liver was transplanted into a woman in her 60s

A 95-year-old man has made history as the oldest organ donor ever in the U.S.

Cecil Lockhart of Welch, West Virginia, a great-grandfather of six, passed away on May 4 of natural causes.

He was a registered organ donor and his liver was donated to woman in her 60s who is ‘doing well,’ according to a press release from the Center for Organ Recovery & Education (CORE), which coordinated the transplant.

The previous record for oldest organ donor was set by a 93-year-old.

Lockhart’s family said he was inspired to become an organ donor more than a decade ago after his son, Stanley, died in 2010.

At least 75 people received tissue from Stanley through donation, and two had their sight restored when they were given his corneas.

‘He was a generous person when he was alive, and we are filled with pride and hope knowing that, even after a long, happy life, he is able to continue that legacy of generosity,’ Lockhart’s daughter, Sharon White, said in a statement.

‘When my brother was a donor after he passed away a few years ago, it helped my dad to heal. And today, knowing his life is continuing through others really is helping us through our grief too.’

Lockhart was born in Short Pole, West Virginia – a tiny town about 105 miles south of Charleston – in 1926, the sixth of seven children.

According to CORE, he worked a coal miner for more than 50 years and served in the U.S. Army during World War II as a corporal.

‘Just as he fought for our country’s freedom 75 years ago in World War II, he would be proud to know that he’s fighting for someone else today, as an organ donor,’ his son-in-law, Bill Davis, said.

At Lockhart’s funeral, the family asked that all in attendance register to become organ donors in his memory, according to Davis.

According to the United Network for Organ Sharing (UNOS), since 1988, more than 30 percent of U.S. deceased organ donors have been aged 50 or above. 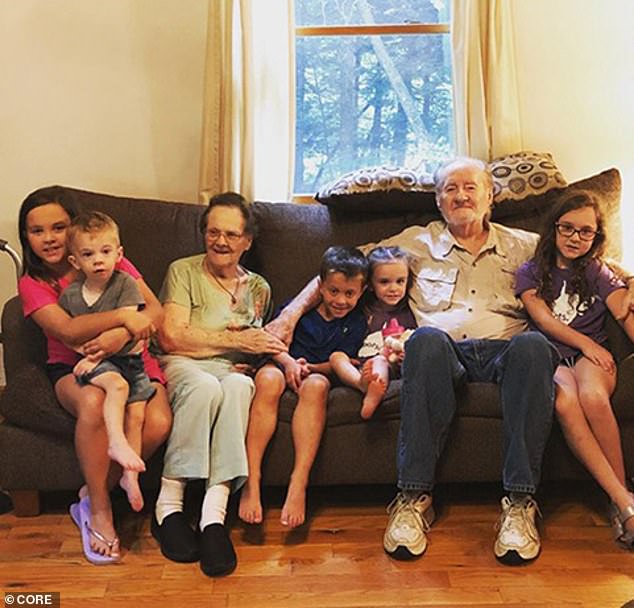 Lockhart was inspired to be an organ donor after his son, Stanley, died and had his tissues transported into 75 people and two people had their sight restored. Pictured: Lockhart (second from right) with his wife, Helen (third from left) with their grandchildren and great-grandchildren

WHAT IS THE LIVER DONOR PROCESS?

1. Make sure the donor’s and recipient’s blood are compatible

2. HLA (HumanLeukocyte Antigens) testing to make sure the tissues between the donor and recipient are compatible

3. The donor and recipient are not required to be the same age, sex or race

4. Screen the donor for any health treats, including hepatitis viruses or HIV

5. After the donor is declared brain-dead, the liver is removed and placed in clean fluid, and stored in a refrigerator

6. The liver is transplanted into the recipient within 24 hours of recovery

Officials find that more and more people who register to be organ donors upon their death are middle-aged or senior citizens.

In 2021, 39 percent of donors have been age 50 or older, an eight percent increase from two decades ago, UNOS data show.

‘Too often, people mistakenly believe there is an age limit associated with being an organ donor,’ UNOS Chief Medical Officer David Klassen said in a statement.

‘The truth is, no one is ever too old or too young to give the gift of life. Every potential donor is evaluated on a case-by-case basis at the time of their death to determine which organs and tissue are suitable for donation. Cecil’s generous and historic gift is a perfect example of that.’

Recent research has suggested that some parts of the body age faster than others, meaning our organs can outlive us.

One study from the University of Liverpool in the UK found that the success rate of transplanted hearts and pancreases worsened after the donors were above age 40 and for livers between ages 30 and 50.

Dr Michael Snyder, a professor of genetics at Stanford University, told the BBC that our organs are like car parts.

‘Over time, the whole functioning of a car declines, but some parts wear out faster than others,’ he said.

There are currently more than 107,000 patients are on the national transplant waiting list with a new person added every 10 minutes, according to UNOS.