What a return for the play of the century! PATRICK MARMION reviews Jerusalem

Verdict: Turn of the century

Thirteen years since he first cleaned up at awards ceremonies on both sides of the Atlantic, Mark Rylance is back as rural reprobate Johnny ‘Rooster’ Byron in Jez Butterworth’s theatrical masterpiece, Jerusalem. And what a blast it remains.

Now 62, Rylance can still do a handstand in a horse trough and follow that by swallowing a raw egg, milk and vodka to cure his character’s morning hangover.

Some hail Butterworth’s Wiltshire-set pastoral comedy as the play of the century, but Rylance’s performance as the ne’er-do-well hero is surely also the turn of the century. It’s a Harley-Davidson of a role, throbbing with disreputable joy. 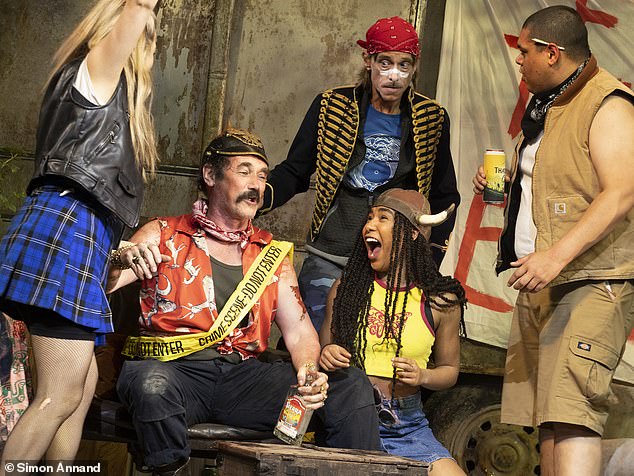 Some hail Butterworth’s Wiltshire-set pastoral comedy as the play of the century, but Rylance’s performance as the ne’er-do-well hero (pictured) is surely also the turn of the century

Living in a rusty chrome caravan in a leafy glade filled with mouldy sofas, Rylance’s Rooster is a flamboyant bum who elaborates his personal legend with tall stories told from a knackered Mastermind-style chair while smoking spliffs.

Best seat in the house

The play opens with him being served an eviction order by Kennet and Avon Council after locals have signed a petition to have him ousted.

But before he goes, friends and enemies come to buy drugs, pay homage and get even, on their way to the St George’s Day fair in the fictional village of Flintlock.

Rylance’s tattooed Lord of Misrule is a creation of shamanic legend.

Most marvellously, the story releases something miraculous in Rylance, who transforms this low-life fabulist into a champion of English libertarianism.

Mackenzie Crook fizzes, too, as his aging, emaciated, pusillanimous sidekick, Ginger, who tries to bring him to reason.

But one of the sweetest turns in Ian Rickson’s sometimes melancholy production is from Alan David as the elderly Professor who’s a repository of Celtic folklore.

Running in three parts in as many hours, with a raucous cast of 16, the evening is not a second too long.

And no matter how strong the rivers of four-letter words, they bubble with rustic enchantment.

Rooster and the Professor raise chipped mugs of morning tea laced with whisky to toast ‘St George and all the lost gods of England’ — and that’s what Butterworth’s play does, too.

The tragedy is that it’s almost completely sold out.

We must pray that it will be extended and recorded for posterity. 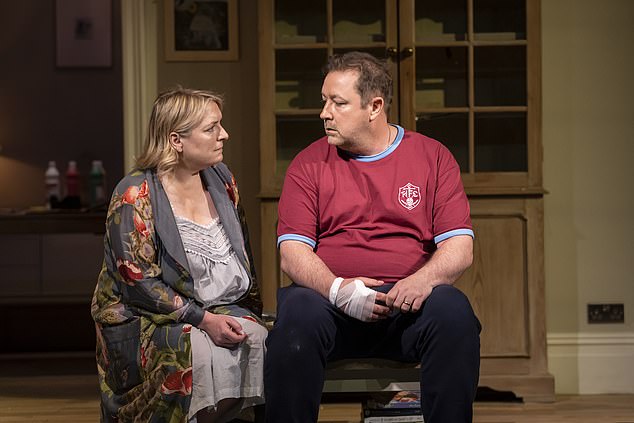 There are many home truths in David Elridge’s new play, Middle, about a 16-year-old marriage

Couples beware: there are many home truths in David Eldridge’s new play, Middle, about a husband and wife in the doldrums of a 16-year-old marriage.

It’s a follow-up to his 2017 play, Beginning, about an unlikely relationship that starts while clearing up at the end of a house party.

Gary comes downstairs at 4.20am to find his wife, Maggie, warming milk and telling him she doesn’t love him any more.

An hour-and-40-minute deposition follows as he offers to liven up their sex life, work less and perfect his pork crackling. She wants to lose weight, read books and ‘take a period of reflection’.

A potentially depressing evening is leavened with wry humour (mostly Gary’s), and I was glad to spend quality time with two people trying to rediscover love.

Polly Findlay’s forensic production is warmly indulgent of both parties. Claire Rushbrook is guilt-stricken yet tender as Maggie, while Daniel Ryan makes a very cuddly Gary, who is desperate not to be caught weeping.

It does, though, feel part of a  trilogy and left me craving a final part that’ll presumably be called End.

Much ado about love in an enchanted garden

Much Ado About Nothing (Shakespeare’s Globe, London)

Verdict: Much better ado about Shakespeare

You could be forgiven for wondering whether those in charge at Shakespeare’s Globe had fallen out of love with the Bard.

Many of the theatre’s productions in the past year have seemed more concerned with rueing Shakespeare’s political incorrectness than taking pleasure in his drama.

Happily, that’s not true of Lucy Bailey’s joyous new production of Much Ado About Nothing — the romantic comedy about waspish sworn enemies Beatrice and Benedick. 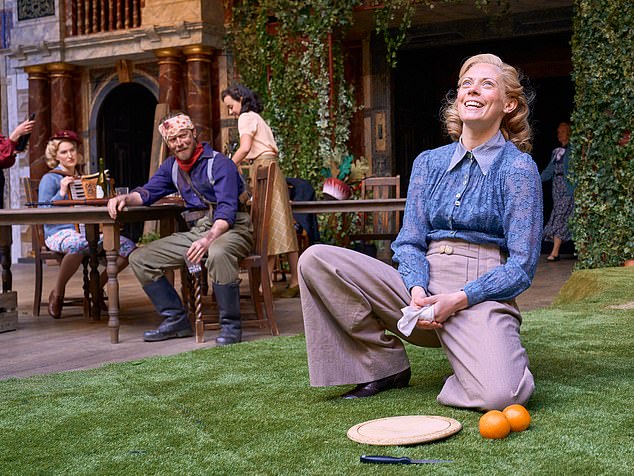 Transposed from Renaissance Sicily to Northern Italy in the aftermath of World War II, the setting still chimes with Beatrice’s demand that Benedick should redeem her family’s honour after her cousin, Hero, is jilted at the altar.

The actors, too, are affably interactive with the audience, creating an intimacy and solidarity that wins gasps at their tribulations, as well as oohs and aahs at their triumphs. 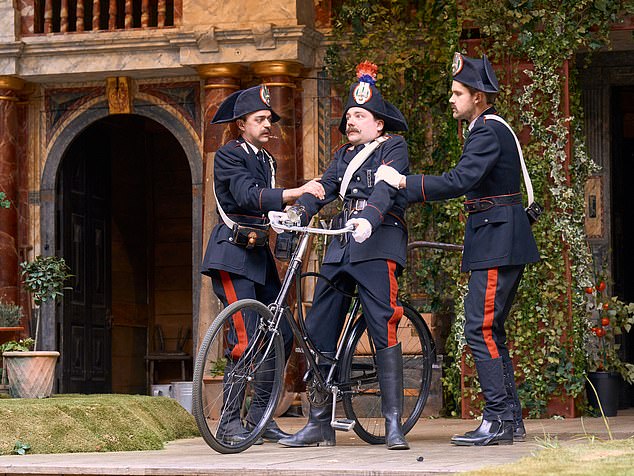 She is fierce and self-possessed, yet whimsical and wary.

He, on the other hand, returning from war, is weary and deadpan. Yet he’s also rejuvenated by the prospect of finding love where he least expects it.

A great innovation of Bailey’s production is turning Beatrice’s family into a matriarchy, with a mother and aunt (Katy Stephens and Joanne Howarth) replacing Hero’s father and uncle. 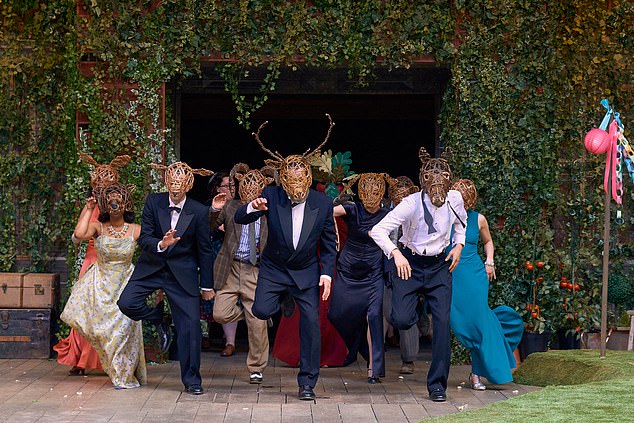 This creates a terrific sense of sisterhood and feeds the play’s sex-war theme.

George Fouracres as an Inspector Clouseau-ish clown heading up a team of Keystone Carabinieri has its own dotty logic, too. But most remarkable is the forgiveness Nadi Kemp-Sayfi’s sunny Hero finds for Patrick Osborne as her naive accuser, Claudio.

Result: I’ve seldom seen so many smiling faces turned on the stage in this boisterous venue.

The rise and fallouts of the Osmond hit machine

The Osmonds: A New Musical (touring)

Verdict: You loved them for a reason

The Osmond brothers were the original boy band, selling 100 million records in their 1970s heyday.

Now Jay Osmond has written (with Shaun Kerrison, who directs) a feel-good musical, which tells their story from barber shop quartet to global hit machine.

There’s a lot of ground to cover, but the writers tell the story with panache as we meet the family first as children, through mega-stardom and up to 1980, when financial disaster strikes. 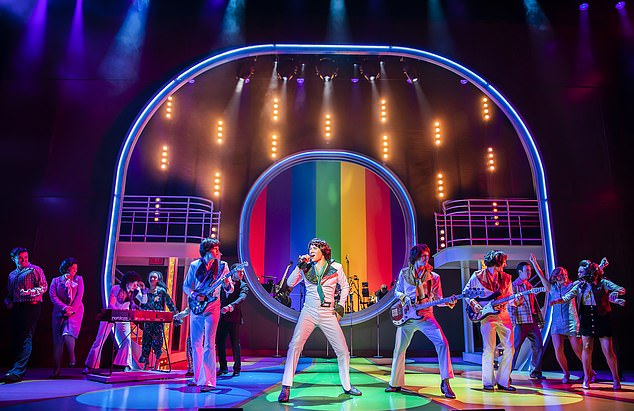 Jay (Alex Lodge, superb) tells the story, moving seamlessly between narrator and participant on Lucy Osborne’s simple set, which is framed like a TV studio.

As Donny (Joseph Peacock) becomes the focus of the group and his older brothers are relegated to being his backing band, tensions start to grow.

But as a chronicler of their life, the real Jay Osmond pulls his punches. Their father, George (Charlie Allen), was clearly a martinet — getting his sons up at 4.30am to rehearse — yet it goes without comment. 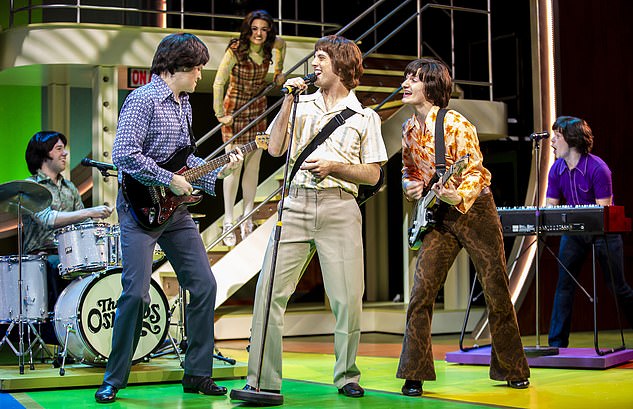 He also doesn’t address any temptations the religious brothers may have felt about teenage girls throwing themselves at them.

Even the revealing scene where the family learn, in 1980, that a bad deal brokered by Alan (Jamie Chatterton) and Merrill (Ryan Anderson) has lost them their entire $80 million fortune ends with the trite ‘faith, family, career, in that order’.

Surely even Mormons would curse a little about facing bankruptcy?

But who wants gritty realism when the performances are uniformly terrific, Bill Deamer’s dance numbers are sassy and the on-stage band are bang on the beat?