What is Gener8? Web browser founder who wowed on Dragons’ Den

Internet giants such as Google make billions from tracking our online activities and selling data to third parties but we get little in return, according to one entrepreneur, who wowed Dragons’ Den with his plan to change that.

The founder of web browser Gener8, Sam Jones, wants to put the power of data ownership back into the consumer’s hands – effectively giving them the ability to turn themselves into an affiliate – and he says this can better reward publishers too.

Gener8 lets internet users choose whether to share their data and be rewarded if they do so – and it claims it can enable publishers to monetise users who would otherwise be using ad-blockers.

The internet browser lets users choose between privacy mode and rewards mode, where they earn points each time their data is used that Gener8 says can then be exchanged for products, vouchers or donations to charity.

While there are concerns that a web browser such as Gener8 could harm publishers’ ability to earn money from advertising, its website says that it wants to work with publishers to monetise an audience who would otherwise be blocking ads and better understand users.

Its focus is taking on big tech, such as Google and Facebook, and can stop the latter tracking people across the internet even when logged out.

Sam says: ‘A lucrative industry has been built from exploiting our data – it’s an open secret that advertisers are taking advantage of us online.

‘Everything we do on the internet is being tracked. Companies are collecting our data and selling it to the highest bidder, but we receive nothing in return.’

He pitched his Gener8 business on Dragons’ Den, which aired last month, asking the Dragons to invest £60,000 in the free to use web browser that lets people take back control and earn from their own online data.

In exchange he was willing to give away 10 per cent equity in the business.

The Dragons saw the potential of Gener8 immediately and were also blown away by the polished pitch that Sam delivered.

Four Dragons – except for Sara Davies, who bowed out saying she lacked expertise in the tech sector – fought it out in Den offering all the money Sam had asked for, while Suleyman sweetened the deal with free office space in addition to the investment.

After thinking it over in traditional fashion at the back of the room, Sam opted to take investment from Dragons Suleyman and Jones, who agreed to pair up.

How does Gener8 work?

Gener8 can be used on both Windows and MacOS, but you have to login to use your account and earn points. It’s not yet available to use on phones or tablets.

Sam says: ‘That’s coming soon in the fourth quarter of this year as it’s not ready yet.

‘Currently it can only be used on laptops, PCs and desktops.’

It lets people choose to keep their data private or earn from it themselves whilst browsing online.

By selecting ‘Privacy Mode’ the user can stop companies from tracking them, or the ‘Rewards Mode’ means that person can share their data with Gener8 to monetise it for them. 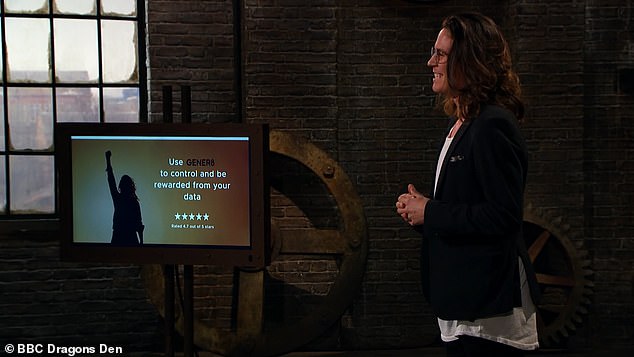 Sam Jones, founder of Gener8 says that a lucrative industry has been built from exploiting our data – it’s an open secret that advertisers are taking advantage of us online

While browsing the internet people will get many different types of adverts – some of which aren’t always relevant.

But Gener8 allows people to create their own profile in the Rewards Mode and select their interests. This will result in them receiving targeted adverts based on these interests.

How do you earn points?

Gener8 says this will increase in the future. The points can then be redeemed for products, vouchers, or donations to charity in Gener8’s marketplace.

Sam says: ‘Points vary on how much you have completed your profile.

‘Once a person has completed their preferences, which takes 30 seconds to do then they earn points at the ‘fastest’ speed.

‘But if you have only completed 50 per cent of your preferences then you earn points at half speed.’

For those that have completed profiles points are earned based on many different factors.

There’s a cap of 15 points awarded per day, but users can earn an additional 10 points for every friend that they invite.

It’s possible to stop Google from tracking your online movements but opting out of it can be a complicated process, according to Sam.

Sam explains: ‘If you’d like to stop Google from tracking you online, it takes around 17 clicks to do so.

‘In fact, its privacy settings are so confusing that unsealed court documents show Google’s own engineers have said “it feels like it is designed to make things possible, yet difficult enough that people won’t figure it out.”‘

A 2019 study by The New York Times also found that Facebook’s privacy policy is harder to read than Stephen Hawking’s book, ‘A Brief History of Time’.

Sam says: ‘Once you realise the most popular browser in the world is also the largest advertising company out there, it all starts to add up.

‘But we believe in a different future at Gener8 and have re-invented the browser with transparency and people at the heart of it.

‘We give everyone a simple choice of keeping their data private or earning from it – the way it should be.’

Google and Facebook’s immense power has led to clashes with publishers, who feel they are harming their businesses and failing to share advertising revenue from content fairly.

MailOnline/DailyMail.com is suing Google in the US for alleged anti-competitive behavior over its ability to exploit a dominance in the ad tech industry to harm rivals and manipulate ad auctions and news search results in a way that punishes online publishers.

The anti-trust lawsuit against Google was filed in the US District Court in New York by Associated Newspapers Ltd. and Mail Media Inc, the parent company of This is Money and MailOnline.

The lawsuit accuses Google of using its market power dominance to increase profits for itself by engaging in bid-rigging and search bias that harms publishers and advertising rivals. 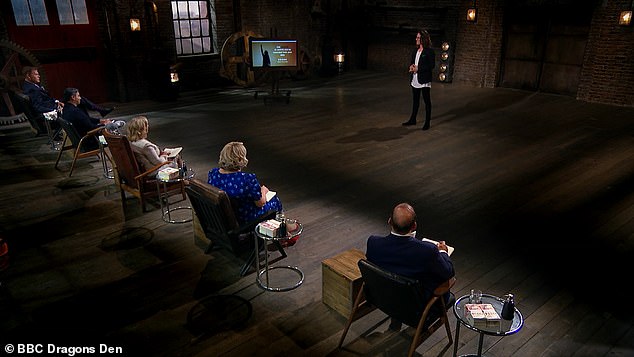 Deborah Meaden and Tej Lalvani both offered Sam exactly what he’d asked for; matching the proposal from Peter Jones. Touker Suleyman sweetened the deal by offering free office space in addition to the money

Using the Gener8 browser is not the only way in which people can search online privately.

There are also search engines that offer private surfing like DuckDuckGo and Tor to name but just a few.

But Sam maintains Gener8 is different because of its rewards system. He explains: ‘When I look at the industry there are companies like DuckDuckGo which gives total privacy and Google that exploit and track your data. And if you want to stop Google, it takes 17 clicks to opt out.

‘The difference between us and the likes of DuckDuckGo is that we’re not a search engine – we’re actually a browser and as soon as you create your profile you get privacy or rewards as an option and this is what no one else is doing.’

There is another US based competitor, Brave, that has a similar model. However, Brave Rewards offers users cryptocurrency instead of other incentives like vouchers and points.

Sam is sceptical of this model but pointed out in Dragons’ Den that it’s valued at approximately $135million (£97million) with around six million users.

He adds: ‘Our focus is on giving people real rewards and crypto is a bit too niche and too hard for the average person to understand.’

Both Gener8 and Brave feature in upcoming book Never Go Broke by This is Money assistant editor Lee Boyce.

Since the Gener8 pitch aired on Dragon’s Den more than 590,000 people visited the website, over 130,000 new users downloaded the browser and more than 37,000 people used the Gener8 Sentinel tool to see whether their data has been breached.

With its rise in popularity it could soon come onto the radar of some major corporates who may feel threatened. When asked whether giants like Google could take them on Sam appears unfazed. ‘We’re David vs. Goliath in the industry.

‘We are a company on the side of the people. We built this amazing technology to empower people and give them control.

‘We’ll wait to see what comes – we know we’re fighting the good fight for people and for users to empower them.

‘We have yet to see what big tech make of it. We have historically worked quite closely with Google though and they have given us support.

‘But on the whole it’s fair to say we are ruffling feathers as we’re empowering people to control their data and helping them make money from it.’

What rewards can you earn?

Gener8 says that so far it has distributed over £300,000 in rewards (vouchers, products and charity donations) through its marketplace.

The browser can be used globally but that users outside of the UK will, for now, have fewer choices when it comes to rewards.

Sam says: ‘Our real focus is on the UK and we want to service this market first before going too big too soon.’

The average person earns between £5 and £25 in rewards per month through using the Gener8 browser. But it isn’t a cash-based system. People receive points whenever they see an advert or any time their data is used.

At the time of writing exclusive offers include a free gift plus 15 per cent off Lab Series for Men products, 50 per cent off Adidas headphones and 50 per cent of Friday Night Gin Club, to name but a few.

These can all be redeemed in exchange for a certain number of Gener8 points earned.