Louis Theroux is incognito, sitting in a Hollywood coffee shop and tapping away on his laptop. No one spares him a second glance, unaware they’re seated next to one of Britain’s most successful documentary film-makers – the man who came close to, but didn’t, expose paedophile Jimmy Savile and who dug scarily deep into the murky world of Scientology.

And this is how Theroux, 47, likes it. In a quarter of a century he’s made films for the BBC on subjects as diverse as Neil and Christine Hamilton, neo-Nazis, white supremacists, plastic surgery junkies and Las Vegas high rollers. Theroux has found himself in the firing line more than once – both literally and metaphorically. ‘I’m drawn to the dark side, the strange,’ he says. ‘It doesn’t scare me. I’m intrigued by it.’

In a quarter of a century Louis Theroux made films for the BBC on subjects as diverse as Neil and Christine Hamilton, neo-Nazis, white supremacists and plastic surgery junkies

Theroux has been attacked by hate mobs and unwittingly found himself the subject of lurid tabloid headlines when Tory MP Hamilton and his wife were arrested for alleged sexual assault as he filmed them (they were later fully exonerated).

His biggest regret is not exposing Jimmy Savile as a predatory paedophile. It was, he says, ‘the greatest disappointment of my life’. The pair met in 2000 for the documentary When Louis met… Jimmy and became friends. Savile famously invited Theroux to stay at his home while answering questions about his sexuality with sickening jokes: ‘I’m feared in every girls’ school in the land,’ he quipped in response to one of Theroux’s questions. 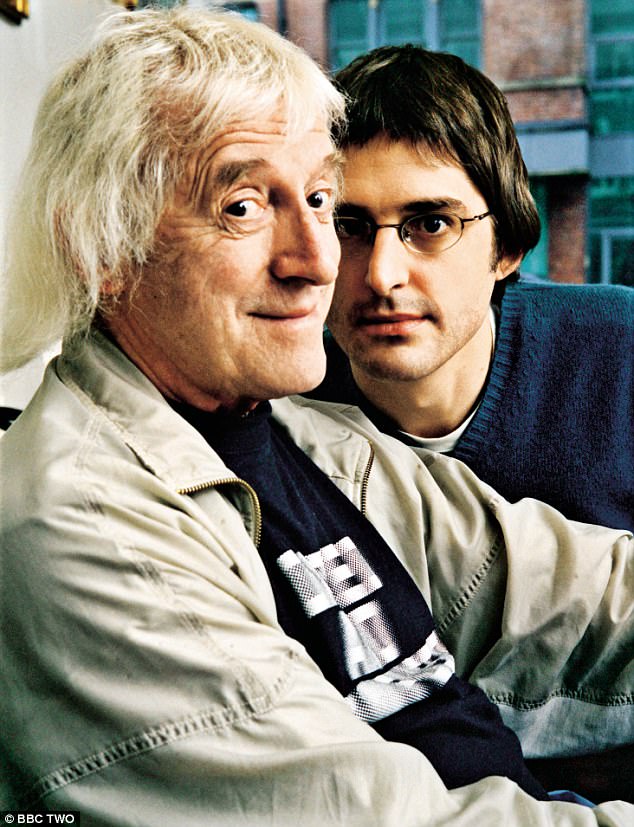 Theroux with Jimmy Savile in his 2000 documentary

‘I regret not being the person to unmask him while he was alive,’ says Theroux. ‘It would have been healthier for society, certainly for his victims and also for his family and people who considered him their friend. In the original film I asked him about the rumours he was a paedophile. He had a level of comfort talking about the rumours that didn’t make me think he was a paedophile – or that he wasn’t. I just knew there was a grey area around his sexuality I’d not got to grips with.’

After Savile’s death Theroux did a follow-up documentary. ‘I wanted to learn why he got away with it and why he never got caught. I needed to put some demons to rest.’

Theroux’s bashful, naive persona allows him to ask the most difficult questions of subjects – often with a hefty dose of dark humour thrown in – and somehow get away with it. ‘I’ve always found humour in the strangest places,’ he admits.

He has befriended some very unlikely subjects along the way, including a man who claimed to have killed ten aliens, and today keeps in touch with Joe Walker, whose alcoholic relapses were captured in agonising detail on screen in last year’s Drinking to Oblivion. ‘I had a coffee with Joe recently, he’s doing well – for now,’ Theroux says softly before saying he has recently tried to contact a female heroin addict from Dark States, his new three-part series on America, but that she has ‘gone quiet,’ something which clearly bothers him.

He was drawn to her, he says, because ‘she was full of potential. I really want to see her do well in life. I’d love to see her come out of this hole she’s been in for the ten years.

‘I do care about these people,’ he continues. ‘I try not to be judgmental. That’s part of the reason for my success. But at the same time I’m aware that I’m a guest in the world that I’m exploring.’ 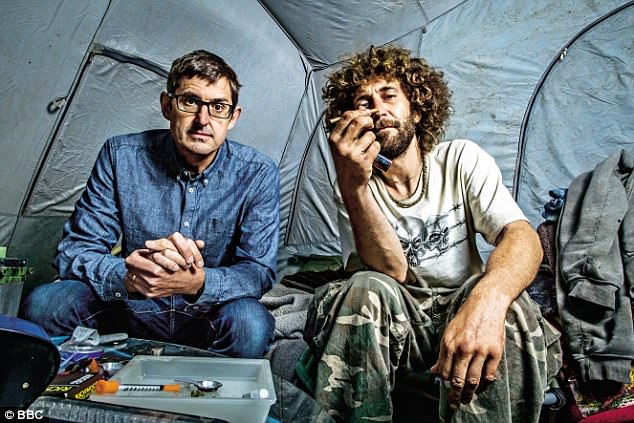 Over the years he has faced a few sticky situations. ‘I have been frightened,’ he admits. ‘Sometimes people snap. I did a story about neo-Nazis in California and we went to a skinhead convention… things can kick off.

‘But when things are getting very serious I find it funny. To me, one of the funniest things is when everyone’s panicking about something. I very much believe in gallows humour.’

He was truly repulsed, though, by a success guru called Marshall Sylver who charged people thousands of dollars on the promise of making them millionaires.

‘There are people with beliefs that are deeply offensive who are nonetheless acting out of a kind of misguided sense of missionary zeal,’ he says. ‘Whereas some like Sylver had a cynical and rather predatory outlook.’

Theroux recently moved to Los Angeles with his wife Nancy and three sons, aged 11, nine, and two to spend a year ‘having fun’, and because, he says, the UK has become ‘too small’ for his brand of filmmaking.

‘Everyone is doing what I’m doing now,’ he says, ‘I tried to do a film on Isis and you’d turn up to meetings and there would be three or four other film crews there, each with a host who looked worryingly like me, right down to the glasses.

‘It’s easier to find subject matter in America, particularly now that Trump’s in charge and it’s weirder than ever. British people tend not to stick their neck out too much, there’s a sense of reserve. Here in the US people tend to be more open. It makes my job easier.

‘Plus I’ve been the beneficiary of benign cultural assumptions, that because of the way I speak I’m somehow intelligent and classy.

‘People over here love the idea of speaking to the BBC. When I’ve done stories in the UK there’s a feeling of the BBC being a bit boring.’

His lanky 6ft 2in frame is trim, thanks in part to a dab of liposuction he had years ago when making a film about Beverly Hills plastic surgeons (‘I had 500cc of fat sucked out). He has cycled to the coffee shop from his Colonial-style home in nearby Los Feliz, a trendy area of LA where neighbours include Leonardo DiCaprio and Mad Men actor Jon Hamm: ‘I prefer to stay healthy walking, biking, doing normal stuff. In LA everyone drives everywhere. I don’t want to live in a metal bubble.’ 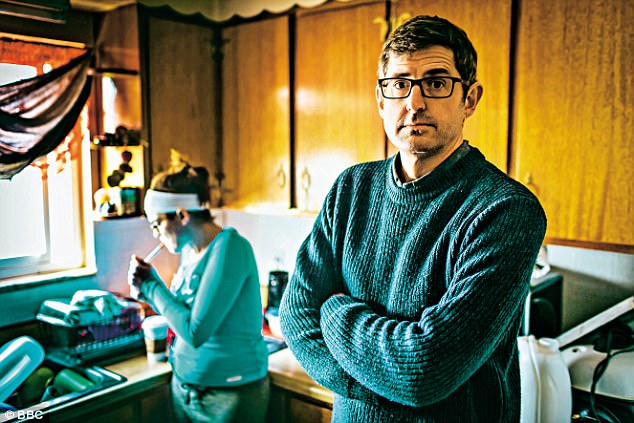 Theroux filming with a heroin addict in Dark States

He has vowed not to ‘go Hollywood’: ‘One of the great things about being in LA is that I have anonymity.’

Theroux, who holds dual citizenship, fell into documentary making purely by chance. ‘I was always drawn to America. I identify more as British because I was raised in the UK but as soon as I left university I came here.’

He landed his first job doing work experience on a newspaper in San Jose, California: ‘It was life changing,’ he says. ‘All the things about America that people sometimes think of as soulless, the mega malls, the endless freeways, I found oddly appealing.’

He says his dream interviewee is Lisa Marie Presley: ‘She is at the centre of the three subjects I find most fascinating: Elvis, Michael Jackson and Scientology. What must it be like having Elvis as a father? What was that marriage to Michael Jackson all about?’

His favourite ever subject?

Unexpectedly he names boxer Chris Eubank: ‘He came from the streets, is intelligent and self-educated. He made it to the top as a boxer and I love the theatrics of his life, how he reinvented himself.’

Being a father has drawn him to more serious subjects.

For Dark States he focuses on Milwaukee, a city once famous for its cheese which is now a gun death capital of America. Then there is the heroin epidemic show and another on prostitutes and pimps.

While he’s made several films about addiction he is ‘too boring’ to suffer any problems like that himself: ‘I enjoy a drink. I used to smoke at parties, I’ve had a spliff.

‘I’m in favour of legalising marijuana. In general, it’s a more benign drug than alcohol. They say it’s a gateway drug but maybe if it was legal it would mark the boundary more clearly about where experimentation should stop.’

He says he plans to remain in LA for a year, but did he come to America to escape Brexit?

He lets out a roar of laughter.

‘Right, I’ve come to the Land of Trump to escape!’

He is constantly on the hunt for new subject matter. His next film will be about anorexia. And after that? ‘Who knows? One thing’s for sure, out here there’s no shortage of subject matter.’