Cancers linked to excess body weight are two times more prevalent in women than men, a new study has found.

Researchers say that about 10 percent of all cancer cases in women occur from being overweight or obese compared to five percent of cases in men.

The team, from the American Cancer Society, says this is because obesity is linked to several female-specific cancers – including breast, ovarian and uterine – and also the higher prevalence of obesity among women.

They also did an analysis by state and cancers linked to excess body weight were the highest in Southern states – such as Texas, Louisiana and Mississippi – and the lowest in Western states including Montana, Colorado, Wyoming and Nevada.

This is due to several factors including lifestyle, poor access to healthy foods and highers rates of physical inactivity. 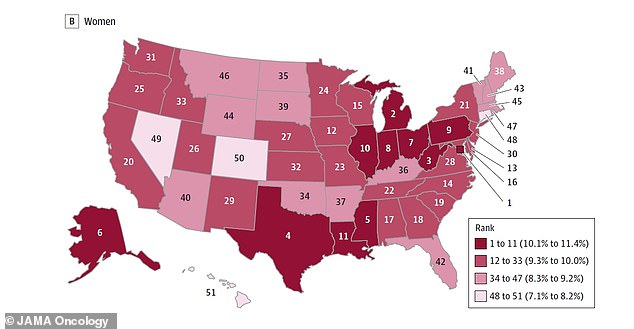 Although men are more likely to be overweight than women, more than 41 percent of women are obese compared to 38 percent of men.

This is because women naturally carry more fat than men, due to the possibility of future pregnancies, and have less muscle mass – which burns more fat tissue.

While the exact cause of how obesity is linked to cancer is not known, there are several mechanisms likely at play.

People who are obese are more likely to have low-level inflammation, which can lead to DNA damage that causes cancer, according to the National Cancer Institute.

Additionally, fat tissue produces estrogen and higher estrogen levels have been linked to an increased risk of breast, endometrial, ovarian and uterine cancers.

For the study, the team looked at cancer cases from all 50 states and the District of Columbia between 2011 and 2015.

Next, researchers used body mass index (BMI) data collected from the 2001 to 2004 Behavioral Risk Factor Surveillance System, which is a survey conducted via telephone by the CDC and state health departments.

BMI is a metric that measures a person’s body size from their weight and height. A healthy BMI is typically measured between 18.5 and 24.9.

Anything under 18.5 is considered underweight. BMIs between 25 and 29.9 fall into overweight territory, and above 30 is considered obese.

They used a BMI time frame a decade earlier to allow for a lag phase, or a period in which being dangerously overweight would increase a person’s cancer risk exponentially.

Finally, the team calculated the population attributable fraction (PAF), which is the percentage of all cases of a specific disease in a population linked to a specific exposure. In this case: cancer linked to excess body weight.

For men on a state-by-state basis, the PAF was lowest in Montana at 3.9 percent and highest in Texas six percent. 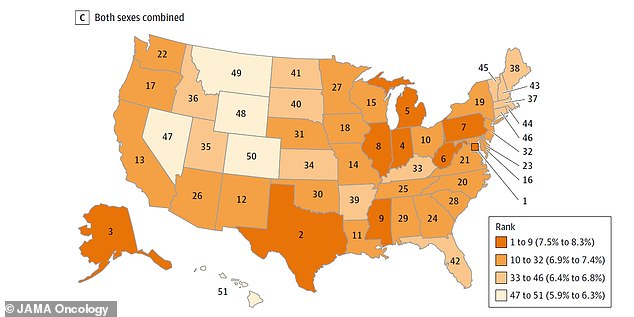 The team says the rates for women are greater because the prevalence of obesity is higher  among women than men and obesity’s link to several female cancers including breast, ovarian and uterine

For women on a state-by-state basis, both the lowest and the highest were more than double with a range of 7.1 percent in Hawaii to 11.4 percent in the District of Columbia.

While the proportion varied among states, at least one in 17 cases of all the cancers in each state could be attributed to excess body weight.

Currently, an estimated 60 percent of American men and women are overweight or obese, according to a report from the University of Washington.

A 2016 study from Harvard University’s School of Public predicted that by 2030, this number will rise to 85 percent – meaning the number cancers linked to excess body weight will only increase.

The authors are calling upon health professionals and policy makers to implement interventions to curb the number of cancer cases including a tax on sugar-sweetened drinks.

‘Broad implementation of known community- and individual-level interventions is needed to reduce access to and marketing of unhealthy foods (eg, through a tax on sugary drinks) and to promote and increase access to healthy foods and physical activity, as well as preventive care,’ they wrote.