Which Industries Will Gladly Accept Your Bitcoins? 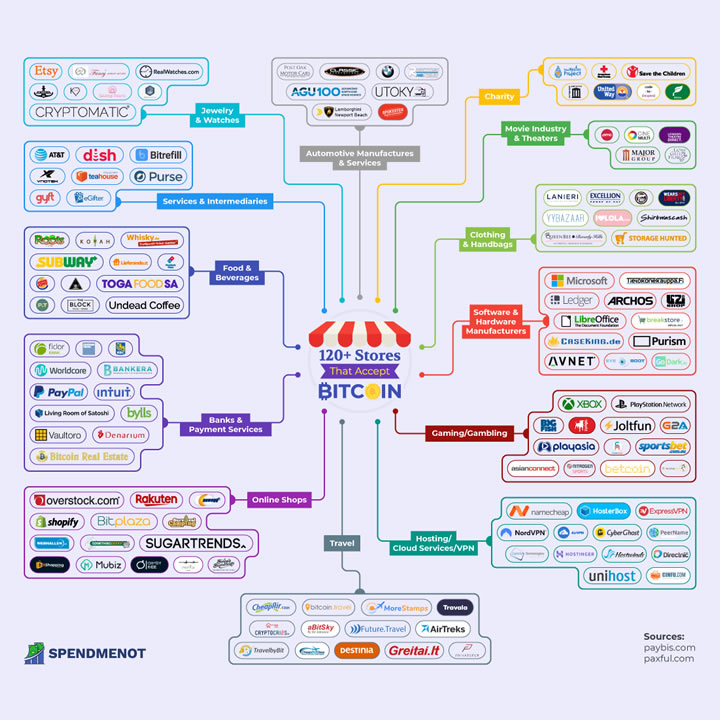 When Satoshi Nakamoto invented Bitcoin in 2009, nobody thought that it would become a revolutionary concept of the 21st century. At the time, most people thought it was a joke and that cryptocurrencies could never work.

A decade has passed, and we can see that those skeptics were wrong. Nowadays, Bitcoin is used as one of the main currencies in numerous industries in the world, including some of the most profitable ones.

Here are some of the biggest industries where you can spend your bitcoins, according to this handy infographic created by SpendMeNot.

If you are a fan of jewelry and watches and you love treating yourself like a king, you can easily do that with Bitcoin. The biggest cryptocurrency in the world has made its way in this lucrative industry, so you can now buy luxury items for yourself or the people you love.

Some of the biggest companies in this massive industry that will happily accept your bitcoins are Etsy, Real Watches, Kobelli, Domoshop, Fancy, and many others.

Ever since it was created, one of the things Bitcoin has been used for is buying food and drinks. We all know about the famous case of Laszlo Hanyecz, who bought a pizza with 10,000 BTC in 2010. Today, that amount of bitcoins is worth around $81 million. Ouch!

Nowadays, you can still use BTC to buy food and beverages, but without giving yourself a lifelong headache. Popular brands where you can do this are Subway, Domino’s Pizza, Burger King, Crypto Coffee, Koyah, and many more.

Bitcoin is a currency, even though digital, so it makes sense that you can use it for payment services. At first, banks around the world considered cryptocurrencies a threat, which they actually are. However, they realized that if you cannot beat them, it is much better to join them.

Some of the banks and payment service providers that are no longer adamantly against Bitcoin include big names in the industry such as PayPal, Goldman Sachs, Royal Bank of Canada, Intuit, and more.

Do you want to travel the world, but you do not have any cash on you? No worries! If you have bitcoins stashed in your digital wallet, you are good to go! You can use BTC to make reservations, book hotels, pay for tickets, and similar. Some travel agencies that accept bitcoins are Cheap Air, Future Travel, Destinia, Bitcoin.travel, etc.

Last but not least, you do not have to spend all of your bitcoins on yourself. You can share some of your crypto wealth with others who are in need. If you are feeling generous and you want to make others happy, we recommend that you check out popular organizations such as The Water Project, Red Cross, Save the Children, or Code to Inspire.

As you can see, numerous industries accept Bitcoin as a form of payment. Therefore, there is nothing to worry about when it comes to spending your valuable BTC. However, you might want to rethink that decision, considering that experts believe the value of Bitcoin is going to skyrocket in the near future.