President Donald Trump will not make the traditional presidential visit to the heavily fortified border between North and South Korea known as the Demilitarized Zone when he visits Asia next week.

A senior administration official said Tuesday during a pre-trip briefing that standing along the strip of land dividing North and South Korea is now a ‘cliche’ that presidents can afford to skip in favor of sending cabinet officials in their place.

‘The president is not going to visit the DMZ. There’s not enough time in the schedule,’ the official said, emphasizing that ‘we just had Secretary Mattis there last week, at the DMZ. We had Vice President Pence there earlier this year. Secretary Tillerson was there.’

‘It’s becoming a little bit of a cliche, frankly,’ the official insisted.

President Donald Trump will not visit the Korean peninsula’s ‘Demilitarized Zone’ (DMZ) during his stop in Seoul, South Korea next month, the White House confirmed on Tuesday 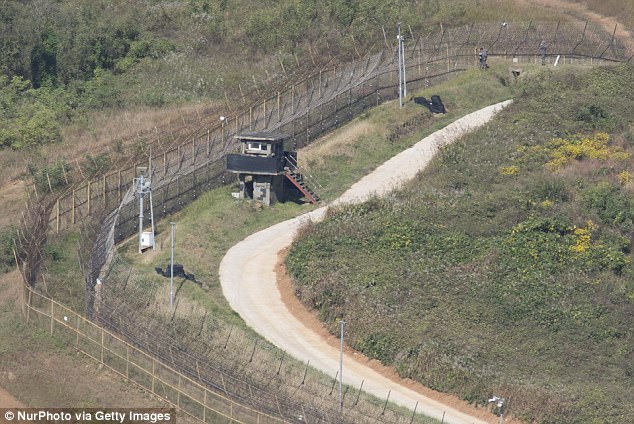 The DMZ along the 38th parallel is 160 miles long but just 2.5 miles wide, with South Korean and North Korean forces lined up on either side; it sits just 35 miles from Seoul, where Trump will spend two days

Trump will spend more than two days in Seoul, where the DMZ looms just 35 miles to the north. His schedule includes bilateral talks and a speech to South Korea’s national assembly.

But instead of going to the DMZ, Trump will accept an invitation from Korean president Moon Jae-in to visit Camp Humphreys, a jointly funded military base about 40 miles to the south.

‘It would have had to be the DMZ or Camp Humphreys,’ the senior official insisted on Tuesday, adding that ‘no president has visited Camp Humphreys.

‘We thought that made more sense in terms of his messaging, in terms of the chance to address families and troops there.’

The border-area DMZ has separated the North and South for 64 years. 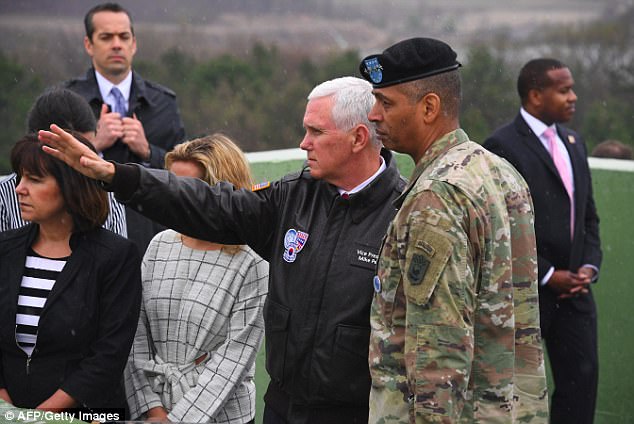 Vice President Mike Pence visited the DMZ in April so the North Koreans, he said, could ‘see our resolve in my face’ 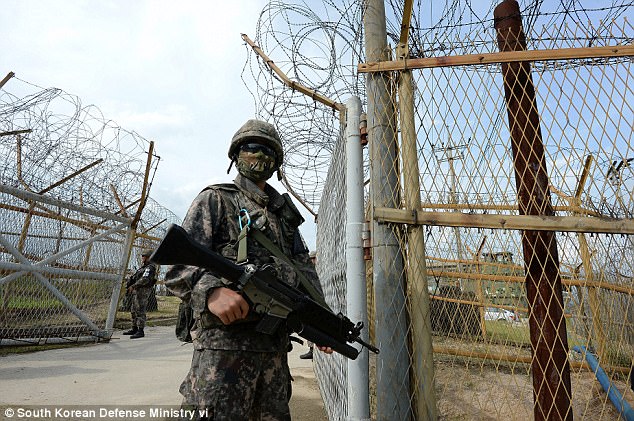 South Korean soldiers are pictured patrolling near the demilitarized zone in 2015, near where land mines – suspected to have been planted by North Koreans – exploded

The White House official who briefed the press on Tuesday downplayed the significance of DMZ visits, saying fewer than half of the U.S. presidents who served in office since the end of the Korean War have made the trip.

All but one American commander-in-chief since Ronald Reagan, however, have gone.

Often wearing bomber-style jackets and flanked by military officers, presidents have used binoculars to peer at the barren strip of land at the 38th parallel and delivered forceful remarks denouncing the threat posed by the rogue regime led by Kim Jung Un in Pyongyang.

Pence visited the DMZ in April so the North Koreans could ‘see our resolve in my face.’

Trump has frequently turned to bellicose rhetoric to denounce Kim Jong-Un, whom he has given the mocking nickname ‘Little Rocket Man’ and has threatened to unleash ‘fire and fury’ on North Korea if does not cease its nuclear weapons ambitions.

The inflammatory language has done little to deter the North Korean dictator, who has repeatedly launched missile tests, including some that have flown over Japan.

Beyond addressing the dangers posed by Pyongyang, Trump will spend much of the trip advocating for American economic interests in the region, including in meetings with Chinese President Xi Jinping.

Trump has long bemoaned the United States’ trade deficit with China, a country he has called a ‘currency manipulator,’ though he has signaled that he would soften his stance toward the continent’s growing economic power if it would step up its efforts at containing North Korea. 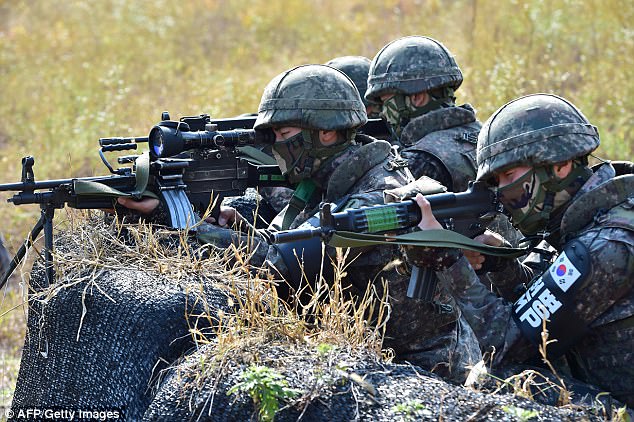 South Korean soldiers are constantly training near the DMZ in order to prepare for invasions from the north; the Korean peninsula is the world’s last Cold War frontier as the Stalinst North and pro-Western South have been technically at war since the 1950s 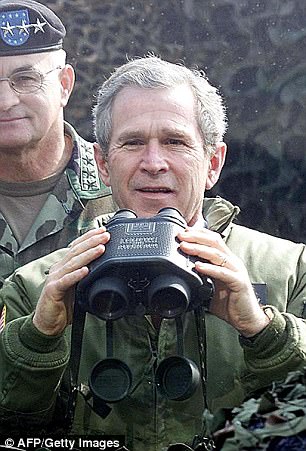 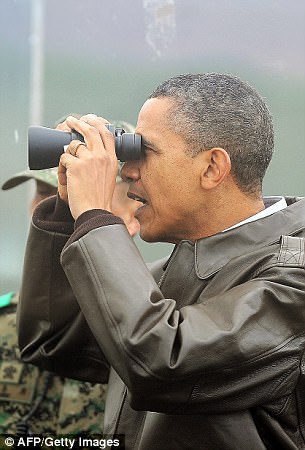 Former presidents George W. Bush (left) and Barack Obama (right) both visited the DMZ and peered across to the North Korean side using military binoculars

The White House outlined a robust schedule for five-nation Trump’s trip, the longest of his presidency and first to Asia, which begins November 3.

The journey will begin in Hawaii, where Trump will meet with military leaders at the U.S. Pacific Command and tour Pearl Harbor, including the wreckage of the USS Arizona that remains capsized in shallow water after the sneak attack by Japan in 1941 that pulled the U.S. into World War II.

From there, the president will fly to Japan, where he will speak to Japanese and U.S. service members, visit with the families of Japanese citizens abducted by the North Korean regime and meet with Prime Minister Shinzo Abe, who just posted an impressive election win. Trump and Abe will play a round of golf, as they did at Trump’s Florida golf course in February.

Trump will then travel to South Korea for a state visit. In addition to his visit to Camp Humphreys, Trump is scheduled to visit a military cemetery and deliver a speech to the national assembly in which he will call on the international community to maximize the pressure being placed on Pyongyang.

On November 8, the first anniversary of Trump’s stunning election win, the president will visit Beijing for a state visit with Xi, who recently consolidated his hold on power during a gathering of the Communist Party Congress. 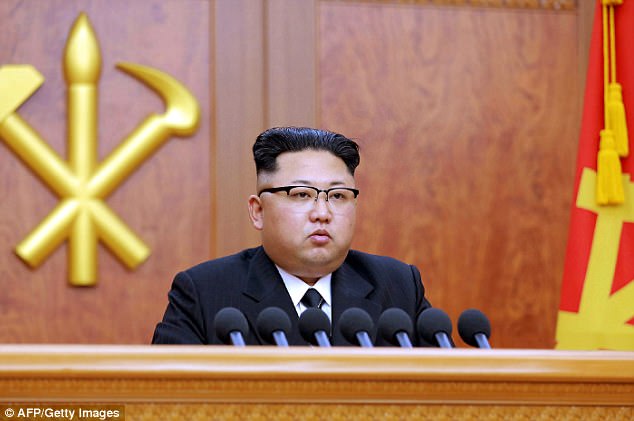 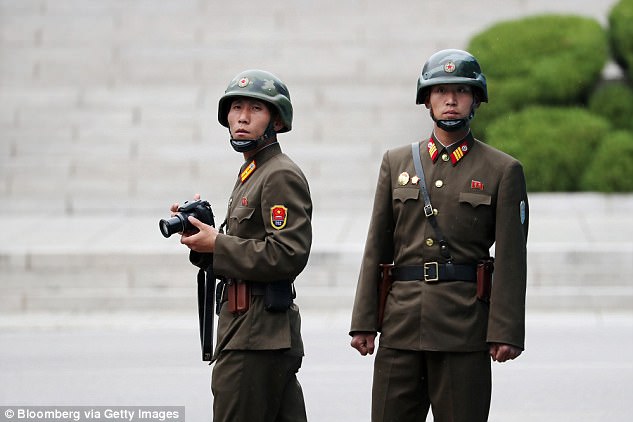 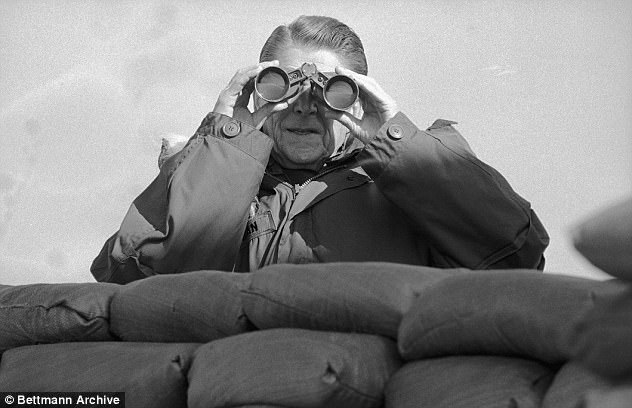 Even in the 1980s, then-president Ronald Reagan visited the DMZ and looked through binoculars while standing behind a wall of sandbags

China has long provided much of North Korea’s economic lifeblood, and Trump will push Beijing to take further steps to isolate Kim Jung Un. But the White House said the president will also demand that China must provide fair and reciprocal treatment of American businesses, cease predatory intellectual property practices and look to find solutions to the one-sided trade deficit.

After departing China, Trump will attend the first of the two summits that make up the back half of his Asian trip. He will first travel to Da Nang, Vietnam, where he will attend the Asia-Pacific Economic Cooperation summit and deliver a major speech on the need for fair trade and economic practices in the region, Trump said.

He will attend a series of bilateral and multi-lateral meetings with world leaders while there, though the White House said is not saying whether one of them will be Russian President Vladimir Putin.

Trump will travel to Hanoi for his second day in Vietnam to meet with its president Trần Đại Quang and underscore the United States’ commitment to its relationship with Vietnam.

The White House is not predicting that he will visit any sites dating from the Vietnam War, including the Hanoi Hilton, the prison that once housed US military officers, including John McCain, Trump’s frequent political rival.

Trump’s final stop will be Manila in the Philippines, where he spend two days at the Association of Southeast Asian Nations (ASEAN) summit to highlight the United States’ interests and partnerships in the region.

He will also meet with Philippine President Rodrigo Duterte, who has been accused of a series of human rights abuses, including killing suspected drug dealers.