Who are the staff helping Klopp and Zidane to deliver European glory?

Liverpool and Real Madrid are set to square off in one of the most highly-anticipated Champions League finals in recent memory on Saturday night.

Both teams’ preference for attack over defence will hopefully mean goals and players are putting the final touches on their preparations as the countdown to Kiev draws ever closer.

With enormous backroom teams at both clubs working tirelessly to support the players, Sportsmail looks at those working alongside Jurgen Klopp and Zinedine Zidane to help deliver European glory. 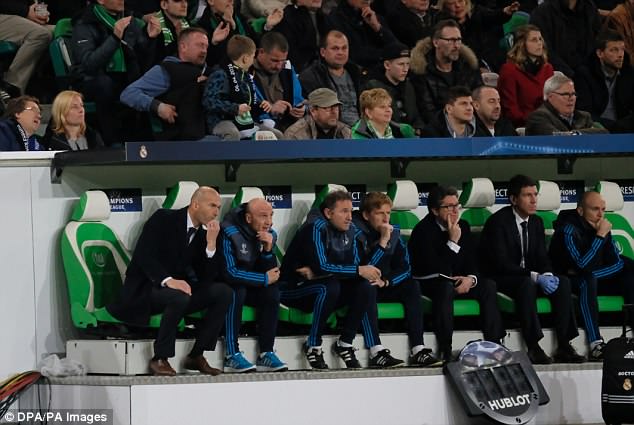 Krawietz forms the third string of the triple Klopp-Buvac-Krawietz ensemble which steers the ship that is Liverpool Football Club. Where Klopp sees Zeljko Buvac as the brain of the operation, he admits Krawietz is the ‘eye’ of proceedings and the tactical string-puller. His role has been increased in size in recent weeks in the absence of the other member of the band.

All-seeing, Krawietz’s surveying input is invaluable to Klopp, with constant suggestions, amendments and predictions on what the first team could and should be doing to improve. Krawietz has no significant playing experience in the game, instead arriving in his initial role at Mainz after obtaining a sports degree at the University of Mainz. 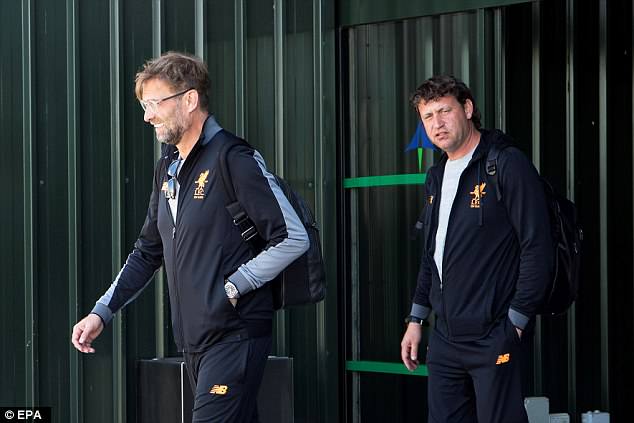 Achterberg joined Liverpool’s backroom staff in June 2009 after making the short trip across the Mersey from Wirral neighbours Tranmere Rovers.

The Dutchman spent more than 10 years at Prenton Park as a player and, latterly, a goalkeeping coach before bringing his wisdom to Melwood in order to develop the Liverpool ‘keepers of tomorrow.

‘What can I say about John? I’ve never met a guy like him! He is a goalkeeper coach 24 hours a day!’ Klopp told Liverpoolfc.com. 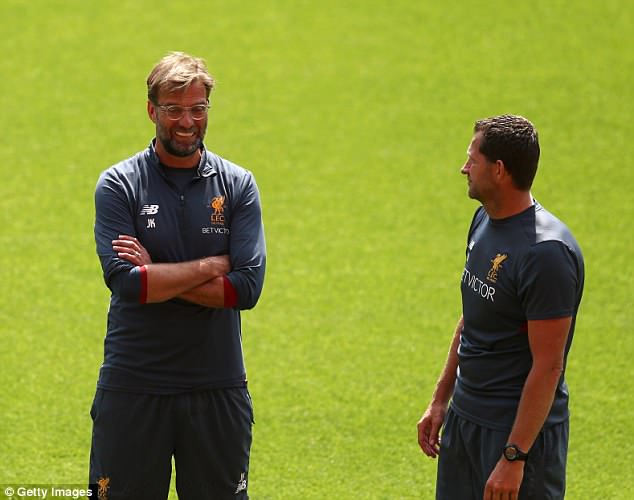 Klopp admits he has never met anyone like John Achterberg, who talks about goalkeeping 24/7

The man often dubbed as Jurgen’s ‘Kloppelganger.’ Kornmayer is the man who puts into place the immense fitness levels of which Klopp sides are famed for.

Kornmayer gained Klopp’s admiration while working for his Bundesliga rivals Bayern Munich – with the German manager crediting him as the source behind the success of their incredible 2012-13 treble-winning season.

‘Korny [Kornmayer] is kind of the drill sergeant here. He needs to be. We make the decisions what he has to do and he gives the advice of which specific areas we can improve,’ said Klopp.

‘He needs to be the “bad boy” from time to time because players don’t like running. ‘That’s Korny’s idea, if you ask me you can have a day off but Korny said you have to!’ 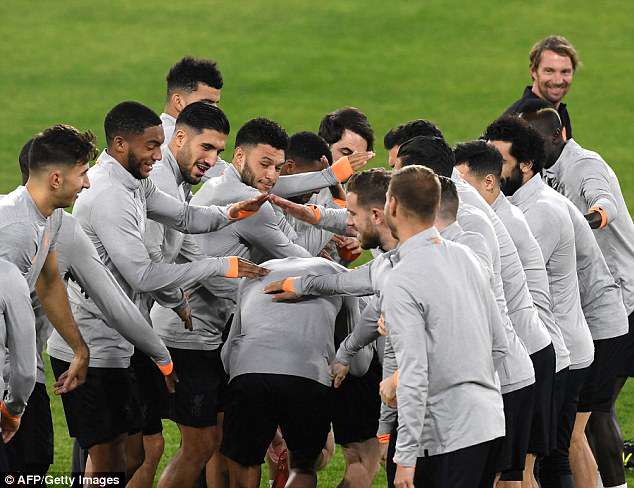 Massey joined the Melwood backroom team on a full-time basis in July 2015 as Liverpool’s head of medical services. He initially joined the club in 2013 as the academy doctor and match-day medical co-ordinator, before acting as first-team doctor on an interim basis in 2014 – a position that was made permanent the following year.

Rydings arrived at Melwood in July 2011 as part of the club’s link with the city’s John Moores University.

His role focuses on the strength and rehabilitation of the players. He said: ‘My role is quite varied but predominantly gym based.

‘I take quite a lot of the responsibility for quantifying the amount of work they take on. I love it here. All of the players are great lads and really good to get on with.’ 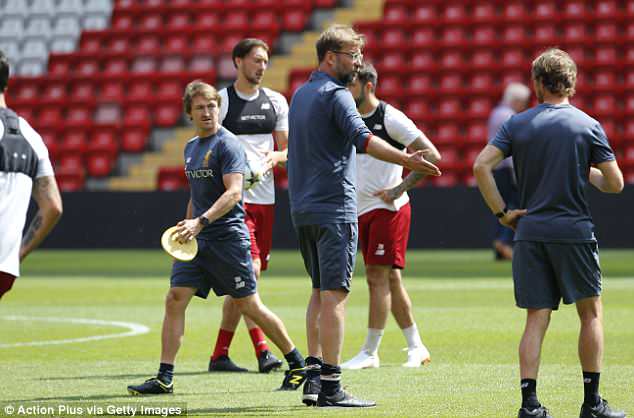 Carter is one of the men responsible for the first team’s kit for both training and matches. He travels to every senior game home and away, ensuring Klopp’s squad have everything they need.

His association with the Reds began in the 1970s as coach driver, a job he took up full-time in 1986. It was Gerard Houllier who offered him the chance to work at Melwood in 1999 and he’s been there ever since.

Nemmer is one of the unsung heroes behind the scenes at Anfield, heavily respected for the influence she has had upon the players and their dietary habits – in turn directly impacting upon their performance out on the pitch.

Nemmer arrived on the back of three years at Bayern, where she worked in the same position after being recruited shortly after Pep Guardiola took over at the Allianz Arena.

Speaking proudly of Nemmer’s contributions, Klopp said: ‘Mona [Nemmer] is heart and soul, she is everything. She is so smart. Not one player is in doubt about her – that’s outstanding.’ 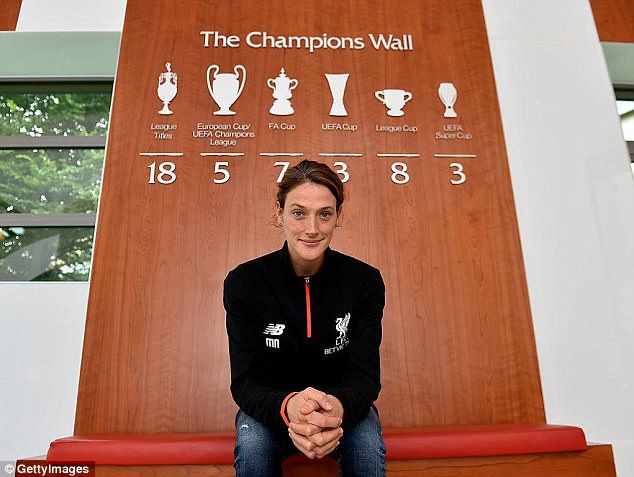 Leyland joined Liverpool from Burnley in the summer of 2013, where he worked under both Eddie Howe and then Sean Dyche.

‘We cover all aspects of live match and post-match analysis. Our job after a game revolves around us breaking down the game into team aspects and individual player aspects relating to the manager’s philosophy,’ he’s told the club’s website.

‘We database statistics and video in relation to how the manager wants our team to play – both good things, and in areas to improve. We then feed that back to players, as individuals and as a team.’

Mathieson was born and raised in East Ayrshire – the home county of iconic Reds boss Bill Shankly. His role is to provide first-team coaches with material to ensure they can prepare sufficiently for their next opponents. Mathieson’s match day role takes him away from the rest of the squad as he regularly watches upcoming opponents.

Rohrbeck joined Liverpool as first-team physiotherapist in 2017. Rohrbeck made the move to Merseyside after 14 years with German club FSV Mainz, where he had previously worked with Klopp during the Reds manager’s spell there. 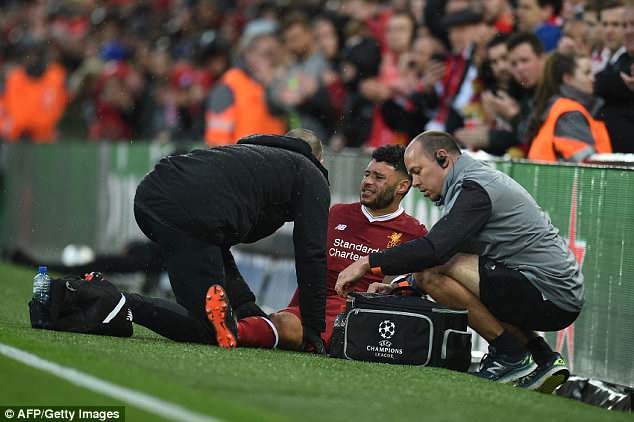 Rohrbeck (R) moved to Merseyside after 14 years with Mainz, where he had worked with Klopp

Last season Bettoni was listed as Los Blancos’ kitman in official reports because he didn’t yet have his coaching license and therefore could not give instructions to the players. Now he has the relevant qualifications and can work as Zidane’s right-hand man in an official capacity. 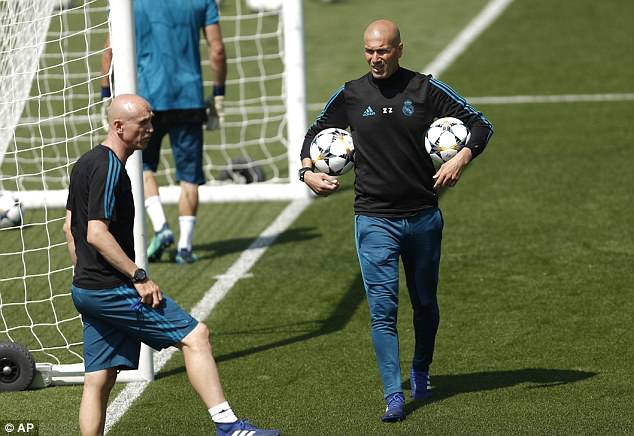 Zidane took Msaidie to Real Madrid’s B team Castilla from France where he worked with the national football federation. His background isn’t only limited to football and he’s worked in athletics. He also boasts a medical background and carries the reputation as a specialist in injury rehabilitation. 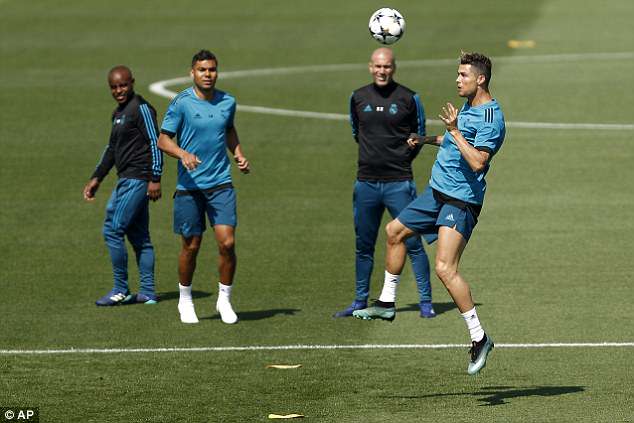 Luis Llopis served under Rafa Benitez at the Bernabeu before continuing in his role under Zidane. He has previously worked at Levante with current Sevilla boss Joaquin Caparros. During his time at Estadi Ciutat de Valencia, Llopis forged a strong relationship with current Real No 1 Keylor Navas and has helped the Costa Rican to flourish in the Spanish capital. 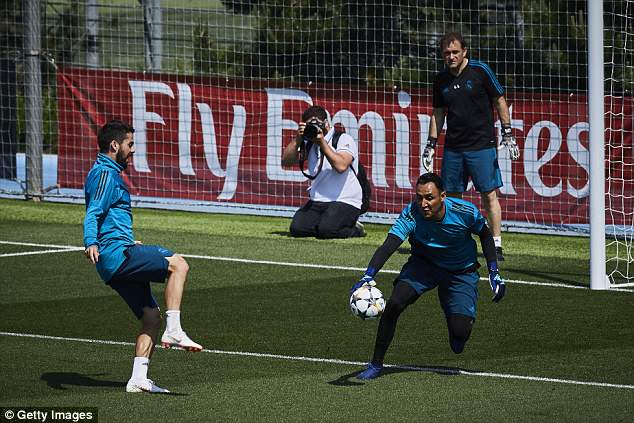 Having only just arrived at Lyon in the summer of 2016 on a three-year contract, the club were reluctant to let the Italian depart after Zidane called offering a job.  Zidane was one of Pintus’ former players when he worked at Juventus and the Frenchman was desperate to recruit the coach after fears over the team’s fitness grew when he took over from Benitez. 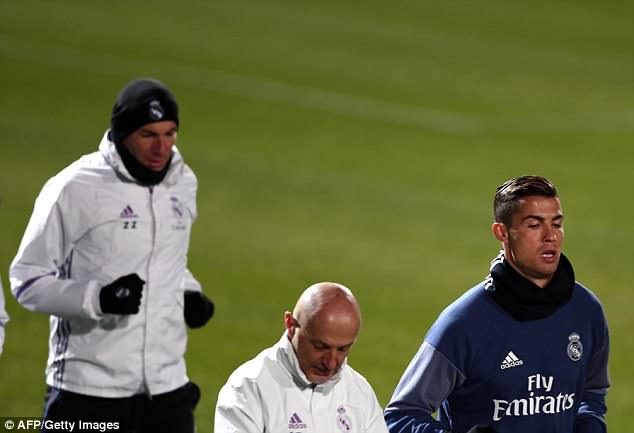 Mallo has previously worked as a fitness coach at both Manchester City and Atletico Madrid. The Spaniard is considered one of the authority figures on the topic of periodisation training within sport and has had books published in the field. 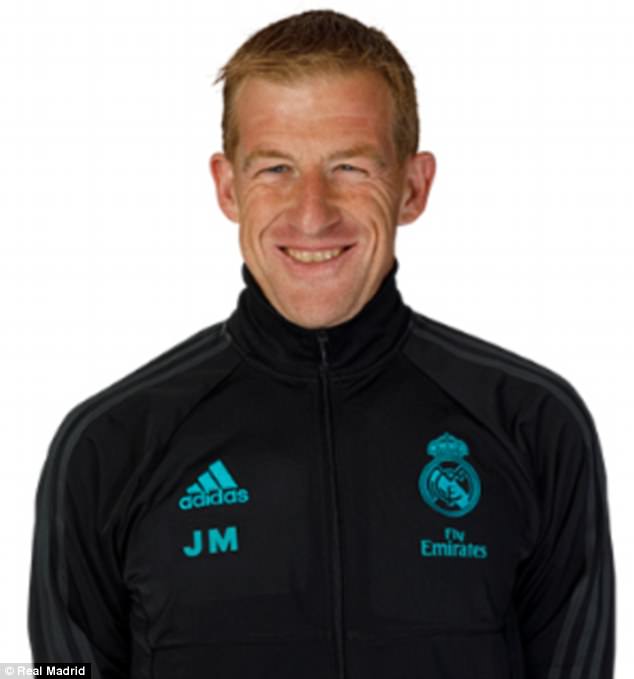 Full name Jose Carlos Garcia Parrales. Articles about Zidane’s boot room tend to only mention him briefly. He’s the guy that trots around the pitch with the players coming back from injury until they’re allowed to get back to ball work. He liases with doctors and tries to get timings right in terms of different stages of recovery. 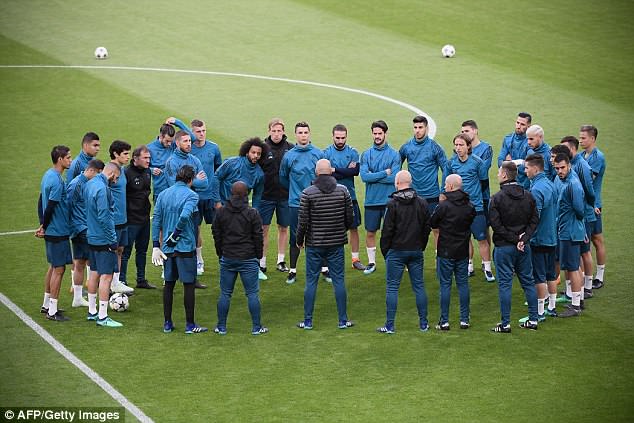