That’s what many are asking after Sheeran’s recent interview on Access in which the pop singer sported a ring and stated he would ‘never do anything too public’ if he did indeed marry his longtime girlfriend.

But just who is Cherry Seaborn? Here’s everything you need to know about her, including her relationship with Sheeran.

Who is Cherry Seaborn?

The daughter of Matthew Seaborn and Ann Lancaster, Seaborn attended Thomas Mills High School in Suffolk, UK alongside Sheeran and later attended Durham University in the United Kingdom to study molecular biology and Duke University in the United States where she played field hockey and enrolled in the Master of Management Studies program at the school’s Fuqua School of Business.

‘I looked into different schools that were good academically and also at hockey, and Duke was one that really jumped out at me.

‘I made my decision purely based on recommendations.

‘Duke has such a good name in England and there were a lot of people who told me to go there. There were also some English girls [at Duke], so I talked to them too.’

She also led her field hockey team in the UK to two consecutive runner-up finishes in the Investec English Woman’s Hockey League and also played for England’s Under 18 national team in 2007 and 2008 where she won both silver and bronze medals.

Hailing from an athletic family, her father also played cricket and soccer at Oxford Polytechnic.

Seaborn reportedly works as a senior consultant in risk advisory for the Deloitte accounting firm and has one brother, Charlie, who plays rugby at Durham University.

Previously, she worked in New York City before relocating to London to be closer to Sheeran, whose net worth is now reportedly about $85 million (£66 million).

Sheeran and Seaborn met in high school in Suffolk, UK before parting ways after Sheeran left school to pursue his burgeoning music career.

However, the couple later reunited and rekindled a romantic relationship, reportedly being spotted at a New York Mets baseball game and partying with DJ Calvin Harris in September 2015.

In 2016, she and Sheeran, who currently live together, took several months off to focus on their relationship together.

In a January 2017 interview with Zane Lowe of Beats One, Sheeran said that ‘… the catalyst of taking a year off was also the fact that my partner quit her job in New York, which she’s now got back in London, which is really cool. But we were just basically like, “Let’s quit our jobs and have a year of forming a tight bond.” So we went traveling and spent every day for a year together’.

The couple reportedly traveled to countries like New Zealand, Japan and Ghana together.

In January 2018, the pop star revealed that he was engaged to Seaborn since late 2017.

‘Got myself a fiancé just before new year. We are very happy and in love, and our cats are chuffed as well,’ he stated in an Instagram post. 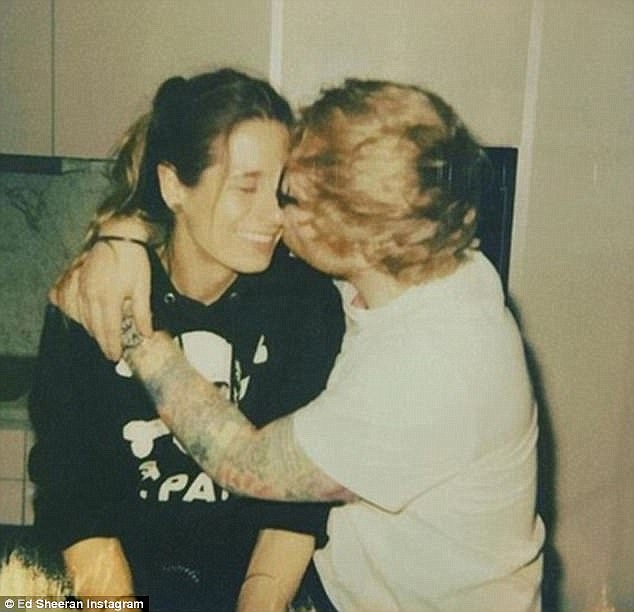 Though the famously private Sheeran didn’t divulge many other details in the months since their engagement, he recently sparked rumors that he and his fiancé were already married on an August 27, 2018 interview with Access.

When asked about the upcoming wedding date and details, the singer gave a somewhat rambling response before simply shrugging and pointing to a silver ring on his wedding finger.

Sheeran, when then asked about the ring and possibility that he was indeed married, replied: ‘Well, I never do anything too public anyway.’

The singer previously sparked marriage rumors after being spotted with a ring on his wedding finger while leaving the 2018 BRIT Awards, though he later said it was actually an engagement ring gifted as a present to him by Seaborn.

The pop star has never been shy, however, about expressing his love for Seaborn, who reportedly inspired his hit single Perfect.

Adding more fuel to the fire of speculation was Sheeran’s own father John who refused to either confirm or deny that his son was already married.

‘I’m very sorry, I can’t say anything. We try and keep as anonymous as possible for obvious reasons. I do apologise, but I just don’t give interviews on anything like that.

‘I am not going to comment because we really do want to be as private as possible. I am sorry. I know you have got a job to do – but I haven’t seen it. I am not really into all that stuff. Sorry about that,’ he said at his Framlingham, UK home.