Australians may never know who is to blame for the Ruby Princess fiasco at the end of a criminal investigation which could take at least 18 months to reach open court.

The New South Wales state government has ordered a criminal inquiry into why 2,700 people were allowed to leave the coronavirus-ridden cruise ship on March 19.

The family of grandmother Janet Lieben, from NSW, are also calling for justice after she became one of the 12 passengers on board to die from the virus.

But revelations from a police investigation may be kept secret unless an individual has criminal charges laid against them.

Jerry Lieben is calling for justice for his wife, Janet, (pictured together) after she became one of the 12 passengers from the ill-fated Ruby Princess to contract the coronavirus 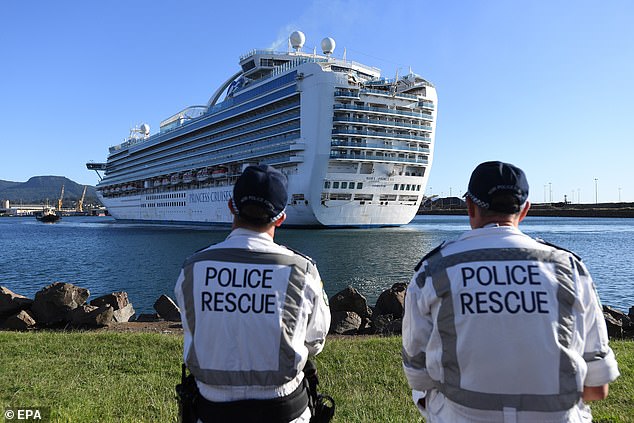 The Ruby Princess, with only crew onboard, docks at Port Kembla south of Sydney to refuel and for staff to be tested for COVID-19. The result of a criminal investigation into its docking in Sydney Harbour on March 19 be kept secret unless an individual faces criminal charges

Even if someone faces charges only a reduced amount of evidence will be made publicly available in open court, The Australian reported.

New jury trials from March 16 have been suspended – adding to a backlog of cases scheduled to go before the courts – meaning the Ruby Princess case may not be heard until late 2021.

The investigation, announced by NSW Police Commissioner Mick Fuller on Sunday, may be given special funding by the state government because of the scale on the inquiries needed.

Commissioner Fuller said in the weekend press conference the investigation would seek to uncover whether any breaches of the Biosecurity Act and NSW laws had been made.

Interviewing many of the 4,000 passengers, the ship’s captain, crew members and staff from government agencies will likely form a large part of the investigation.

It comes after Jerry Lieben and his wife, Janet, both developed symptoms of the deadly respiratory infection on the Ruby Princess just one day after they were allowed to disembark the ship.

Mr Lieben told A Current Affair on Monday night someone needed to be held accountable for the debacle.

‘Why did they put us on the ship?’ he asked. ‘Why did they let us board? There must have been red flags,’ he said.

He claims the ship was under lockdown and their boarding time on March 8 was delayed – and not enough was done to ensure they were healthy when they disembarked after the trip to New Zealand. 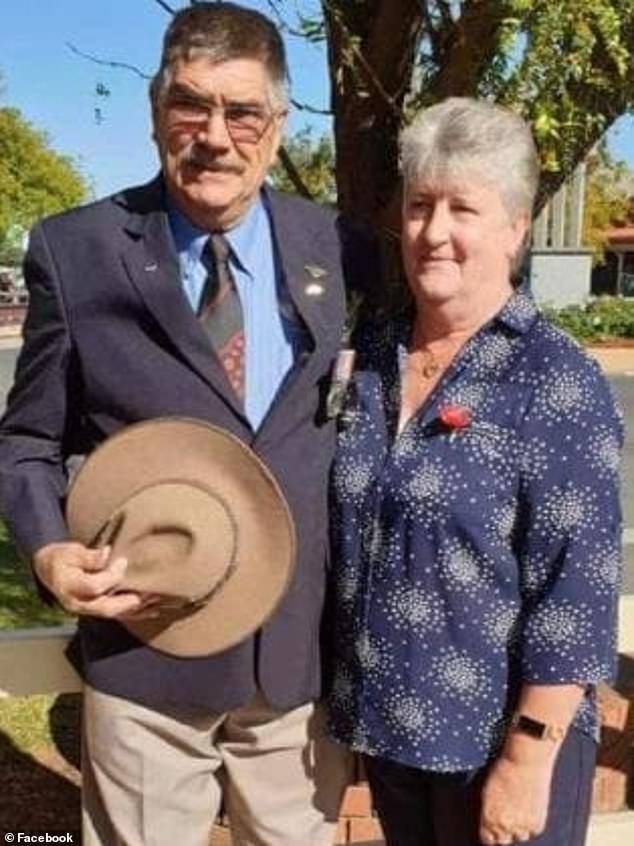 Jerry (pictured, left) and Janet Lieben (right) had been enjoying a special 11-day cruise with old army friends around New Zealand on the doomed Ruby Princess

The now widowed great-great-grandfather also recalled his last conversation with his wife, telling her he loved her while she was fighting for life in a hospital bed.

‘I was in the room next to her, I managed to see her before she died. But it was too rough of her on her breathing so I had to leave,’ he said while tears streamed down his face.

‘She was really getting upset, I combed her hair and told her I loved her and left the room and that’s the last I seen her.’ 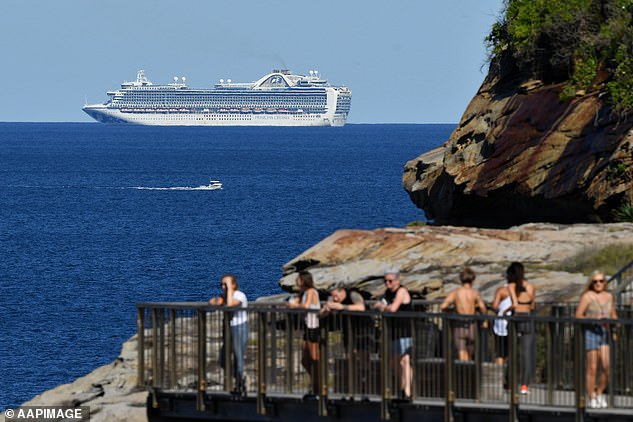 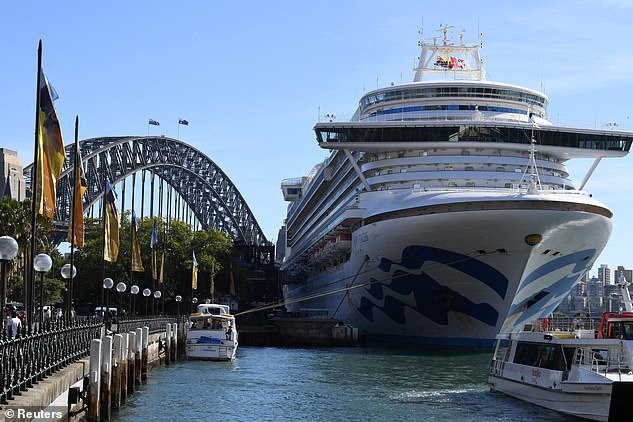 SHOULD PASSENGERS HAVE BEEN ALLOWED OFF THE RUBY PRINCESS CRUISE SHIP?

He said while he initially felt nothing but pain and sorrow over the loss of the love of his life, grief has now turned to anger.

‘After what happened, I just think I need justice for my beautiful wife, because none of this should have happened,’ he said.

The couple returned to Sydney Harbour from the trip of a lifetime on March 19, and had heard whispers of respiratory infections on board.

So they were shocked at the ease in which they disembarked the ship.

‘When it was our turn to leave, we said ”ah well, we’re going to get checked”, but nothing happened… We collected our luggage, but nothing got checked.’

Mr Lieben said they were handed a form asking them to self isolate at home for 12 days, but that there were no checkpoints to ensure they were of good health before making the trip home to central New South Wales. 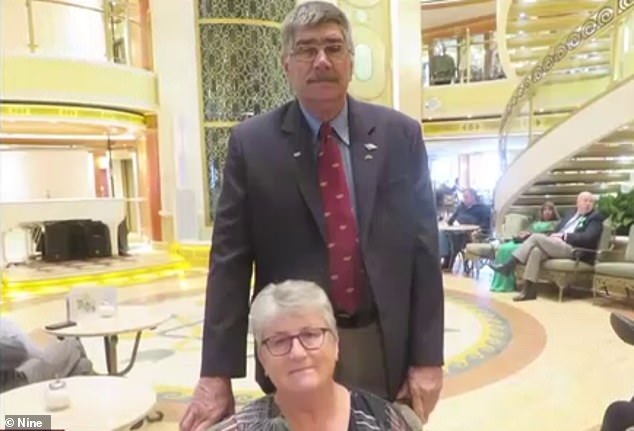 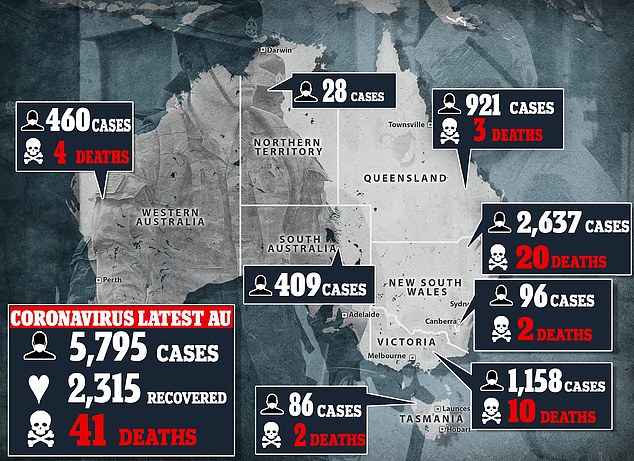 So far, at least 5,795 people in Australia have been infected with coronavirus, including 41 people who have died 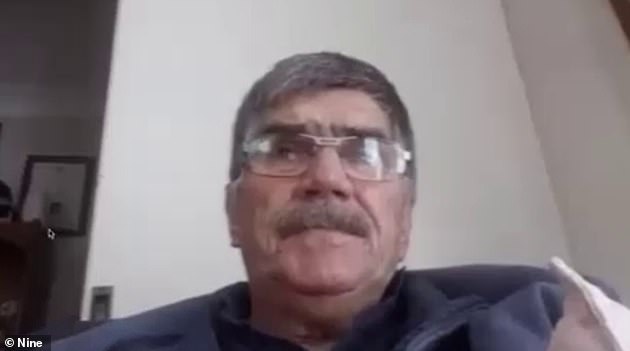 Within 24 hours of arriving home, the pair knew something wasn’t right.

They called Orange Hospital and were asked to visit the facility for a COVID-19 test. Both results returned a positive reading.

Despite their age, the pair continued to quarantine at home before Mr Lieben experienced a nasty fall. Both were rushed to hospital, and Ms Lieben’s condition deteriorated. 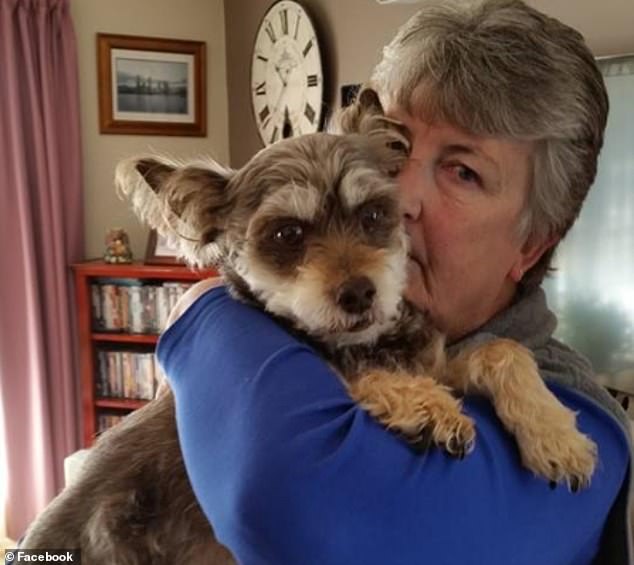 Mr Lieben has opted against a funeral for his wife because nobody – not even himself – would be able to attend.

He is still quarantined and showing symptoms of coronavirus and has been granted daily 15-minute visits with his son to provide him care.

The army veteran made the difficult decision to cremate his wife’s body, and will celebrate her life with a memorial ‘once this is all over,’ he said.

On Sunday, NSW Police Commissioner Mick Fuller confirmed a criminal investigation will look into the handling of the fiasco.

The commissioner said it was ‘too early to tell’ whether a crime was committed, but said there was ‘no doubt’ coronavirus was brought off the ship.

The investigation – led by the NSW police homicide squad – aims to identity how passengers were allowed to disembark the Ruby Princess in Sydney, resulting in several deaths and COVID-19 outbreaks throughout the country.

‘The only way I can get to the bottom of whether our national biosecurity laws and our state laws were broken is through a criminal investigation,’ Mr Fuller said.

He told reporters transparency regarding patient health on board the cruise ship was a key question for the investigation.

A total of 2,700 passengers – ten of who have since died from coronavirus – were able to disembark without health checks under the cover of darkness at 2.30am on March 19.

More than 620 of the ship’s passengers have since been confirmed to have the virus.

But explosive phone calls between Ruby Princess officials, NSW Port Authorities and NSW Ambulance officers, who were called to help ill passengers, reveal the debacle could have easily been avoided.

In fact the NSW Port Authority initially told the ship’s captain not to dock as planned because of concerns passengers had COVID-19, before a midnight phone call that changed everything, The Sunday Telegraph reports.

Logs from that night by NSW Port Authority officials – who oversee the entrance of all ships to Sydney Harbour – reveal they refused the Ruby Princess entry about 11.30pm on March 18.

That decision was made after emails between the ship’s doctor and NSW Health that outlined concerns over 110 sick passengers onboard.

Among the sick were 17 with ‘temperatures over 38C’ and six who had ‘muscle aches and diarrhoea, severe vomiting or headaches’ – all common coronavirus symptoms.

In a conversation between a Ruby Princess official and a NSW Ambulance officer just before 9pm that night, it is clear there were concerns that some passengers may be suffering from the virus. 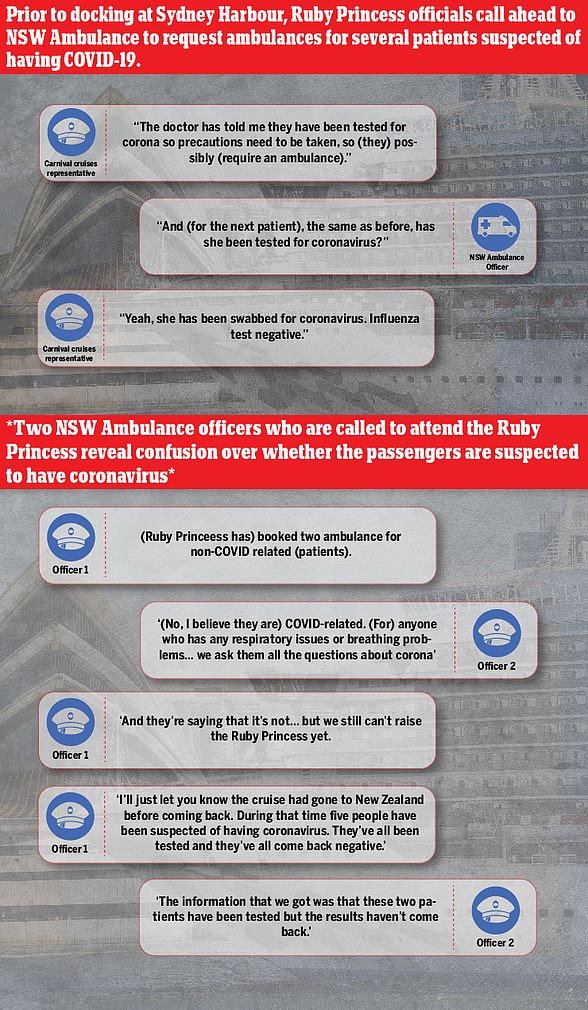 It came two days after Prime Minister Scott Morrison announced a 30-day ban on all cruise ships arriving in Australia.

But the harbour master reversed the decision just an hour later.

Despite being expected to dock at 6am the next morning, the ship arrived at port at 2.30am.

It led to confusion among two ambulance officers who were called to tend to the ill Ruby Princess passengers.

In another explosive phone call the two officers debated the competing advice they had received from Ruby Princess officials as to whether passengers were suspected of having the virus and whether tests had come back negative.

When the Ruby Princess left Sydney Harbour for a trip to New Zealand it was seen to be a medium risk of having coronavirus passengers.

By the time it was halfway through the trip, that ranking had somehow been reduced to low risk – a decision that was defended by NSW Chief Health Officer Kerry Chant.

NSW Police have since launched an investigation into the handling of Ruby Princess’ arrival in Sydney.