Why there’s more to Florida than just Disney

The sea is hotter than the water in our washing machine back home. My clothes get washed at 30c – the temperature of the water at Manatee Public Beach on Florida’s Gulf coast is 31c.

We’ve flown here with our young family and a crazy idea: can you spend a holiday in Florida in the company of real animals, rather than Disney’s pretend ones? And what will our children, George, 11, and Daisy, seven, make of it?

I have nothing against Mickey Mouse. Except that after more than one day in a theme park, I want to scream.

So we stay five nights on Anna Maria Island, around a two-hour drive south-west from Orlando, and then a further five nights in Kissimmee, right on Disney’s doorstep.

Anna Maria Island, in the Bradenton area on Florida’s west coast, is just seven miles long — and so narrow that you can see the sea from both sides of our rental home.

There are wide, sandy beaches and the sky seems extra big because no building is more than three storeys high.

Fast‑food chains are banned. I don’t see any graffiti or litter.

On our first day, we’re eating breakfast in a cafe when I glance up at the TV screen above the counter. One of the local station headlines is: ‘Child got off at wrong bus stop.’ We tootle around on a golf cart. There are cars here, though not loads. The island of Anna Maria (population 8,000) is so friendly that the traffic wardens are volunteers. ‘I guess they think they’re giving something back,’ says a shopkeeper.

We go horse-riding in the sea one evening. We lollop across the beach, while a white ibis, a tiny fish in its pointy beak, bobs along the water’s edge. Then it’s our turn to wade in.

Our horses stride through the waves, until the water is almost up to their shoulders. Then they begin cantering.

Daisy is thrilled. Even more so when our guide yells back at her: ‘Jump in the water, grab your horse’s tail and hold on. We call this horse-skiing.’ 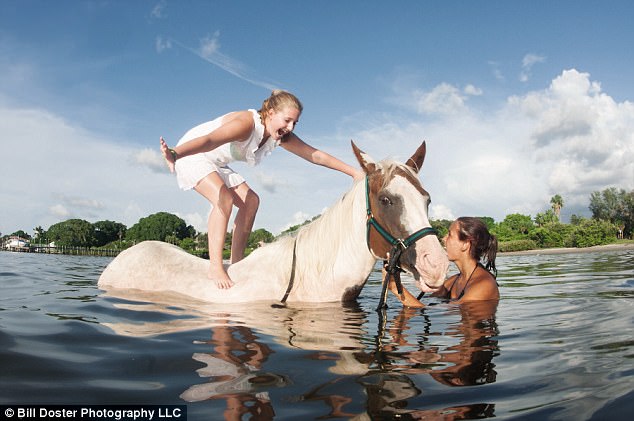 Taking the plunge, carefully: One of the highlights of the trip was a horse ride in the sea

The horses race off, pulling us in their wake. By the end, we’re exhausted — and exhilarated. The ride is not cheap, at around £100 per person, but it’s worth it.

Another day, we take a boat trip. We see two dozen dolphins, some just 10 ft away.

But mostly, we just laze on the glorious, white-sand beaches.

Eventually, we leave the Gulf Coast and drive inland for two hours to Kissimmee.

This really is Disney’s backyard: our rented house in the Reunion Resort is a tantalising 20 minutes away from the Magic Kingdom.

Our villa is extraordinary. There are three dishwashers, and the fridge is the width of a double bed.

Here, too, the wildlife is tremendous. We go kayaking at Shingle Creek, a small inland river, weaving through a forest of twisty cypress trees.

We see herons, eagles, turtles and, for 90 minutes, nothing that wouldn’t have been living here 500 years ago. A couple of days later, we head out onto the water again, this time for an airboat trip on the Everglades.

Tall, thick grasses push their way through the water, interspersed with thousands of yellow lotus flowers.

The vegetation is so dense that if you cast your eye to the middle distance, it’s as if you’re looking at a ploughed field.

Then the captain switches off the engine and we spend some quality time in the company of a 7 ft wild alligator. Astonishing.

We all agree that our Florida trip was the best family holiday ever. And the good news is that both Kissimmee and Anna Maria Island emerged unscathed from the hurricanes that ripped through parts of the state.

Admission time. After the kayaking, the horse-riding, the dolphins, the pelicans, the swimming and the alligator-spotting, we went somewhere else.

Yes, we spent a day at Disney. An excellent one, in fact. Well, we had come all that way. You’d be mad not to, wouldn’t you?