The Duke and Duchess of Cambridge last night recreated a moment from the Queen and Prince Prince Philip’s 1953 royal tour of Jamaica as they arrived at the Governor General’s residence for a black tie dinner.

Prince William, 39, and Kate, 40, descended the same staircase in King’s House, Kingston, where the Queen, then 27, and the Duke of Edinburgh, 32, were photographed almost 70 years ago.

The Queen’s visit came six months after the Coronation and her arrival with her handsome husband in the West Indies was early on in an epic Commonwealth tour that would last another six months.

The couple spent their time glad-handing local dignitaries and well-wishers, visiting hospitals and waved to 20,000 schoolchildren who gathered at Sabina Park, home of the country’s cricket team, to catch a glimpse of the visiting royals.

While the Duke and Duchess of Cambridge have also been given a warm welcome – illustrated by the photos of the extraordinary crowds in Trench Town – the tone of the visit is vastly different.

Their tour is taking place amid growing uncertainty about the Royal Family’s role in its Caribbean realms. There have been protests, awkward meetings and reports that the nation is moving ahead with plans to remove the Queen as head of state.

The difference between the two royal tours was exemplified in Prince William’s speech last night when he faced the issue of Britain’s historic role in the slave trade head on, describing it as ‘abhorrent’ and a ‘stain on our history’. 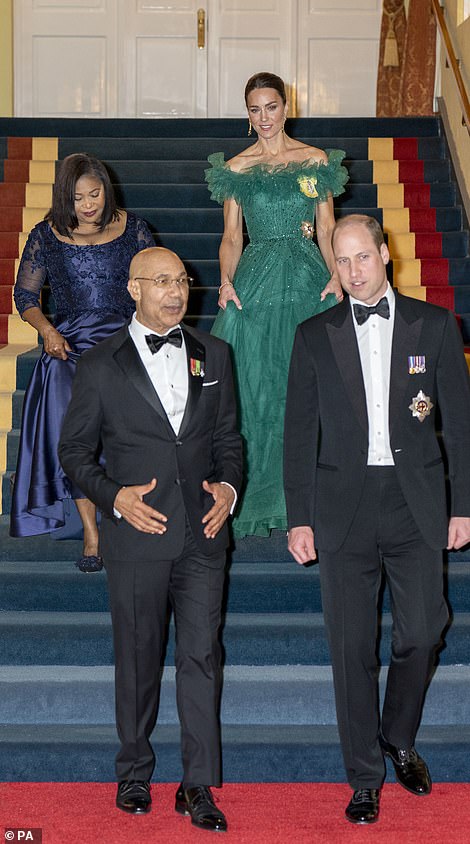 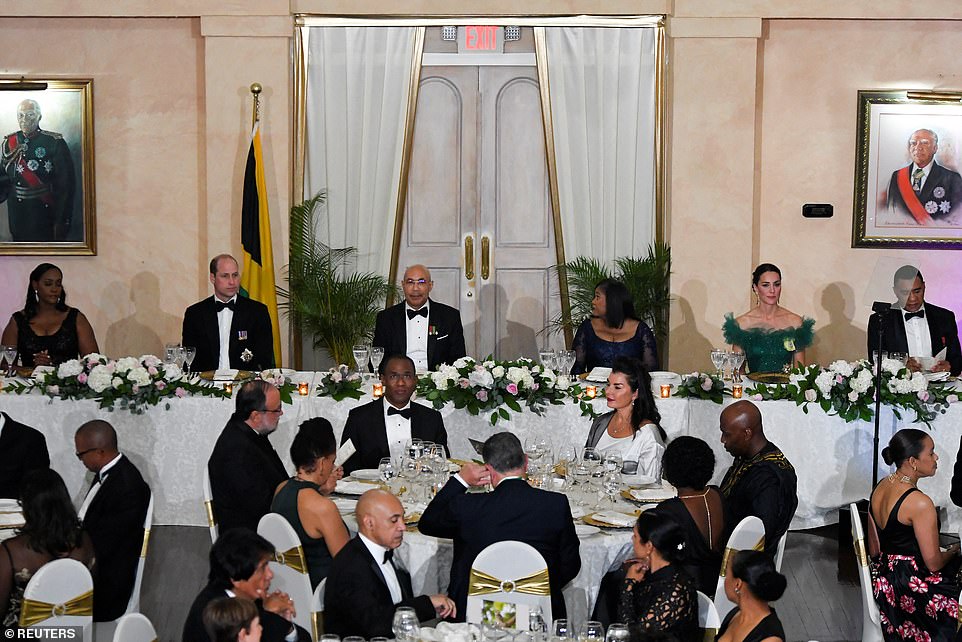 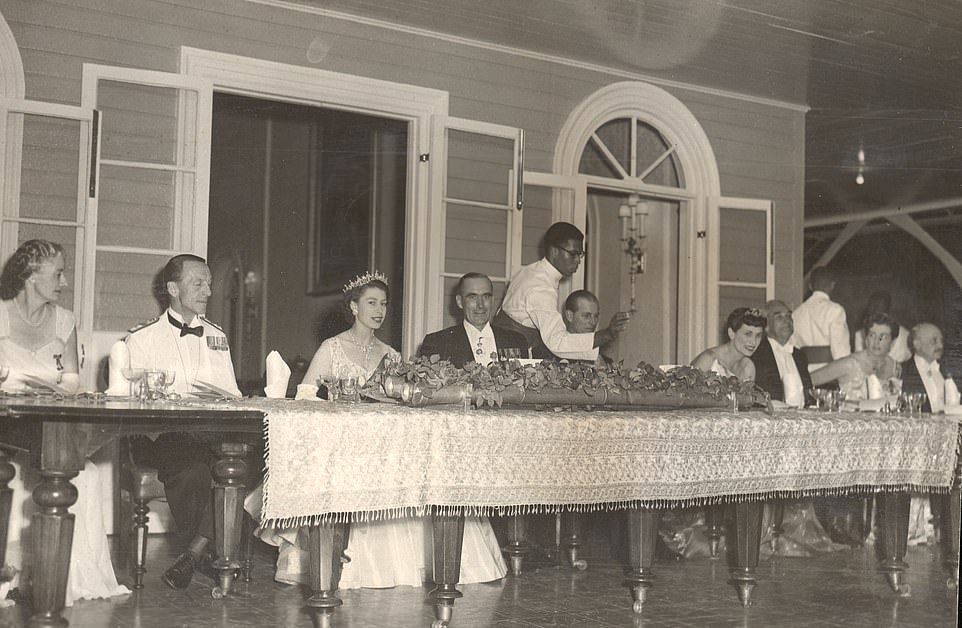 The Queen dines with dignitaries including Sir Hugh Foot, Governor of Jamaica (centre) at King’s House in 1953 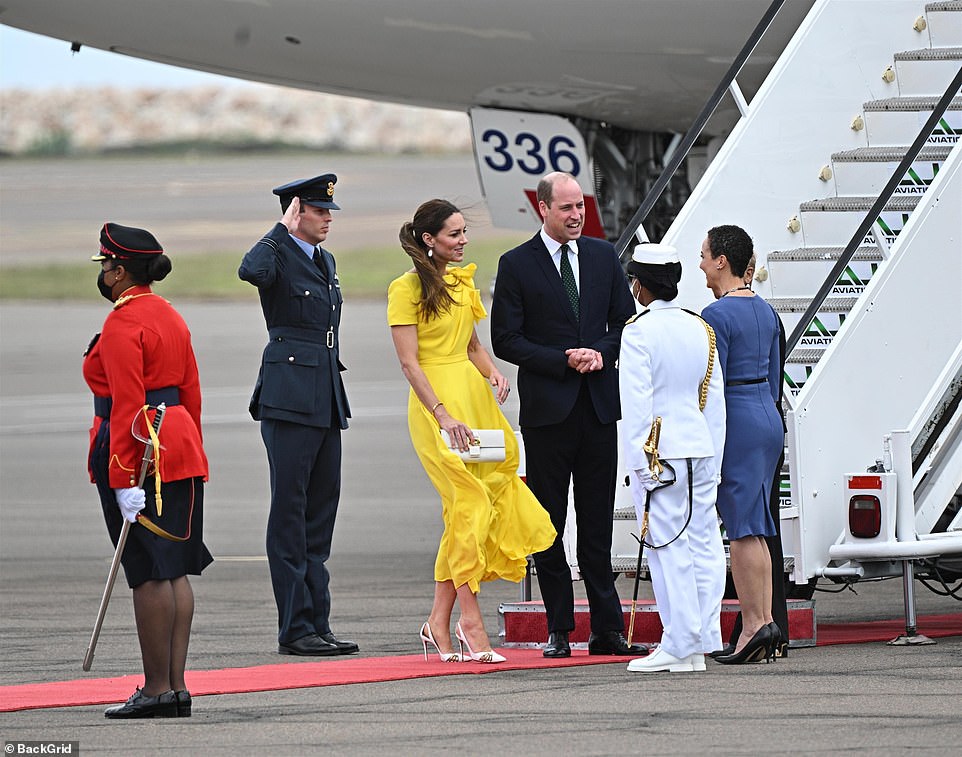 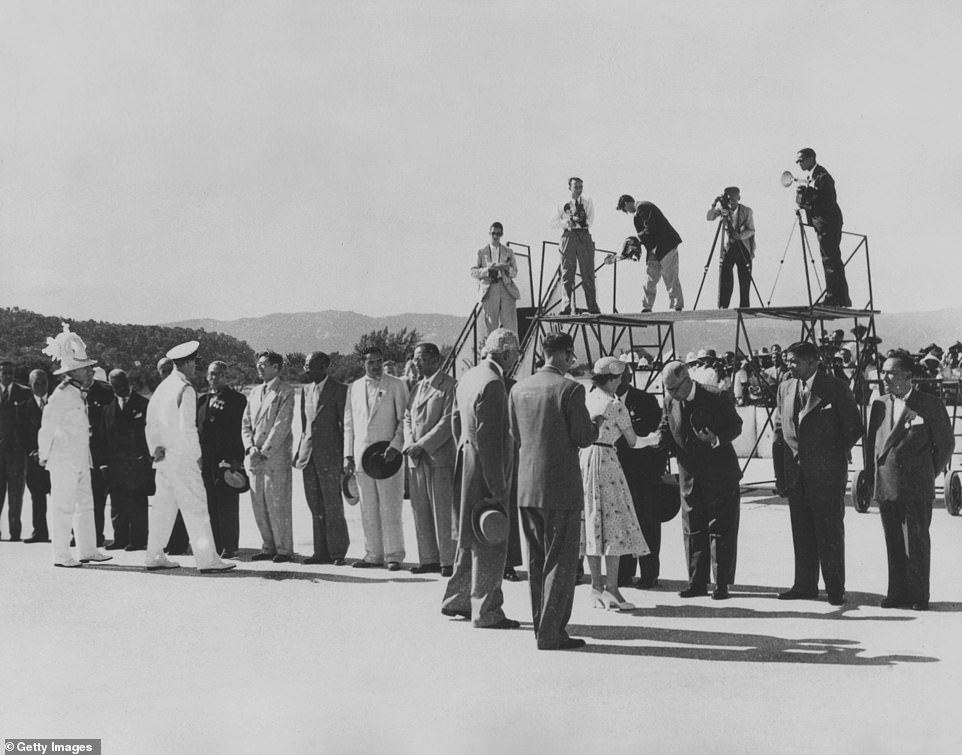 The Queen and Prince Philip are introduced to representatives of other West Indian territories by Alexander Bustamante, Chief Minister of Jamaica, upon their arrival at Montego Bay in Jamaica

On the fifth day of their tour of the Caribbean, the future king expressed his disgust at the ‘appalling atrocity’ that has left such a heavy legacy in Jamaica and expressed his ‘profound sorrow’ that it had ever happened to Jamaican dignitaries.

He also referred to his father’s previous condemnation of slavery, saying: ‘Anniversaries are also a moment for reflection, particularly this week with the International Day of Remembrance of the Victims of Slavery and the Transatlantic Slave Trade.

‘I strongly agree with my father, The Prince of Wales, who said in Barbados last year that the appalling atrocity of slavery forever stains our history. I want to express my profound sorrow. Slavery was abhorrent. And it should never have happened.

He continued: ‘While the pain runs deep, Jamaica continues to forge its future with determination, courage and fortitude.

‘The strength and shared sense of purpose of the Jamaican people, represented in your flag and motto, celebrate an invincible spirit. It is this same spirit that spurred on the Windrush generation, who came to the United Kingdom to help rebuild after the Second World War.

‘We are forever grateful for the immense contribution that this generation and their descendants have made to British life, which continues to enrich and improve our society. 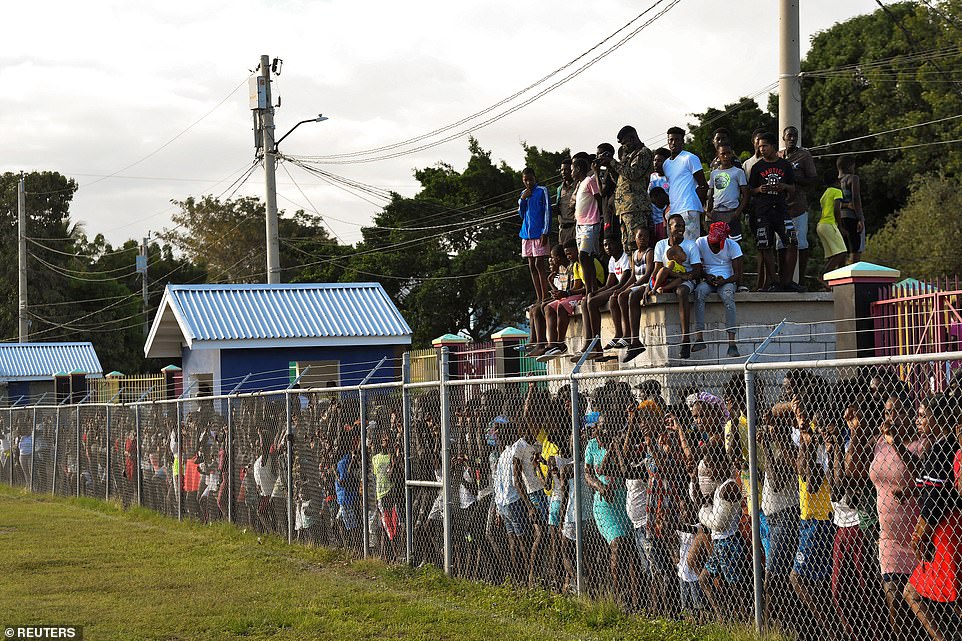 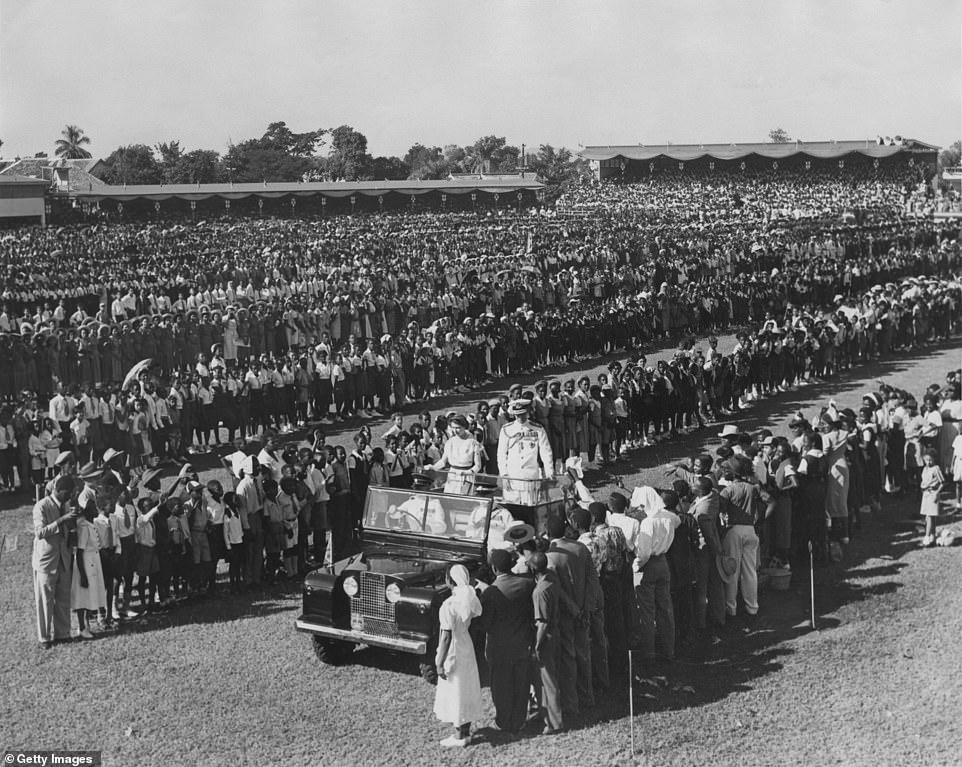 The Queen and Prince Philip are greeted by thousands of people at a rally at Sabina Park, Kingston, in November 1953 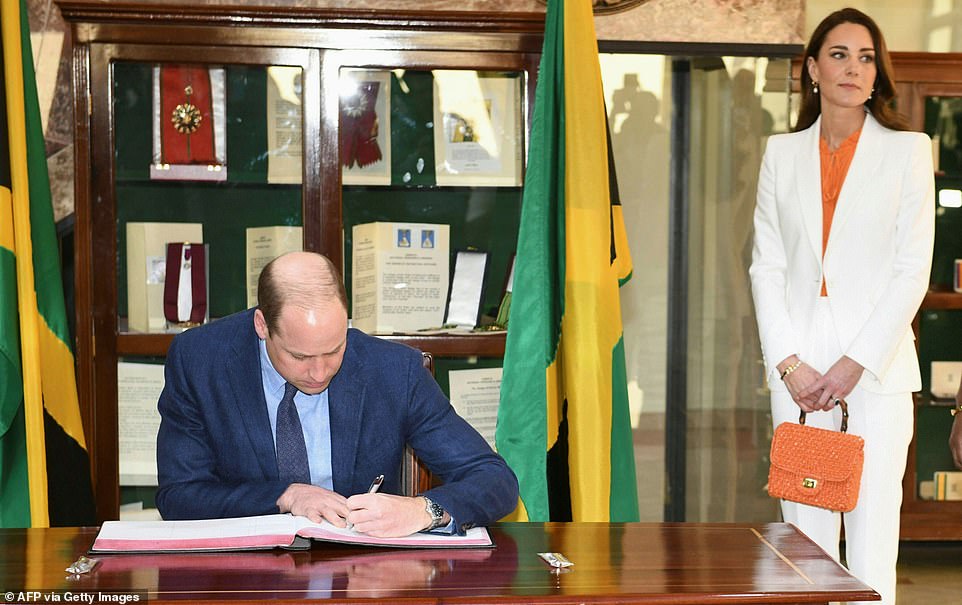 The Duke of Cambridge signs the visitor’s book at the Vale Royal, the official residence, in Kingston, yesterday 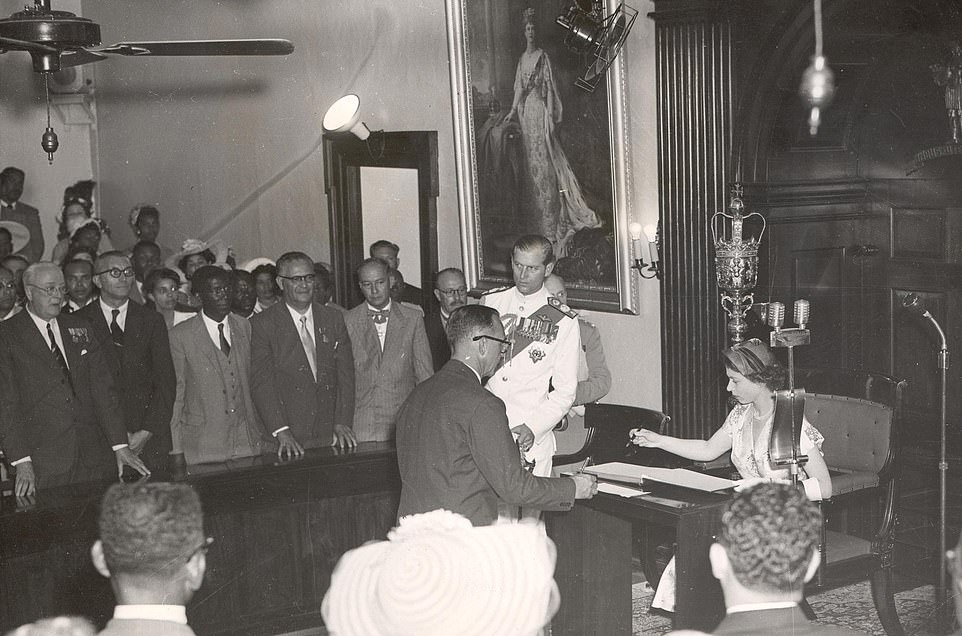 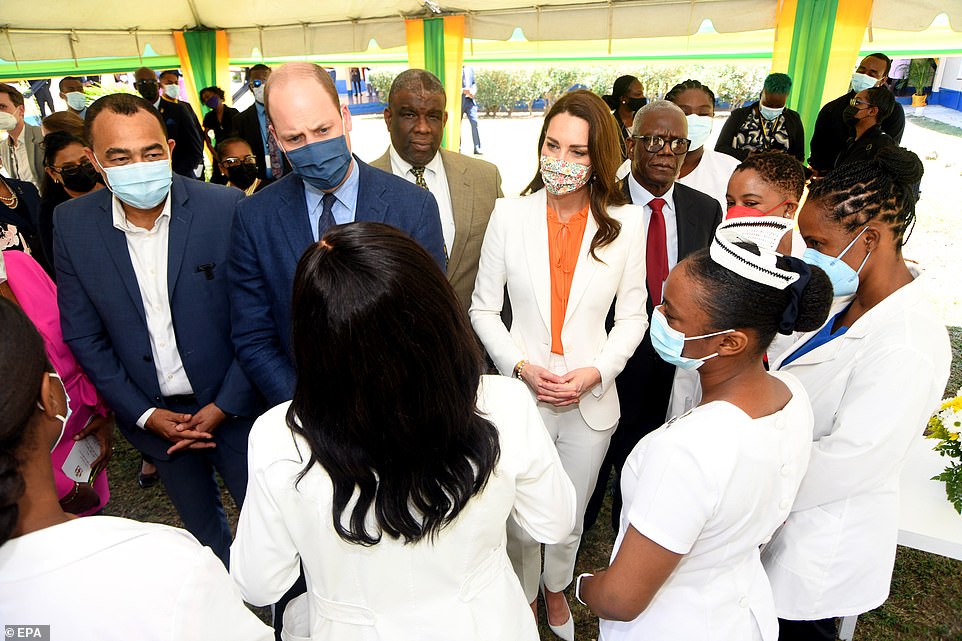 The Duke and Duchess of Cambridge greet nurses on a visit to the Spanish City Hospital, Jamaica, on Wednesday 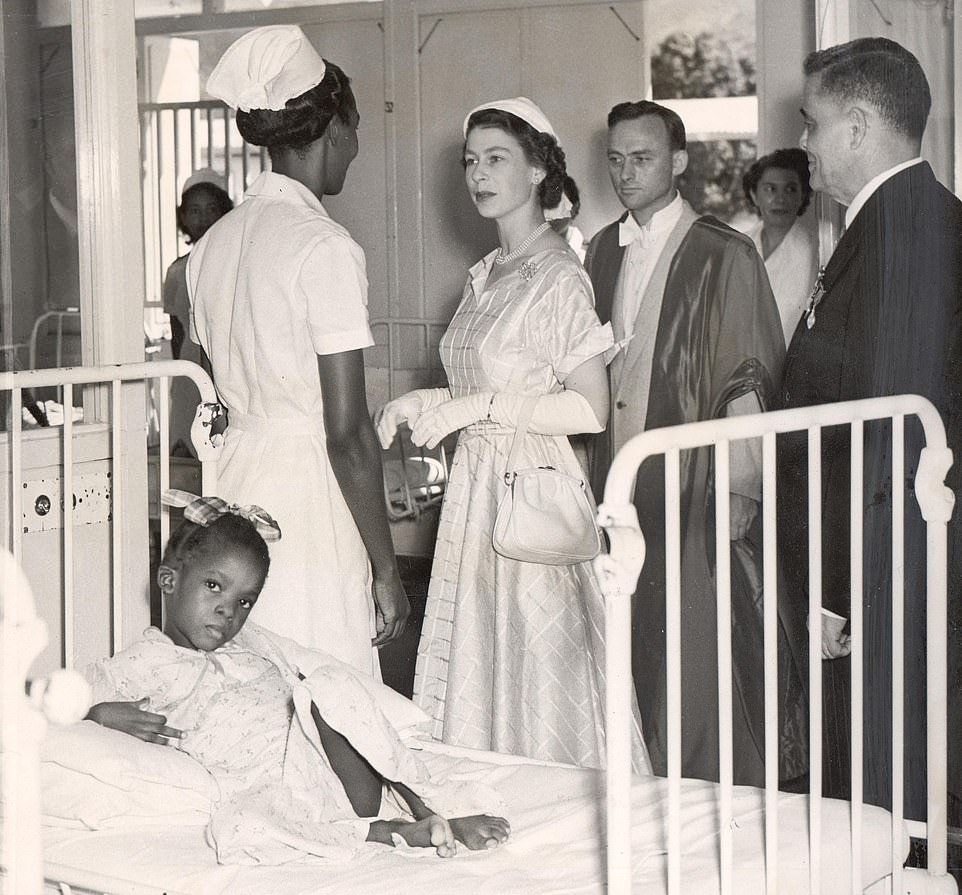 The Queen speaks to nurse Sister Francis on a visit to University Hospital, Kingston, Jamaica, on November 27, 1953

‘I’m delighted that a national monument acknowledging and celebrating the Windrush generation by Jamaican artist, Basil Watson, will be unveiled later this year in Waterloo Station in London.’

In contrast, the Queen’s tour de force marked a high point for the monarchy in the region.

Almost 11 years into their marriage, the duke and duchess are veterans of these royal tours; they are also older than the Queen and Philip were when they stepped foot in the Caribbean in 1953.

And while they have moved away from the glad-handing and waving that was so much a part of the monarch’s early overseas visits in favour of engagements featuring causes and charities, they have never encountered the vast crowds that awaited the Queen in Jamaica.

In the course of the months-long trip she opened seven parliaments, held 11 investitures, made four broadcasts, attended 223 receptions, banquets, balls and garden parties, laid 15 foundation stones, made 157 speeches and listened to another 276. God Save The Queen was sung 508 times.

She shook hands some 13,213 times, received 6,770 curtsies and accepted 468 gifts. The printed schedule of her many engagements ran to 130 small print pages. 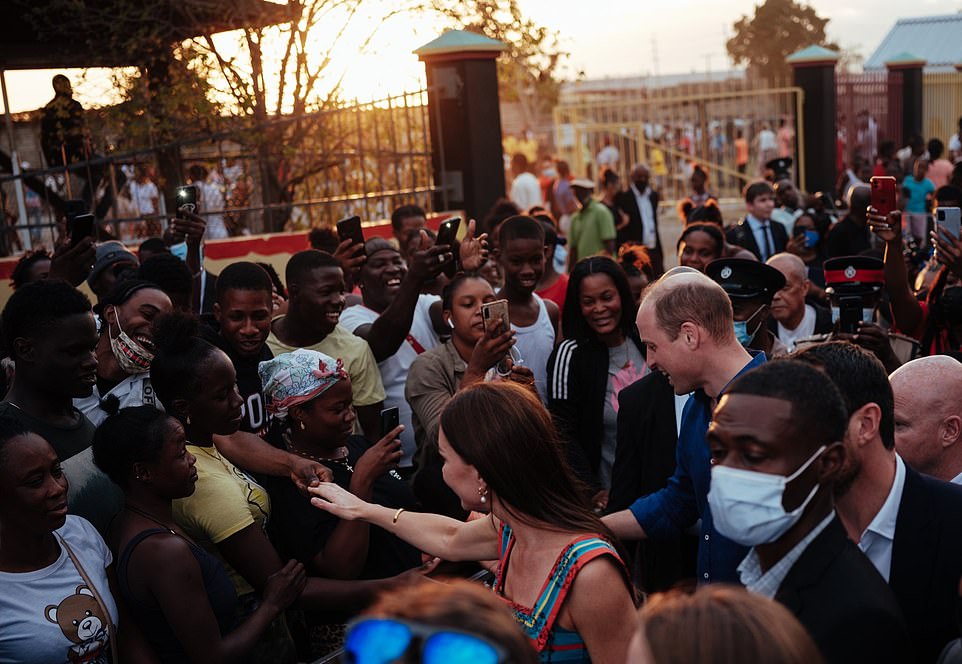 The Duke and Duchess of Cambridge stopped to greet crowds on their visit to Trench Town, Jamaica, on Tuesday 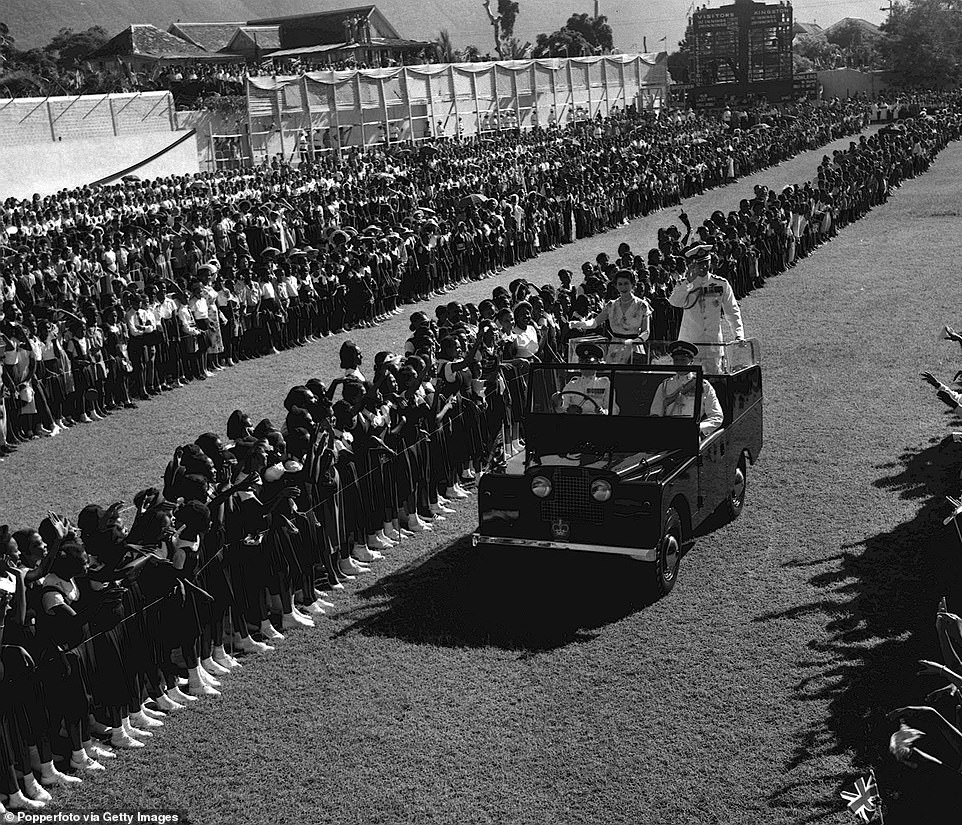 It was a far more orderly affair when the Queen and Duke of Edinburgh drove around Sabina Park and waved at 20,000 schoolchildren 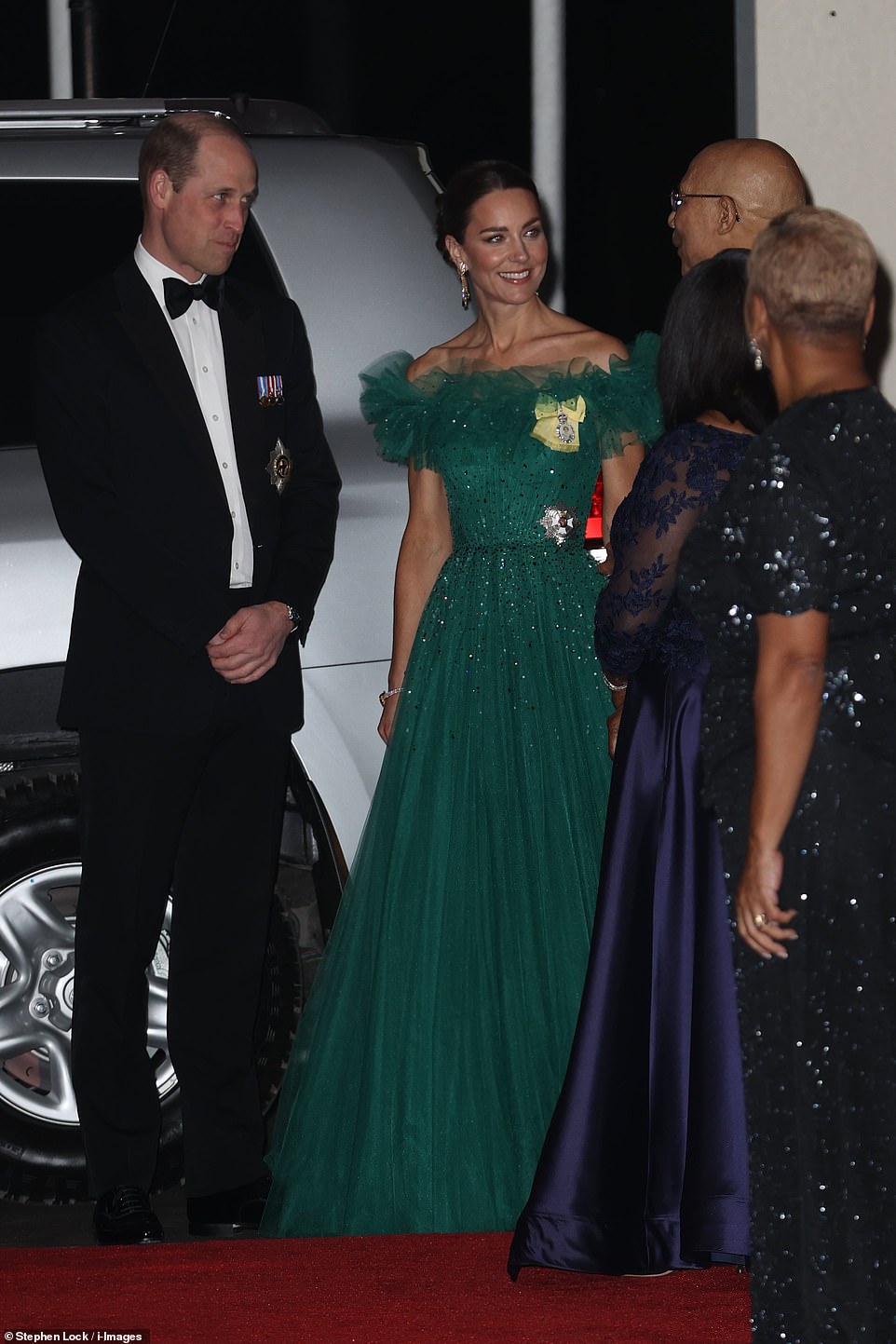 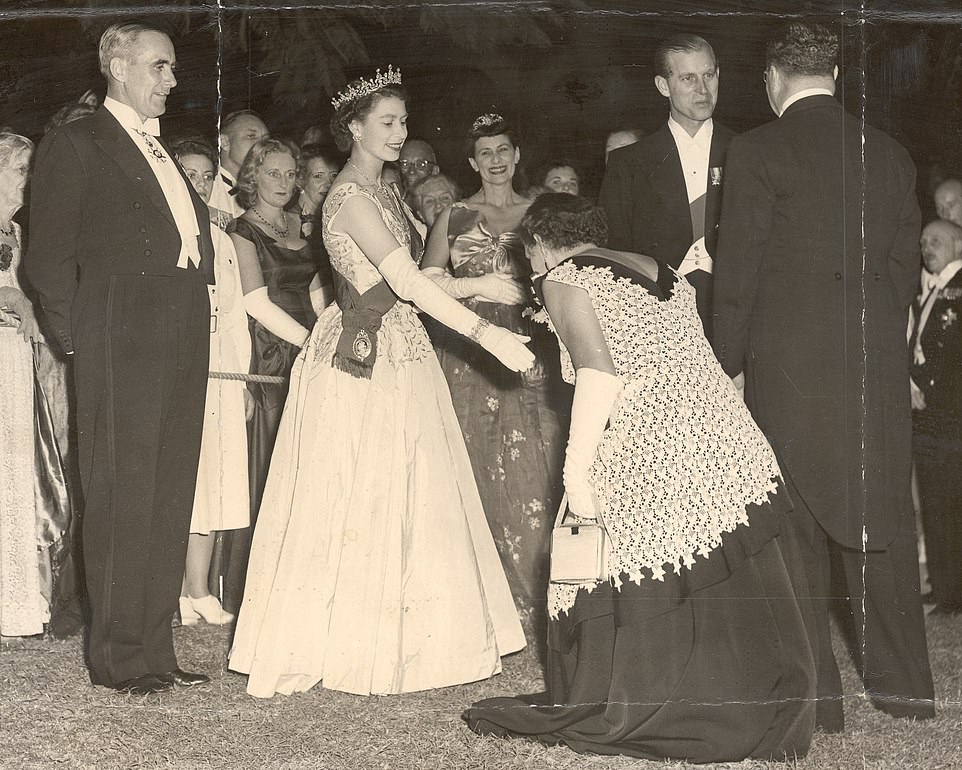 The Queen took along an entourage of 40, from ladies in waiting and private secretaries to maids and footmen, and the accompanying luggage was said to have weighed 12 tons.

The Queen’s trip was to take the young monarch round the world to the far-flung corners of the old empire, from Australia and New Zealand to Fiji, Tonga, the Cocos Islands, Ceylon, Aden, Uganda, Malta and Gibraltar.

Unlike Kate and William’s trip, Jamaica was merely a staging post for the Queen and Duke of Edinburgh.

For weeks the liner Gothic, its holds filled with a curious cargo of pianos, cars, wallpaper and brandy, was to be their home from home, taking them from the Caribbean through the Panama Canal and beyond to the Pacific.

By the time they were on the homeward leg, the royal couple were aboard the newly commissioned Britannia, which they joined at Tobruk in Libya.

Today, Kate and William will be boarding a flight to the Bahamas, the final stop on their royal tour, before heading home to Britain on Sunday.

It remains to be seen whether the Duke’s bold words will be enough to stem the shifting tide in the Caribbean. 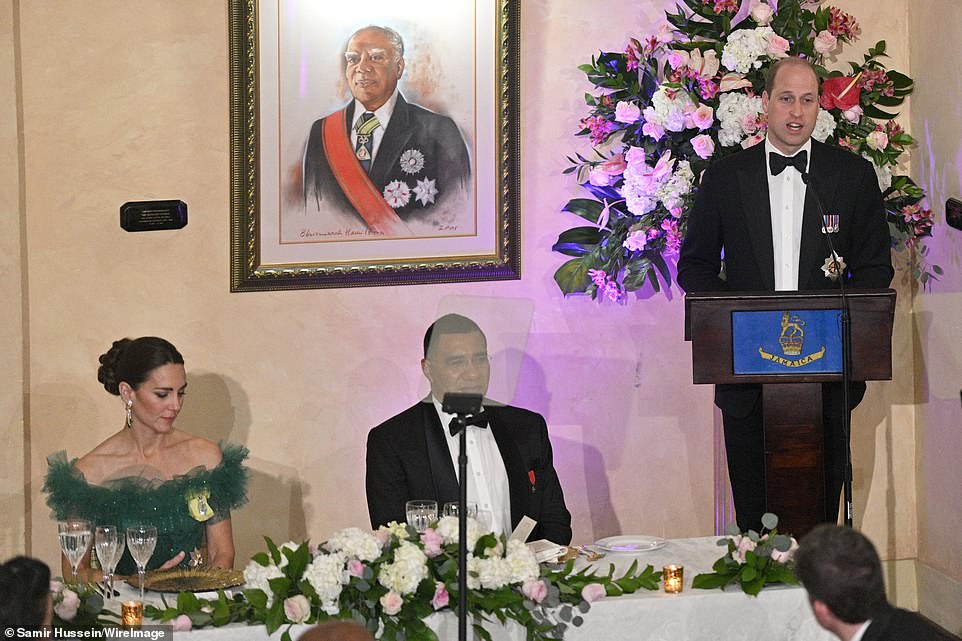 The Duke of Cambridge has faced the issue of Britain’s historic role in the slave trade head on, describing it as ‘abhorrent’ and a ‘stain on our history’ in a keynote speech alongside his wife Kate at a state dinner this evening 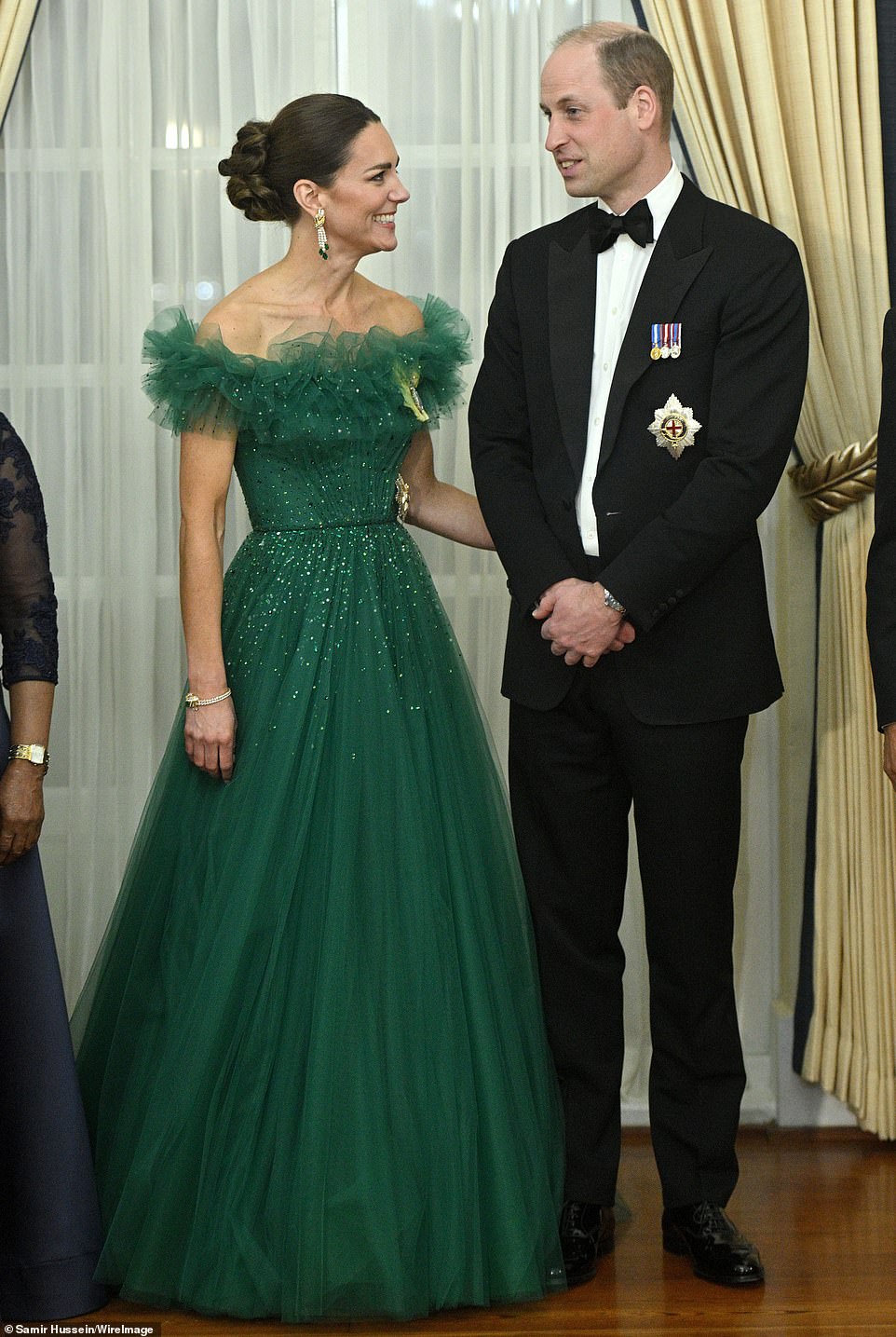 Kate’s earrings and bracelet comes from Her Majesty the Queen’s Emerald Tassel Parure, which consist of a matching set of earrings, a necklace, bracelet and a ring 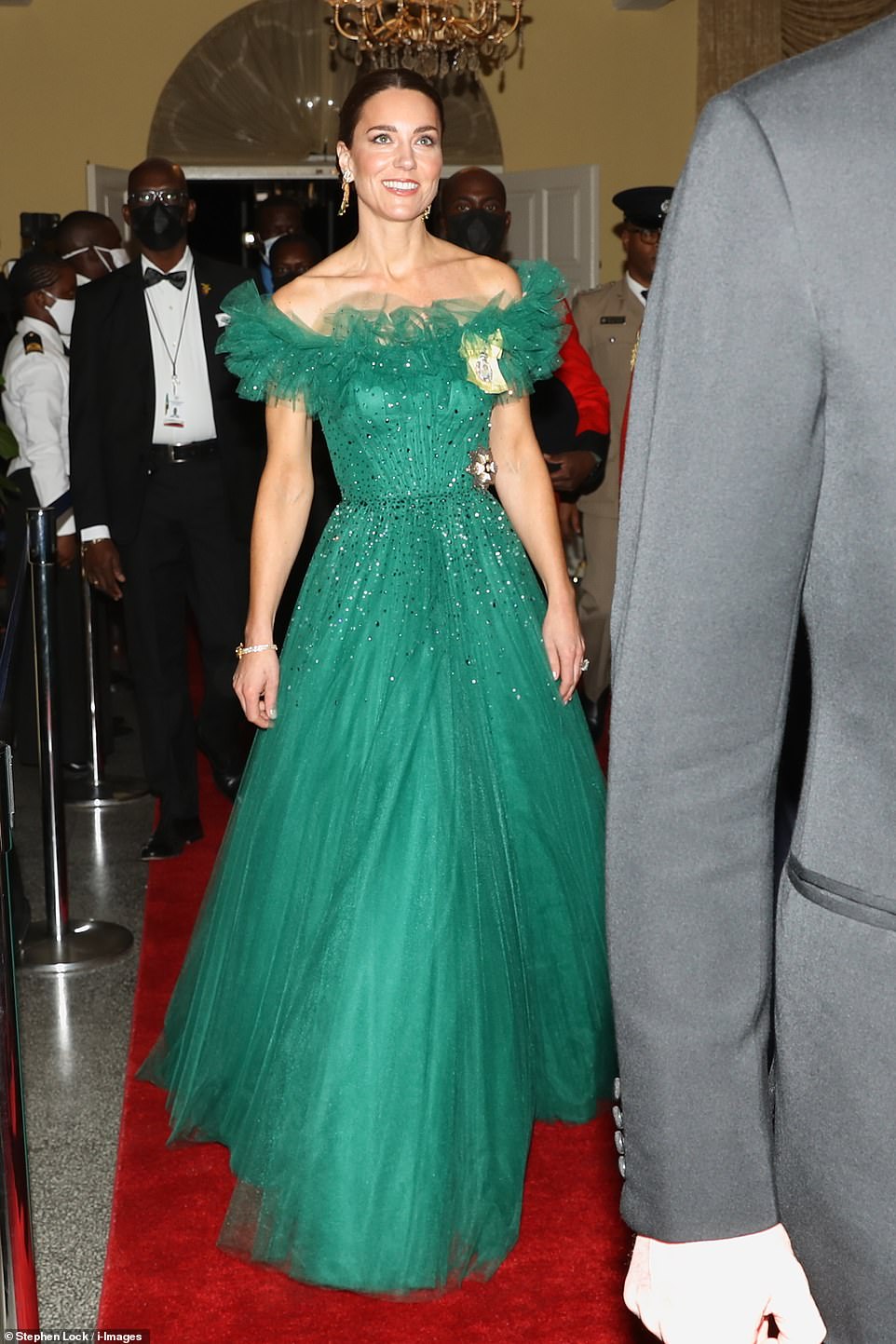