Disgraced detective Gary Jubelin has described William Tyrrell’s foster mum as a ‘very decent human being’ as she is named as a person of interest in the three-year-old’s disappearance.

Jubelin was once the head of the taskforce investigating the case when William vanished from his foster grandmother’s home in Kendall, on NSW’s mid north coast in 2014.

Speaking to 2GB, the former detective said the new developments in the investigation were ‘strange’ as police return to the site the little boy was last seen.

‘My impression is she (the foster mother) is a very decent human being,’ he said.

‘I certainly, whenever I’m dealing with victims and this is the detective in me, I’m always looking out for something suspicious and I’ve got to say I have not picked up any of that.’

William’s foster mother has become a person of interest in the case, however, the case has had hundreds of persons of interest.

Being a person of interest does not necessarily suggest William’s mother is a suspect and she has vehemently denied any involvement in his disappearance.

He admitted on Tuesday the early years of the investigation had wasted time chasing the wrong suspects.

Jubelin led the investigation into the missing toddler’s disappearance for five years until he resigned over misconduct allegations.

The ex-homicide detective was convicted of covertly recording four conversations with Paul Savage – who was wrongly singled out as a suspect in the case – and was fined $10,000. He later lost a subsequent appeal.

Commissioner Fuller attacked his former top detective’s approach to the case which he said had set back the current renewed search.

‘The investigation was looking at some persons of interest that were clearly not, and I think some time was wasted on that, and bushland is overgrown,’ Mr Fuller told 2GB.

‘But a new team on-board inherited, what was a bit of a mess, and have cleaned up that investigation.’

Mr Jubelin hit back at Mr Fuller’s criticism and insisted his bosses had approved of his every move while he was leading the search for William.

‘These reports were signed off on at assistant commissioner level and are retained by NSW Police.’

He added: ‘I own and take responsibility for the way I led the investigation. I hope the police who sat above me are prepared to do the same thing.

‘There were a lot of hard-working police on the investigation who were determined to find out what happened to William. I am sure they would not appreciate the public criticism from their commissioner.’

It comes as criminologist and former detective Dr Terry Goldsworthy say police are close to the ‘arrest stage’ of the investigation which has ramped up dramatically this week.

Police and forensic officers have been scouring the Kendall property and the bushland around it in recent days.

‘I think we’re moving now into the targeting and arrest stage, so we’re coming to the end of the investigation,’ Mr Goldsworthy told Sunrise on Thursday morning.

‘You can go back at any time and investigate new information such as additional crime scenes.’

Thursday marks the fourth day of a renewed search of the NSW mid-north coast town, as police say they will leave no stone unturned.

As diggers searched the garden of the home in Kendall where William’s foster grandmother lived and where he was staying when he vanished, NSW Police revealed they’d seized a car that once belonged to her.

The grey Mazda was seized from a home in Gymea in Sydney’s south under a coronial order last week, police said on Wednesday. 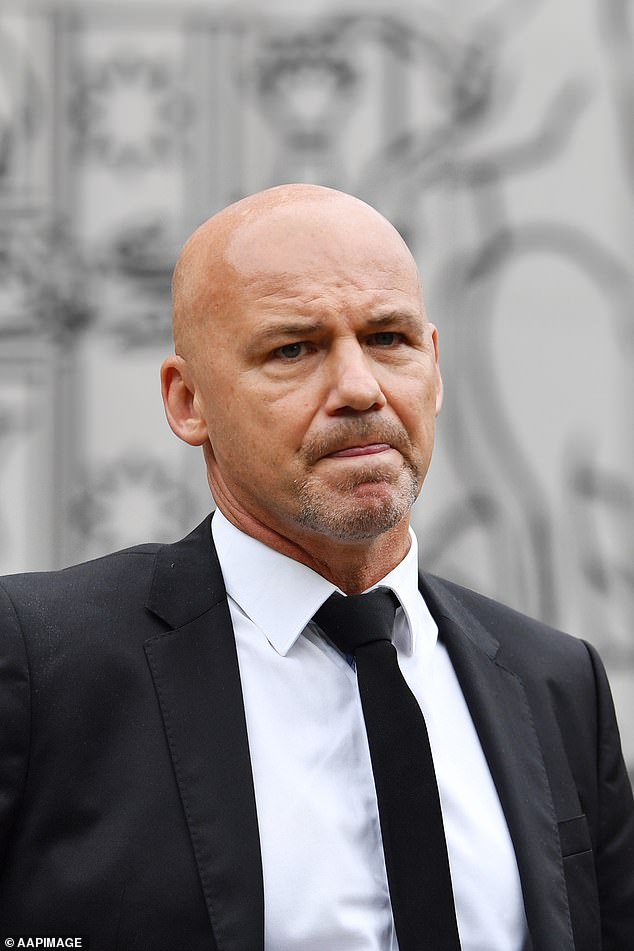 Gary Jubelin was the former lead detective on the case of William who vanished from his foster grandmother’s house in Kendall, NSW in 2014

‘The NSW Police will not stop until such time as we’ve investigated every possible lead,’ NSW Police Deputy Commissioner Malcolm Lanyon told reporters on Wednesday.

He vowed to ‘leave no stone unturned’ and praised investigators’ ‘dogged determination’ as they continued the search in Kendall, which could take weeks.

Some 30 to 40 people are helping with the search, including officers from the NSW Police and the Australian Federal Police, as well as Rural Fire Service volunteers.

Police on Wednesday turned their attention to an area of bushland about a kilometre from the house where William was last seen.

A mechanical digger was used to remove the topsoil, and officers were using ground-penetrating radar and 3D cameras to analyse the ground.

An expert hydrologist and archaeologist are also offering assistance on site.

There was a moment of excitement as police intensely scrutinised an item found on Wednesday afternoon – but it turned out to be nothing.

Police have meanwhile charged William’s foster parents with the assault of another child.

NSW Police allege they assaulted a different child at a home on Sydney’s upper north shore.

Homicide squad detectives received information about the alleged, unrelated assault as part of the task force’s ongoing investigations and the foster parents will appear in court next week.