Woman, 28, reveals she worked three jobs to fund travel to 22 countries with her son

A single mother who was determined to prove naysayers wrong has travelled to 22 different countries with her son.

Chelsea Ruby, 28, who lives between London and Marbella, was just 20 when she unexpectedly fell pregnant with her son Reginald, now seven.

She claims family members told her she was ‘too young’ and would never be able to travel now she was a mum.

Determined to prove that she hadn’t ruined her life, Chelsea worked three jobs and sold everything she owned to buy a one way flight to Thailand for herself and then two-year-old Reginald in 2015.

Chelsea Ruby, 28, who lives between London and Marbella, has travelled to 22 countries with her seven-year-old son Reginald (both pictured) 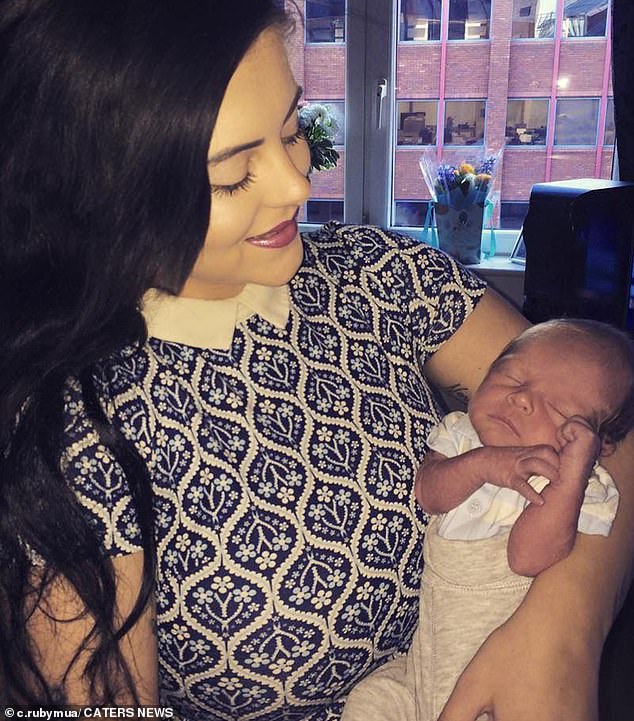 Chelsea claims family told her that she had ‘ruined’ her life after she unexpectedly fell pregnant at age 20. Pictured: Chelsea with Reginald as a baby in London 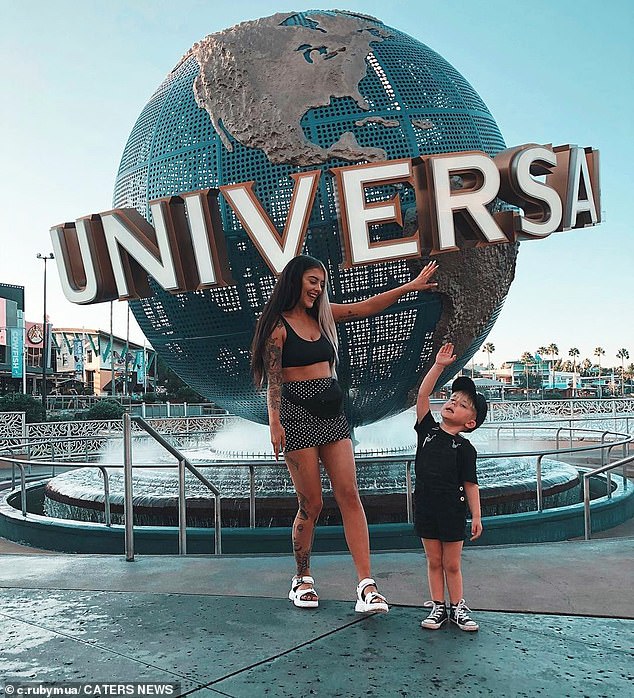 Chelsea said she decided to go travelling with Reginald after realising that she wasn’t compatible with his father. Pictured: In Florida

Chelsea who was aged 22 when their adventure began, said: ‘I fell pregnant unexpectedly. I had broken up with Reginald’s dad to go and do season in Zante and whilst I was there I had fainted and then found out was 10 weeks pregnant.

‘I then flew home and stayed with his dad for a year and half but realised we just weren’t compatible, we just had good friendship instead.

‘I decided that I wanted to take Reginald travelling so I sold everything I had and when he was two we flew to Thailand, and spent three years travelling around the world together.

‘We visited the Philippines, Cambodia, Thailand, Miami, Florida and then spent seven weeks in Europe and drove across the whole coast of southern Europe – from Spain to Italy, it was beautiful.

‘We have visited 22 countries together and he is only seven.

‘Europe was definitely our favourite, there is something about the freedom of driving through Monaco, Portofino and all of the beautiful places that you cant beat. 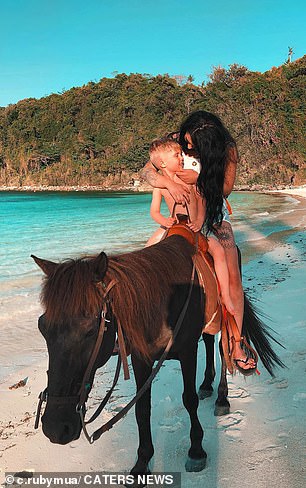 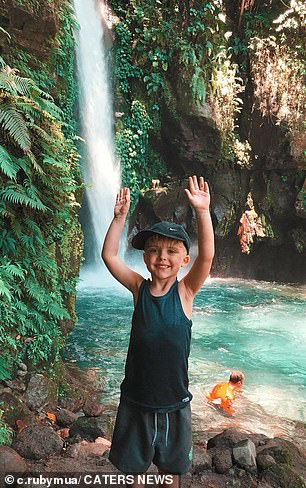 Chelsea said she sold everything and worked three jobs to fund their travel to countries including the Philippines (pictured), Cambodia and Thailand 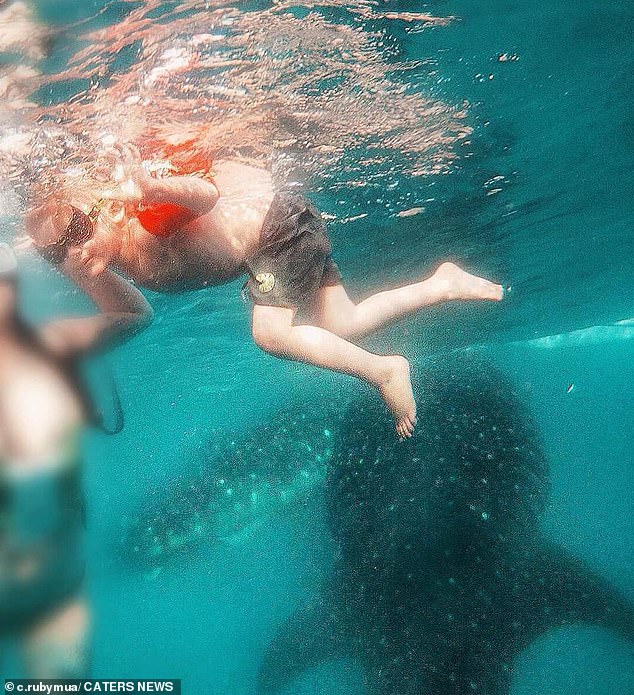 Chelsea said there are ‘risks in everything you do’ and they went travelling to prove everyone who thought she was ‘too young’ wrong. Pictured: In Oslob, Philippines

‘I wanted to prove I could do this when people said I was too young and it was too dangerous. I would rather die with elephants than crossing a road in London going to work every day. There are risks in anything you do so why not make the most of life.

‘Yes I sold everything before I left which meant we came home and had to go into temporary accommodation but I didn’t care because I had two years of memories and life is so short.

‘In his seven years I have gained more with him than what people would get in 70 years. I always complimented on the bond me and my son have. 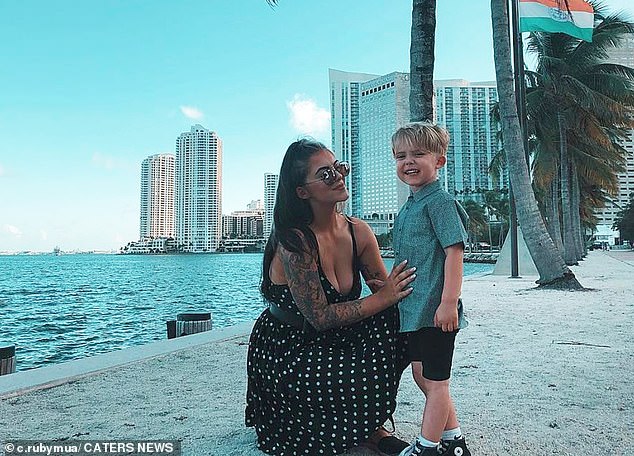 Chelsea said Reginald has gained more in his seven years than what some people would get in 70 years. Pictured: In Miami 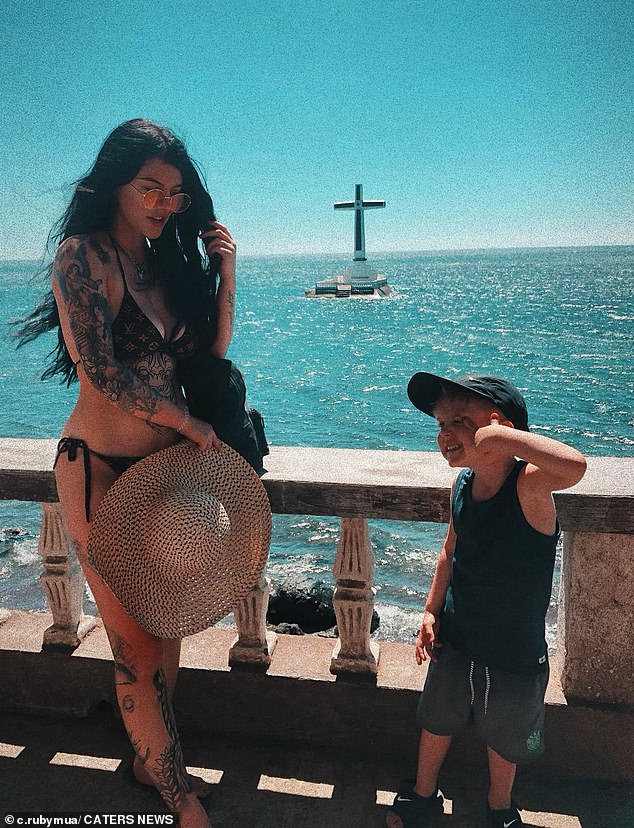 Chelsea claims she received ‘awful’ trolling on social media throughout their travels around the world. Pictured: In Liloan, Philippines 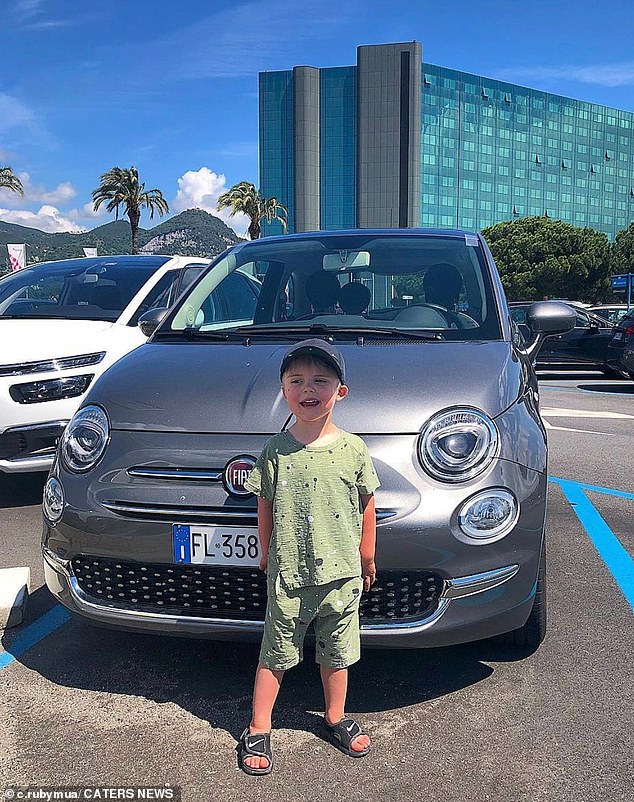 ‘When I was travelling, the trolling on social media I received was awful. When we were in the Philippines we stayed in high end hotel for the first week as it was very nerve wracking when we first landed.’

Chelsea said that some people have assumed her parents paid for her trips but insists it isn’t true.

She said: ‘I worked so hard to afford it, and that’s what I want people to realise that if I can do it anyone can. 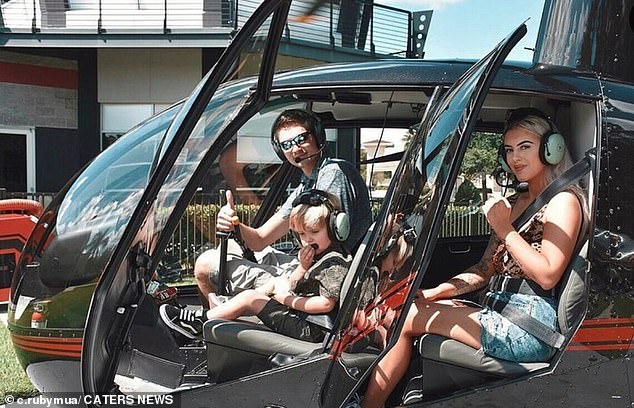 Chelsea revealed they spent just under seven weeks in Thailand and with flights and accommodation plus spending money it only cost £1500. Pictured: Orlando, Florida 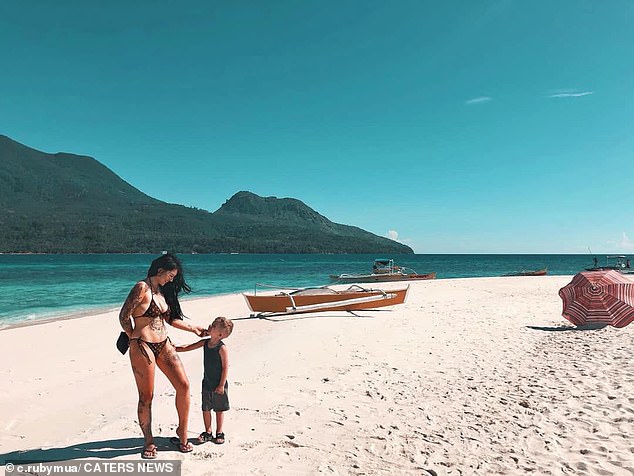 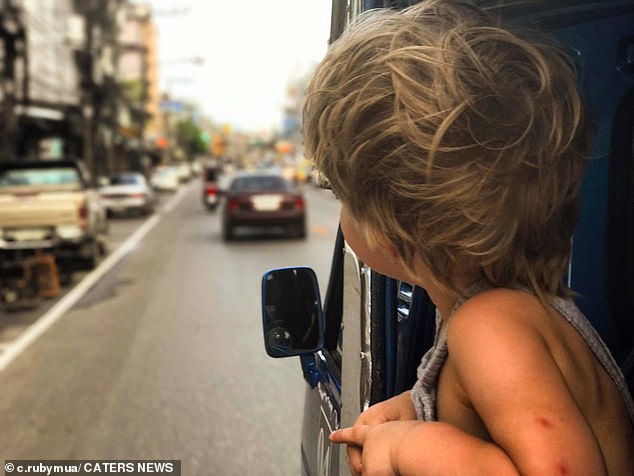 Chelsea said the food in Thailand (pictured) was cheap, they would eat local food as well as luxury meals

‘We stayed in hostels Monday to Friday and then lived as a king and queen at the weekends so we got to experience the culture and then had luxury as well.

‘We were in Thailand for just under seven weeks and with flights and accommodation plus spending money it only cost me £1500 in total.

‘I just feel that there is no excuse, we would eat local food as well as luxury food but even still, it is so cheap there.

‘If you want it you can work for it, you make these temporary sacrifices but you make the memories.’ 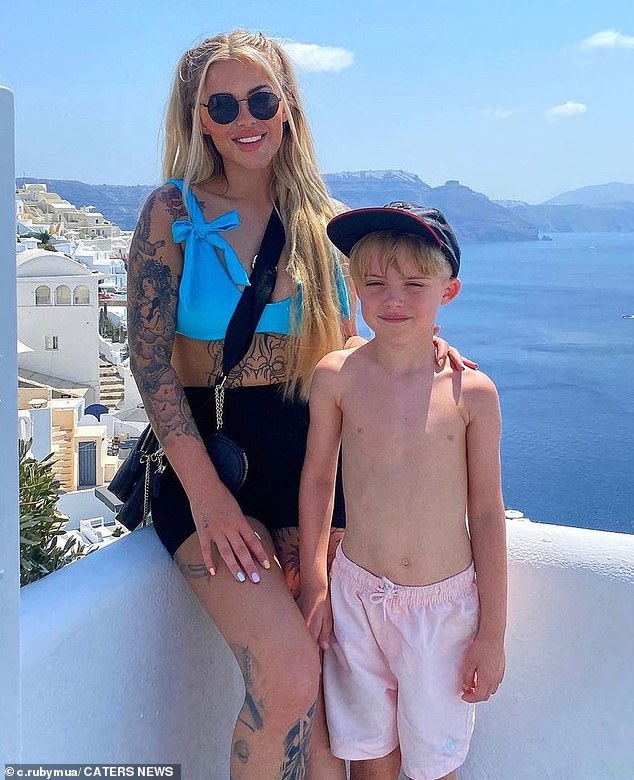 Chelsea said she ended up going down a ‘bad path’ after being given a flat from social services at age 17. Pictured: In Santorini, Greece 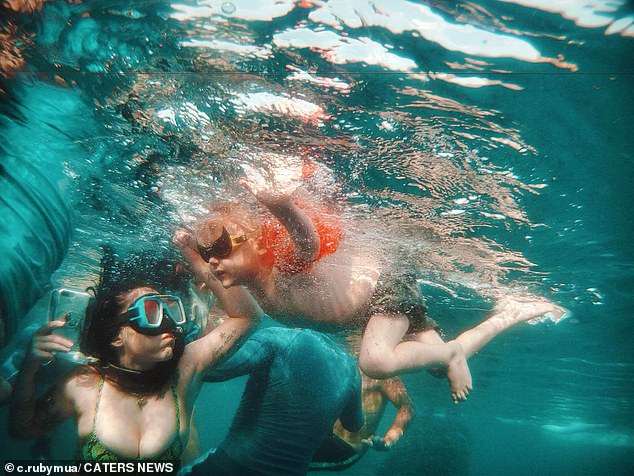 Chelsea, who is now a make up artist, said she worked in Kavos for three seasons before falling pregnant with her son 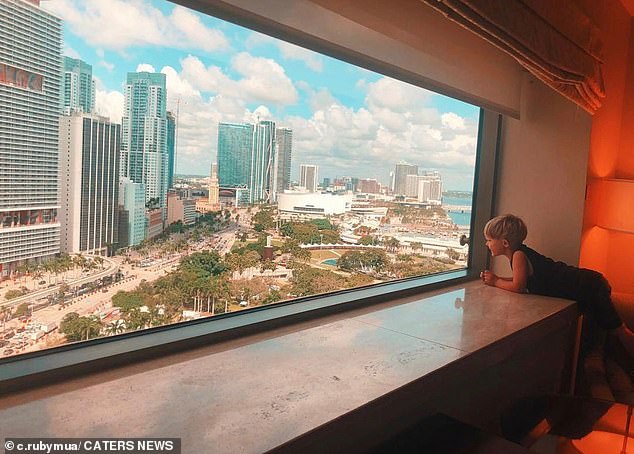 Chelsea claims travelling made her realise that memories mean more than handbags, shoes and nights out

Chelsea, who is now a celebrity make up artist, admits that her life was spiraling as a teenager.

Chelsea said: ‘When I turned 17 I left social care and got given a flat from social services but I ended up going down bad path.

‘I saw friend was working in Kavos and I wanted to do the same so I sold everything and went out there to work and ended up doing three seasons before I got pregnant.

‘I was quite materialistic when I was younger but when I went travelling it made me realise that moments meant more than handbags, shoes and nights out. It opened my eyes to how big and beautiful the world is. 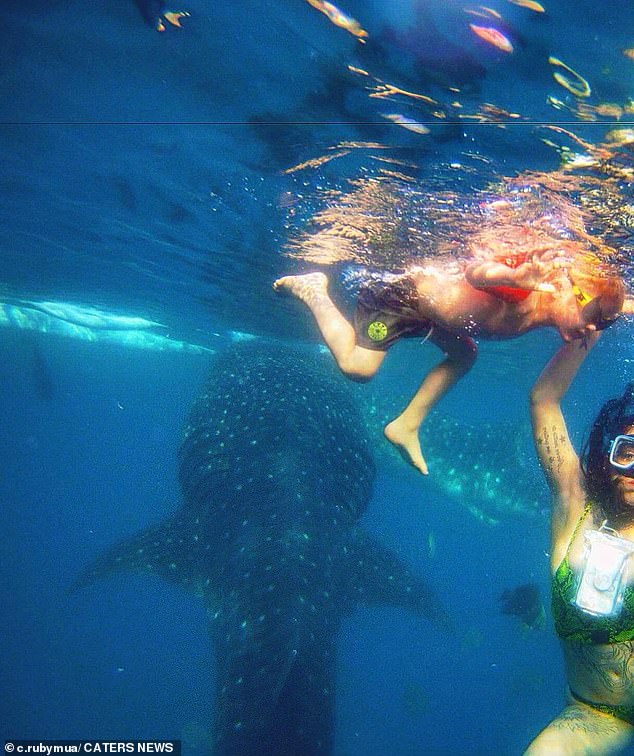 Chelsea said she hopes Reginald will continue travelling, and she hopes to gift him enough air miles to travel around the world at age 18 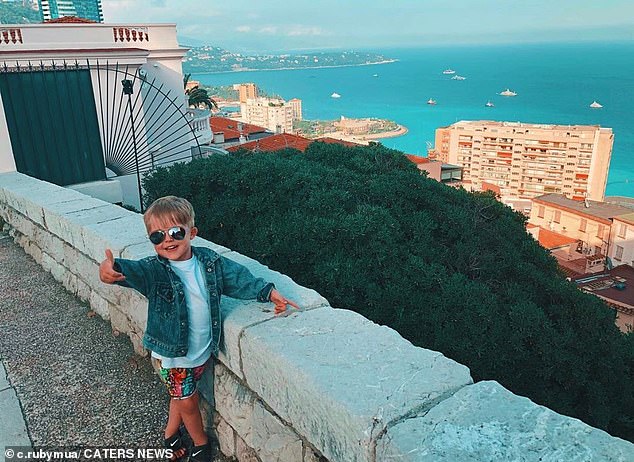 Chelsea said she wants to encourage Reginald to go find himself and not to be stuck to one friendship group. In Monaco 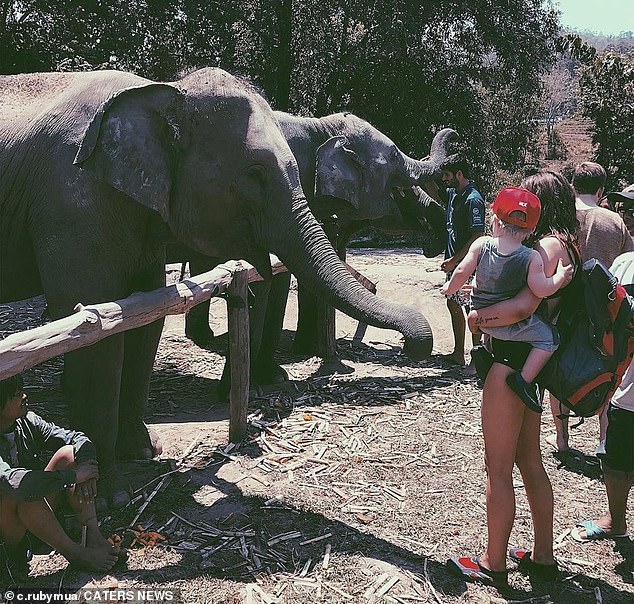 Chelsea said she still has many places to visit with her son, and their two-and-a-half years exploring the world has given her a ‘life time of happiness’. Pictured: In Chiang Rai, Thailand

‘It made me realise that smaller less expensive things are most precious, and travelling with my son helped me find myself.

‘I really hope Reginald will continue to travel. For his 18th would love to get him enough air miles to travel around the world, I want to encourage him to go and find himself, and don’t want him stuck in one friendship group.

‘I learnt that the world is your oyster and feel like I became so wise from travelling so I want him to do the same.

‘Our travelling together definitely hasn’t ended, we have still go to so many places to visit but already, those two-and-a-half years have given me a life time of happiness.’ 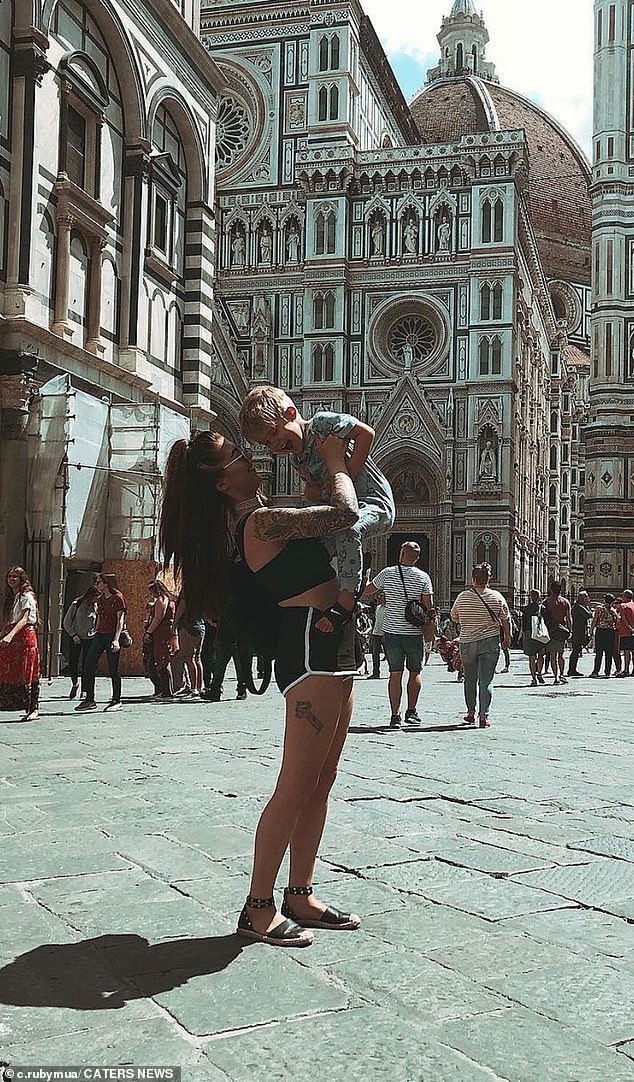 Reginald was home-schooled until he was six years old after returning from their travels to 22 countries. Pictured: In Florence, Italy 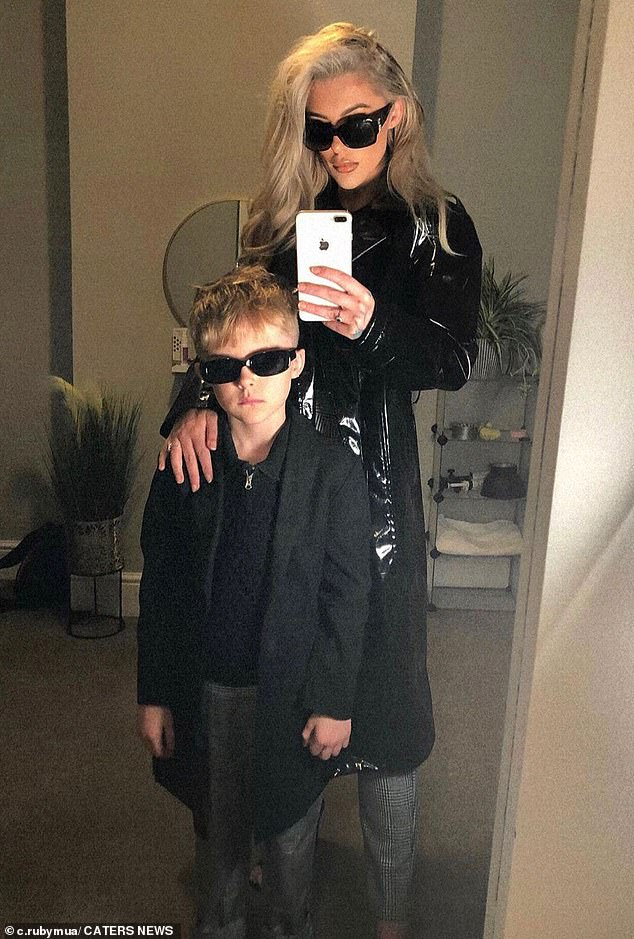 When Chelsea and Reginald returned from their travels, Reginald was home-schooled until he was six years old by choice as Chelsea felt that he didn’t need to be in school until then.

Chelsea added: ‘I liked the freedom of showing him places myself and not having to comply to school regulations.

‘When he started he wasn’t even behind.

‘He started in October last year and I think he has really taken in the experiences he formed at such a young age.

‘Reginald was progressing so much independently already, I didn’t want him to be corrupted by school, and if I had it my way he wouldn’t be at school at all, I think he needs to be shown life experiences such as travelling, how to deal with debt, credit ratings instead.

‘I know I am very different with my mindset, it was just the social aspect of school which drew me to letting him go.’