Woman, 31, reveals people ask her husband, 63, if he is their baby’s GRANDPA

A California woman said that people often ask her 63-year-old husband if their baby daughter is his grandchild.

However Emma Thomas, 31, said that her significant other John Planas, whom she married in April, is like her ‘human Valium’.

The business owner and mom-of-two met The Philippines-native John in 2017 when she was coming out of an abusive relationship and his kind, consoling nature eventually won her over. 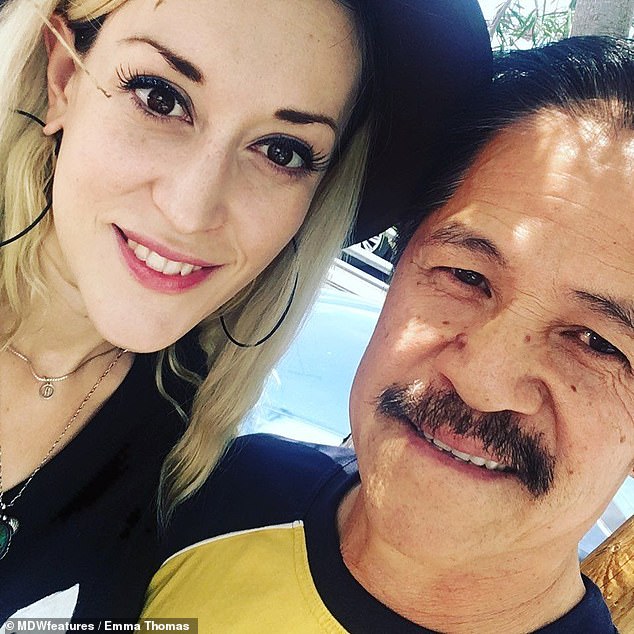 Age gap: The California-based woman married John in April 2019 after falling head over heels in 2017 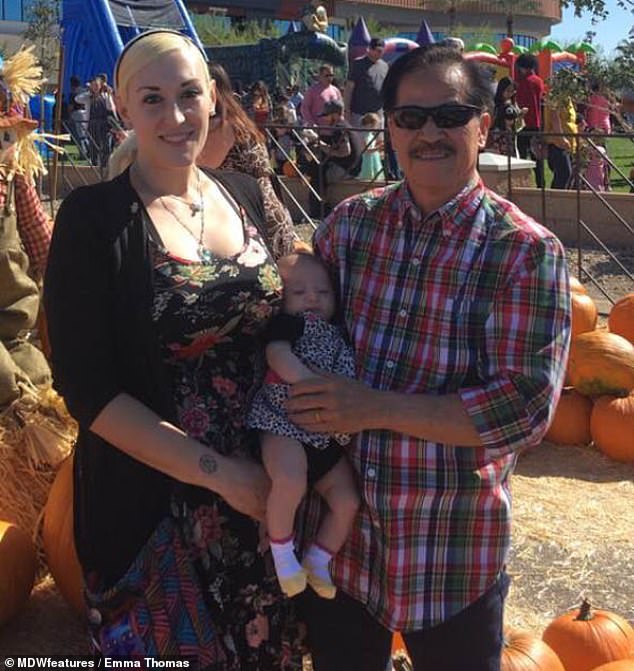 Critics: Emma said she initially resisted her feelings towards John as she was scared what people would say about the 32-year age gap

Emma said she felt an instant attraction to him when she met him by chance, and even though he gave her his number to call him, she decided not to pursue him as she was afraid of what people would think due to their age gap.

However, a few months later, she was with a friend who wanted to buy a packet of cigarettes, so they went into a casino that was nearby. As she went inside, she bumped into John again by chance and decided not to let the moment go by.

They began dating and fell in love quickly and one day she invited him to a punk rock band concert.

The main singer, who knew Emma, approached her and invited her to tour with the band so they could be together, but she decided against it as she felt a connection with John.

From that day their relationship became serious and in November 2018, they both spontaneously proposed to each other, using rubber rings from a car as engagement rings.

They got married on April 1, 2019, and have since welcomed their first child together, Anneliese, who is now three months old. 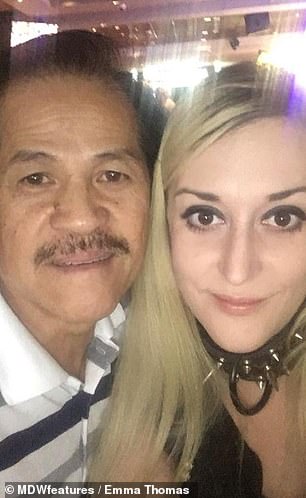 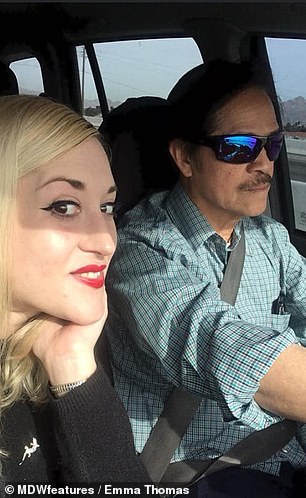 Fate: Emma, pictured, met John by chance and didn’t call him until she ran into him again some months later

She said: ‘It’s very funny how we met, when I met him, I was going through a really hard time, so there would be times when I would just leave the house because I was so upset.

‘That day I was running away from the house, I was crying when John saw me and asked if I was OK, I just replied, “My baby’s dad is terrible to me” and he didn’t have a phone on him, so I went with him to find a phone.

‘I just started crushing on him; this guy is adorable, he’s so sweet just randomly saving me out of nowhere. Then I was thinking, why did I get into his car? Grief does weird things to you.

‘I ended up at his auto shop and found that he was a legitimately good guy. He let me borrow his phone and I called my mom to pick me up.

‘He gave me his number and I was thinking I want to see this guy again, but my brain was telling me, “No, you don’t because what are people going to think?” He’s older.

‘We don’t want everyone judging you; I’m already judged because I’m a weirdo punk rocker and I had a kid out of wedlock.

‘That’s the reason why I didn’t pursue him at first but then I ran into him at a popular casino and I just thought it was really random because my best friend went in there to buy cigarettes and that’s when we ran into each other. I told him I would be calling him as I still had his number.

‘He calms me down, I call him my human Valium; he’s so calm, cool, collected. When we started getting serious, I took him to a punk rock band concert. 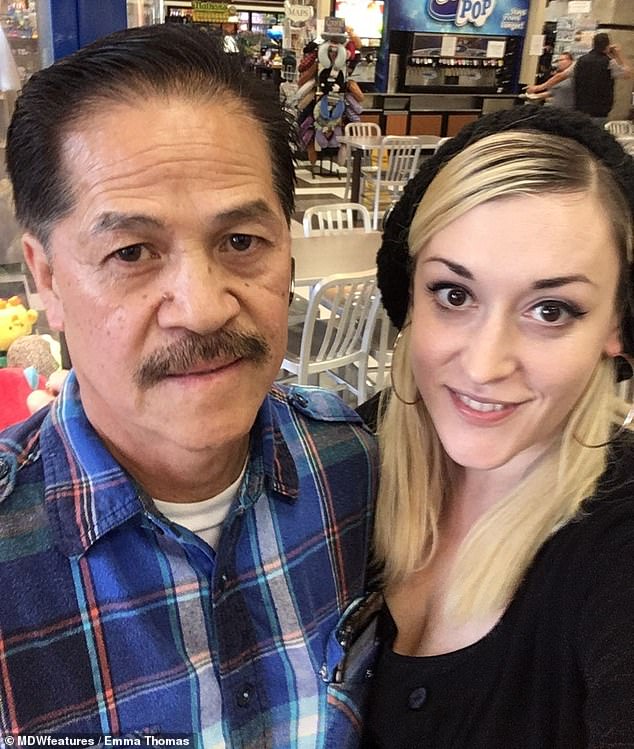 Families: Both Emma and John’s families originally gave them a hard time about their relationship but now he dad is good friends with John 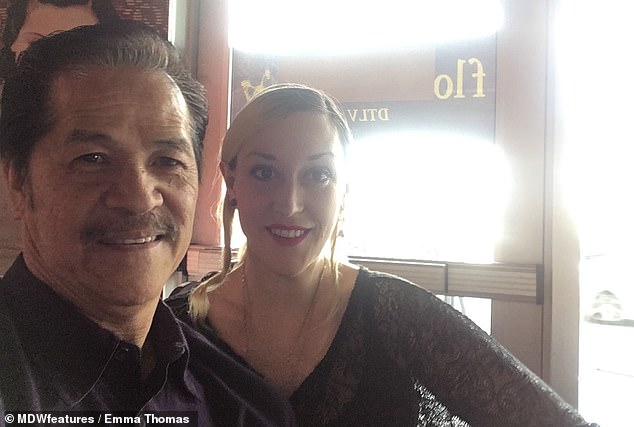 ‘Human Valium’: The business owner said that her husband is ‘calm, cool and collected’

‘I actually knew the singer; all the girls fawn over him online constantly. He recognized me and invited me to tour with him, I could have left John there and then to travel the world with him, but I said no, I’m with John. He’s my man.

‘I was attracted to him when I first saw him; I loved his slicked back hair, he looked old school and felt that instant attraction.’

Emma says that their relationship faced some challenges in the beginning but soon they won over their families and now they all love him.

‘His sons at first were really skeptical and they thought I wasn’t really there for him and trying to use him for something,’ she said.

‘They kept saying, “You know we don’t have money; you know there’s no money” and they seemed very harsh and critical of me; they were grilling me, giving me the third degree.

‘Also, my dad was upset by our relationship for a while but now he loves John so much. They’re good friends now. My whole family love him.

‘When they found out I was pregnant with our first child; John’s family threw me a baby shower – and I’ve never had one before until now.

‘I don’t ever want John’s sons to call me their mom, just their big sister as there isn’t much of an age gap between us. 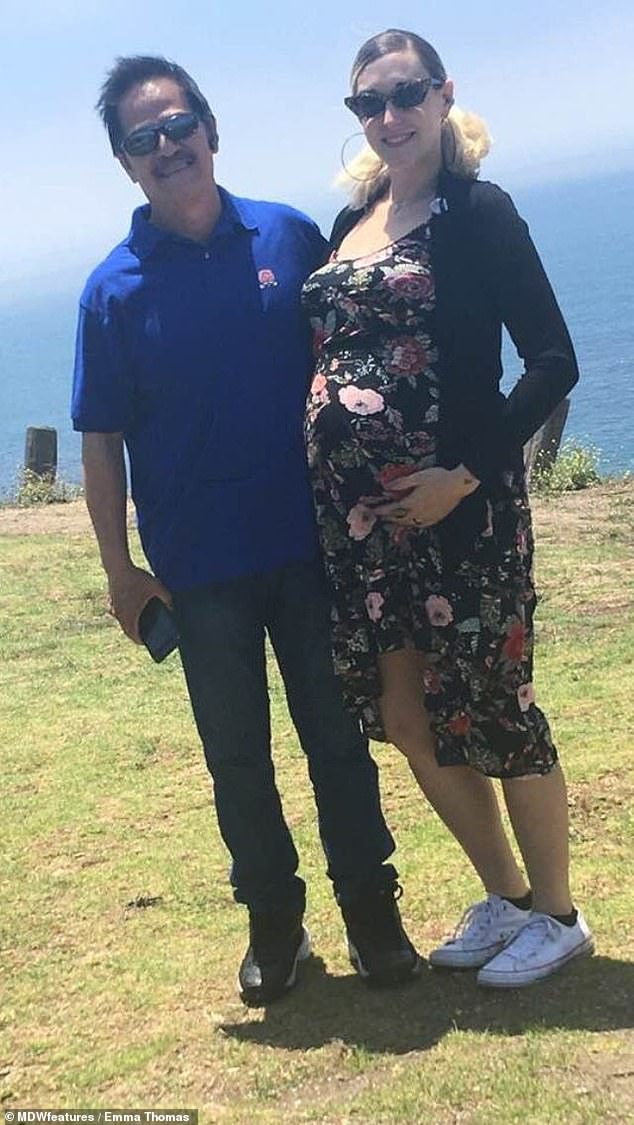 Babies: Emma, pictured while pregnant with her daughter Anneliese said she hopes to have another child with John one day 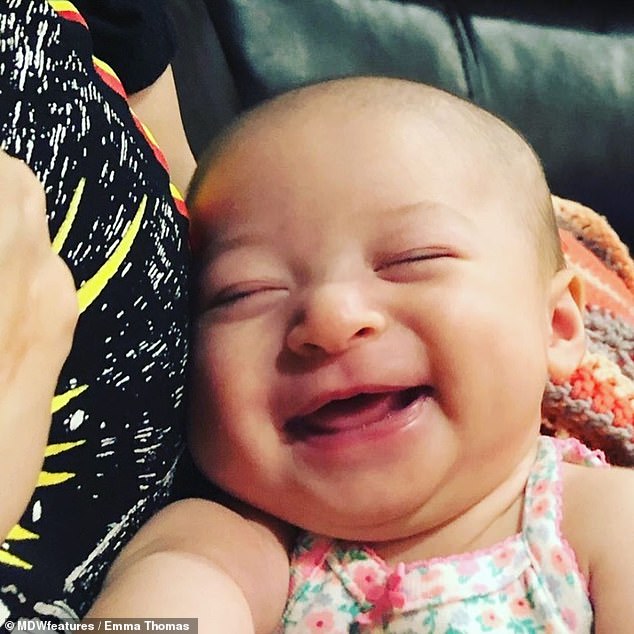 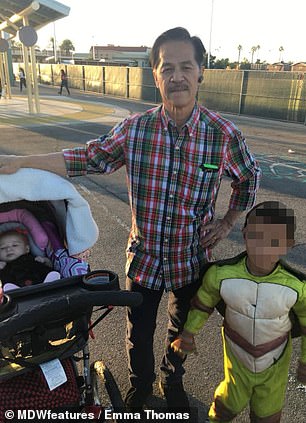 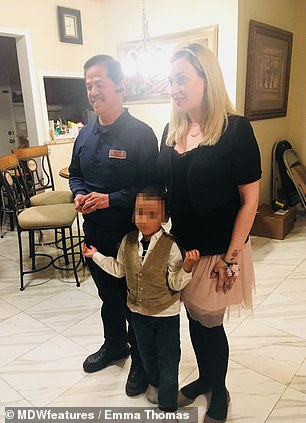 Child: Emma has another son, pictured with John left and right, from a previous relationship

‘Maybe if we were ever financially set, I would love to have another baby with him. I actually want to move to the Philippines with John one day but I can’t right now as my son’s dad lives here, but if we get permission, I would move. 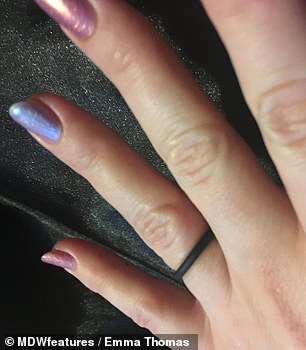 Rings: When the couple casually got engaged, they used rubber rings from their car, pictured

‘Our proposal happened out of the blue; we just said to each other, “So shall we get married?”- it was very casual.

‘We used rubber rings from a car as engagement rings.

‘People instantly ask if John’s my father or if we’re with our baby daughter, they ask if she is his grandchild.

‘Sometimes if he doesn’t want any complications, he just says yes to avoid the discussion, but I always want to explain.

‘You need to be yourself. I also advocate for people from the LGBTQ+ community, to give them the confidence to come out.’