Woman explains the reasons she does not want children

A woman has gone viral online after sharing all the reasons she does not want to have a baby – from ‘rips’ during birth to fearing she would dislike her child.

Maria, 21, from Sydney, shared her list on TikTok in a lengthy video, starting with the fact that she just does not want a baby.

Amongst her list of reasons for not wanting children included feeling she didn’t want her body to ‘grow and change’, while she also said ‘scary things’ could happen to a woman during pregnancy.

Other users flooded her video with comments of support, with one person writing: ‘There’s literally not a single positive aspect to it.’

Maria, 21, from Sydney, has gone viral online after sharing all the reasons she does not want to have a baby – from ‘rips’ during birth to fearing she would dislike her child

Starting her video, Maria wrote: ‘Reasons I will not be having children. Number one, I don’t want to.

She added: ‘Number three, what if I don’t like them? Kids are going to grow up, and have their own thoughts and opinions. What if they’re really annoying and I actually hate my child. 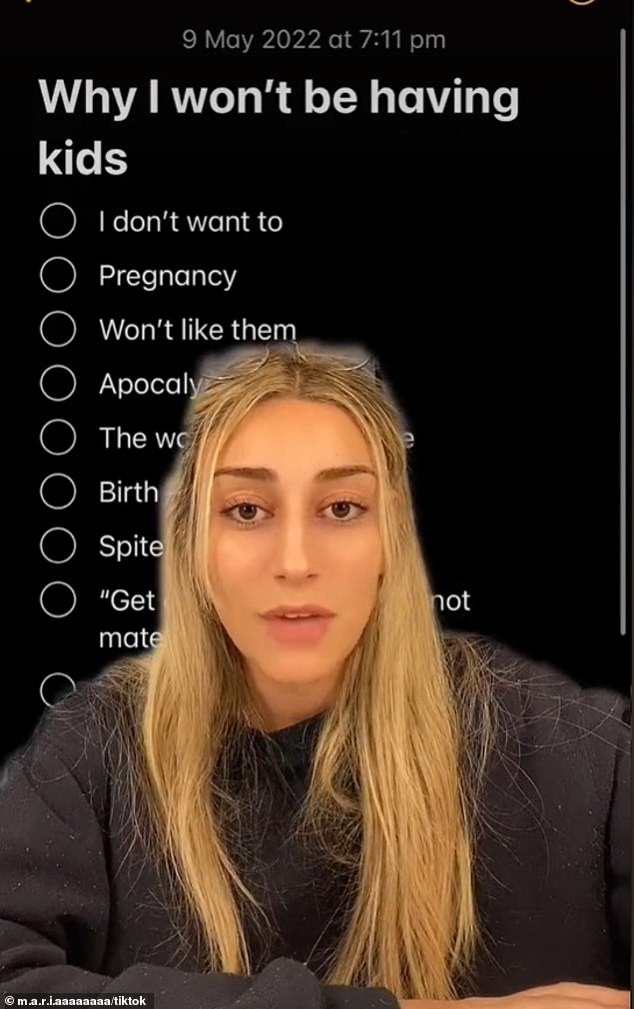 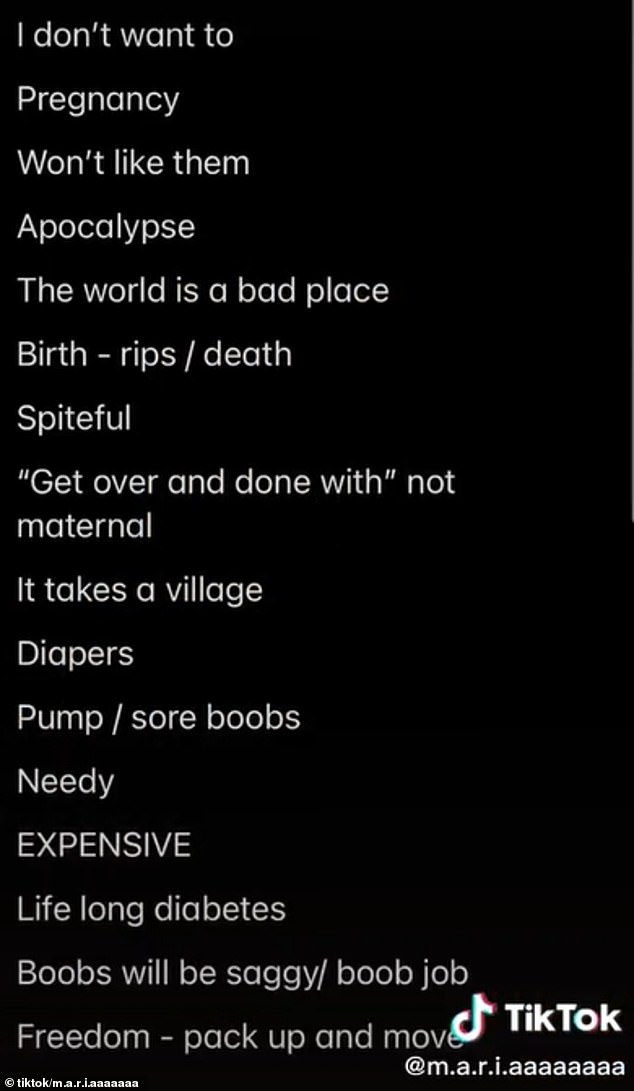 Why the ideal age to give birth is 25: Women who have children in their mid-twenties live the longest, study suggests

Women who have children in their mid-twenties live the longest, a study suggests.

Prior research linked becoming a mother in their thirties with longevity, with experts theorising that childbirth might speed up the ageing process.

But now researchers from the University of Seoul in South Korea have claimed the sweet spot may be between 24 or 25 after studying 4,000 women.

They found those who had a baby before or after then had an up to 5 per cent higher risk of dying from any cause within 18 years.

The trend was ‘U’ shaped, meaning the risk was greater the further away from the age of 24 or 25 they were when they gave birth.

Very young mothers tend to be from deprived areas which puts them at higher risk of a host of mental and physical illnesses, the researchers said.

They speculated that the toll of childrearing and childbirth may be tougher for older mothers.

Much like South Korea, both the UK and US have seen the age at which women have their first child steadily increase in recent decades.

‘What if they become an alpha male with  a podcast. What do I do then?’

Expanding on her list, she revealed she was nervous about the ‘threat of a future apocalypse.’

She said she was already looking after herself, her parents and siblings.

Maria continued with another reason, saying: ‘The world is in a bad place. Realistically, we could be left without food in the next 25 years. Do I want to worry about myself a child? No.’

Meanwhile she also pointed out she didn’t want ‘saggy’ breasts, and feared other changes to her body during birth, saying: ‘I don’t want to give birth.

‘Birth is a scary thing, women die during birth.

‘You rip down to your a**ehole and then doctors stitch you up and add an extra stitch for your husband so he can have pleasure.

And she referenced her character traits, saying that she is spiteful and not at all maternal.

She said she ‘wouldn’t change her mind.’

She revealed that when she was younger she had said she wanted a baby early in order to ‘get it over and done with.’

Maria does not want her own children because she said they are needy, which she explained she already is and does not need someone else like her in her life.

Additionally, she explained that it is too expensive for her to raise a child and she cannot face the costs they incur.

After her TikTok video went viral online, many commentators flooded her with support.

One person said: ‘Pregnancy sounds like biggest nightmare on earth’.

Meanwhile another added ‘Not to scare you off anymore but I became allergic to cats, developed eczema and am now lactose intolerant from pregnancy.’ 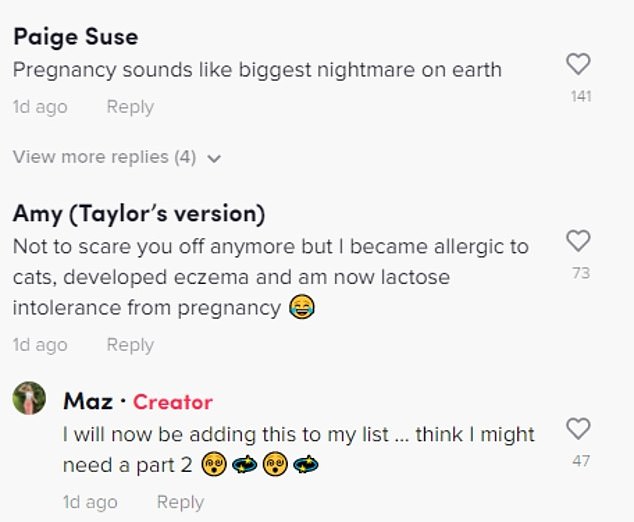 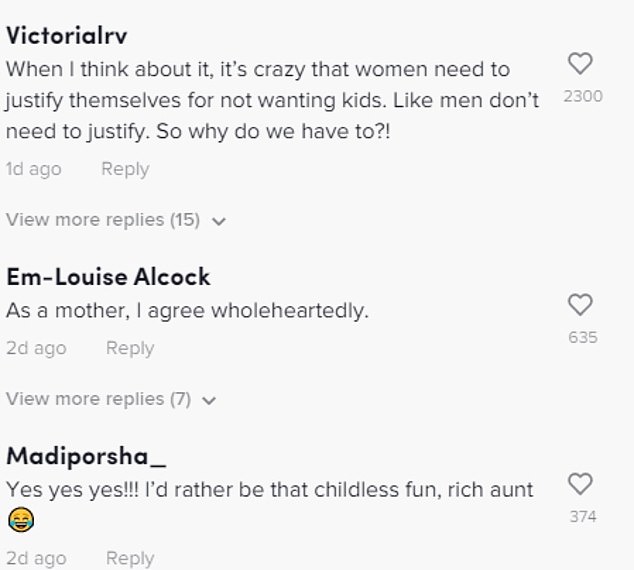 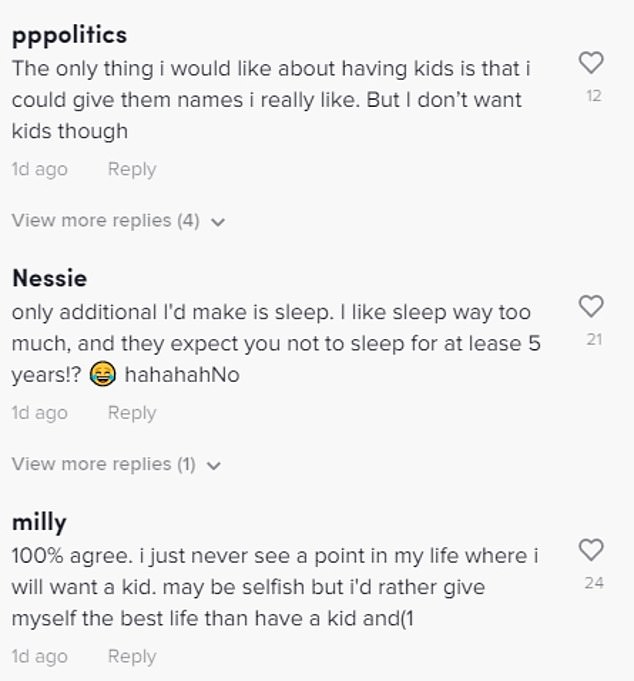 Maria attracted a swathe of commenters in support of her on her video, with many praising her for her honest take