Do YOU ever eat your desk fruit? Woman shares a snap of the apple and banana she takes to and from the office EVERY DAY – and strikes a chord with fellow workers

If you’re reading this sat at your desk, take a quick look to see if you have a solitary piece of fruit that has been there all week untouched.

If yes, then don’t feel guilty, because you’re not alone. One office worker’s snap of her neglected ‘work fruit’ struck such a chord with fellow desk hounds that her tweet has gone viral.

On a photo of her uneaten apple and a banana, Irish worker Eimear joked: ‘Time to bring these guys back home again. They love the little spin into the office bless em.’

It has received nearly 9,000 likes, and other employees have swapped hilarious tales of their untouched work fruit that they bring into the office before taking home every day.

Irish office worker Eimear snapped a photo of her work apple and banana which she took into work without eating, and it struck a chord with dozens of other desk slaves, receiving nearly 9,000 likes

One office worker said they were left shocked when a colleague of theirs actually ate their ‘work apple’.

Twitter user David commented: ‘I was genuinely shocked! I nearly choked on my crisps…’

Several people joked that they kept pieces of fruit as ‘pets’ that they took on outings to and from the office everyday.

Meanwhile others pointed out that accompanying chocolate bars never made it back home at the end of the day, as they would always be eaten. 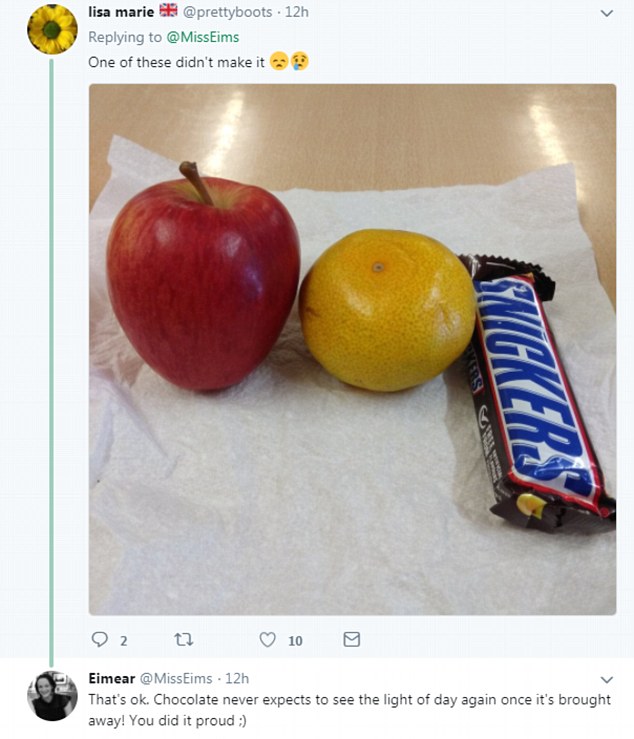 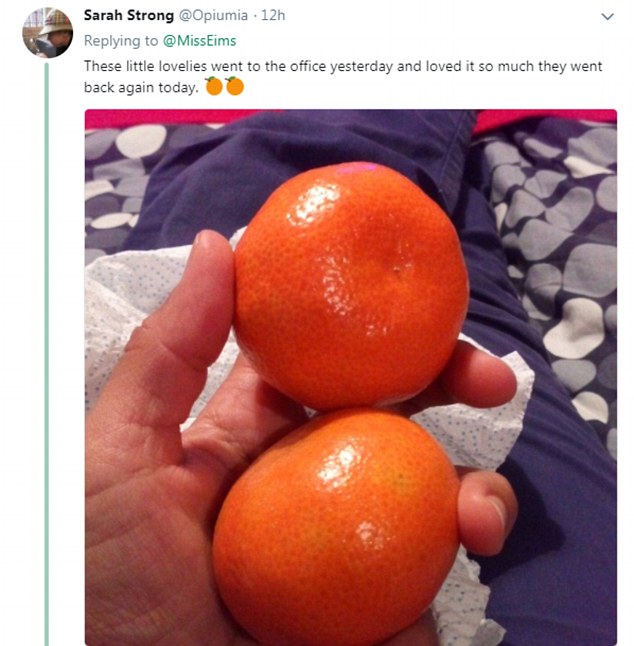 Dozens of office workers shared their personal tales of taking desk fruit into the office without eating it, referring to them as pets that they take on outings. Many said they didn’t have the same trouble with chocolate bars

One Twitter user, Elizabeth, said she always had an orange on her desk that was now serving as ‘decoration’ as it was unlikely she would ever actually eat it.A

Mother BeckiJ said that is was not only ‘back to school time’ for her children, but also for the apples and bananas she would send with them, as they always returned ‘safe’ at 3.30pm.

A few confessed they would leave their work fruit on their desks overnight when they had forgotten to take them home, with one worrying if they would be ‘ok on their own’.

Another said that while the fruit had been left behind in the office, the packet of Minstrels they have taken in were scoffed.