A woman has revealed how she believes her late best friend communicated with her twice from beyond the grave in an eerie story that’s difficult to explain away with logic.

Laura, from Devon, spoke to BBC Radio 4 podcast Uncanny about how she saw a vision of her friend Anna in a park, moments before learning she had lost her battle with cancer.

Six years later, Laura met a medium who repeated Anna’s dying words despite never having met either of the two women previously.

‘Even though it’s my story and it happened to me. I find it such an odd story,’ Laura admitted.

Unexplained: Laura spoke to BBC Radio 4 podcast Uncanny about how she saw a vision of her friend Anna in a park, moments before learning she had lost her cancer battle. Stock image

Laura, now in her early 40s, met Anna in the early Nineties after leaving home at the age of ’15 or 16′. She moved into a shared house with strangers, including Anna, who was then in her 20s. The pair became best friends.

‘Anna didn’t look like anybody else,’ Laura continued. ‘She was very Rubenesque and she had clouds of red hair that didn’t grow down, it grew out. It seemed to defy gravity. She generally had a cigarette on the go and great big glasses.

‘She was the best person I had ever met at that point of my life. She was someone who would always look out for me. Make sure that the worst didn’t happen to me.’

Three years after they met, Anna, then in her early 30s and already a cancer survivor, found a lump. ‘She had it checked out and the cancer was back,’ Laura said.

Anna received treatment and spent time in a hospice but was sent home for her final days. Laura, by then living apart from Anna, went to visit shortly before her death.

‘She was in bed and she was hooked up to morphine for pain relief but she asked me to pass her a cigarette,’ Laura recalled. ‘We chatted, it became time for me to leave and I said “I will see you in a few days, I love you”.

‘And Anna said, “keep partying Laura Bear”. And that was the sort of thing she said all the time. She always called me “Laura Bear”. Everybody she was fond of she put “Bear” on the end of their names. So it wasn’t an extraordinary thing to say, it was an Anna thing to say. That was our last exchange.’

Days later Laura was walking home from work through a park when she had her first paranormal experience. 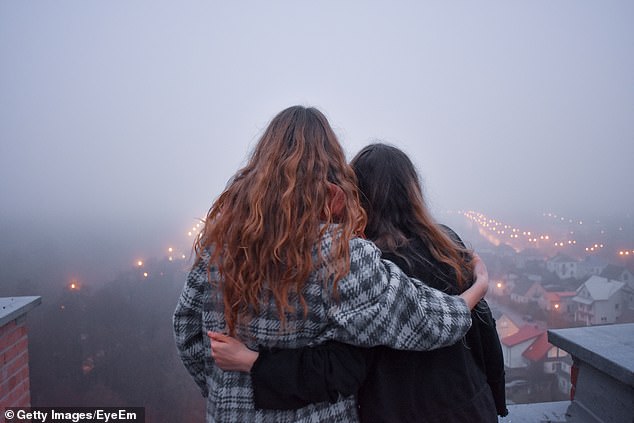 Laura met Anna, who had a ‘cloud of red hair’, when she was a teenager. Three years later, Anna died of cancer. Laura later heard her dying words repeated by a medium. Stock image

‘I finished work, I was walking home, the sun was getting quite low, shining through the trees,’ she continued. ‘It’s not a very big park and there’s a very steep hill. I looked up to my right and Anna was stood on that hill on a pathway near the trees… She was smoking.’

Laura knew logically that her friend was terminally ill in bed, and unable to go out. And yet she was certain it was the figure of Anna she could see on the hill.

Laura continued: ‘How she was holding the cigarette and she had a way of flicking her hair constantly. I could see the sunlight on her glasses. Anna didn’t look like anybody else. It was Anna.’

Deciding not to approach the figure, Laura continued to her flat. As she walked in, her phone was ringing.

‘I picked it up and it was Anna’s dad phoning to say Anna had passed away,’ she said. ‘Whatever I did see was a visual representation of Anna. Not someone who looked like her. Anna.’

I’m an atheist. I don’t believe there is life after death. If there was, why would your loved ones choose to speak to you in public through a stranger

Six years later Laura, by that time a parent in her mid-20s, joined some colleagues at an audience with a medium in a nearby town.

The event was held in a hall. The medium came on stage, decked out in costume jewellery, and began to tell members of the audience about the spirits she was ‘seeing’.

‘I was thinking it’s a load of rubbish,’ Laura said. ‘I’m an atheist. I don’t believe there is life after death. If there was, why would your loved ones choose to speak to you in public through a stranger.’

At the end of the night Laura’s friends joined a smaller group who had gathered around the medium while she went to scope out the nearest pub.

When she came back to hurry her friends along, the medium turned to her with a very specific message.

Laura recalled she said: ‘”I’m really glad you came back because there was a woman with red hair here for you but she told me not to reach out to you during the show because you would have rejected it. But she told me to tell you, “keep partying Laura Bear”.’

Speaking on the programme sceptic psychologist Chris French and Ashley Darkwood, a paranormal investigator and psychic medium, shared their conflicting views on what Laura had experienced.

Chris believed the first encounter could simply have been with a woman Laura had mistaken for Anna, or that she had dreamed about seeing Anna in a park and created a false memory.

Ashley spoke of how spiritualists like himself believe the soul can spend some time ‘visiting loved ones’ before ‘going to the next place’, adding: ‘I would argue at that point before she new, she probably wouldn’t have suffered sufficient shock to have hallucinated.’

Ashley added that there is also a belief in spiritualism that ‘departed souls’ can communicate from beyond the grave, which could, he believes, account for the medium’s highly specific message.

‘It could also be something called claircognisance, where you just know something. Or it could even be that the medium somehow went into a trance and it was Anna who spoke through the medium.’

However Chris pointed out that some so-called mediums are little more than con artists looking to deceive people dealing with grief. Others really do believe they are communicating with the dead, but often this is nothing more than a ruse.