The white woman whose brother and father have been charged in the fatal shooting of an unarmed black jogger in Georgia posted a graphic photo of Ahmaud Arbery’s body on Snapchat.

Lindsay McMichael, 30, took a photo of the 25-year-old’s blood-soaked body while police set up a crime scene in the Satilla Shores neighborhood in Brunswick on February 23.

McMichael said she posted the image because she is a ‘true crime fan.’

Lindsay McMichael, the sister of 34-year-old Travis McMichael and the daughter of 64-year-old Gregory McMichael, posted the graphic image showing the dead body of 25-year-old Ahmaud Arbery on Snapchat. Arbery was shot and killed on February 23 in Brunswick, Georgia 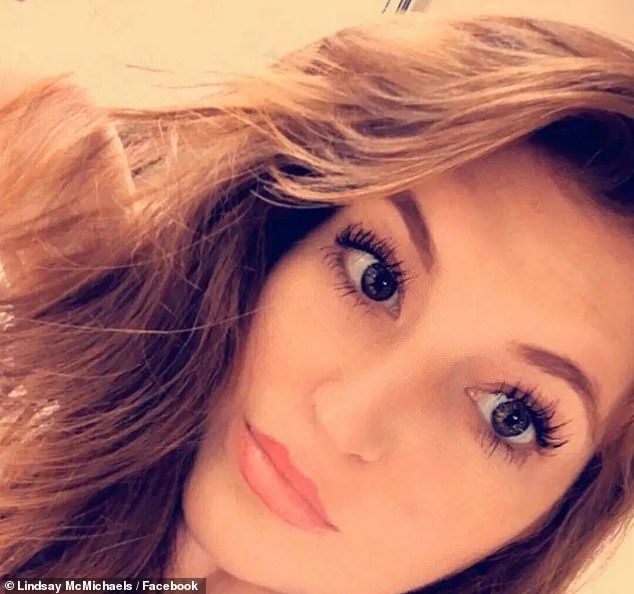 Lindsay McMichael (pictured), 30, said she ‘had no nefarious or malicious intent when I posted that picture’ 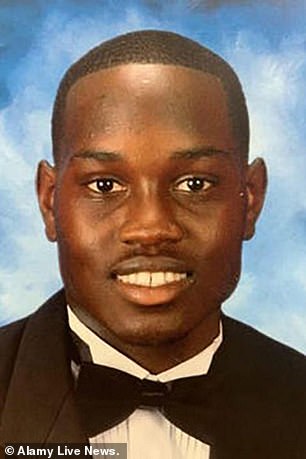 Arbery, 25, was killed while jogging in Brunswick, Georgia. Travis and Gregory McMichael trailed him in their pick-up truck, allegedly believing he was responsible for a spate of robberies in the neighborhood

‘I had no nefarious or malicious intent when I posted that picture,’ she told The Sun.

‘The thing is I’m a huge fan of true crime – I listen to four or five podcasts a week – I’m constantly watching that sort of thing.’

‘It was absolutely poor judgment.’

An attorney for Arbery’s family slammed McMichael for posting the image, saying it was ‘deeply disturbing.’

‘It actually fits the pattern of the McMichael family engaging in a weird, violent form of voyeurism.’

Lindsay McMichael, 30, was in her pajamas when her father Gregory, 64, and brother Travis, 34, shot and killed Arbery down the road from their Brunswick, Georgia home on February 23.

She told The Sun that she does not believe Arbery’s slaying was racially motivated, claiming that her father and brother have ‘loved’ all her non-white boyfriends. 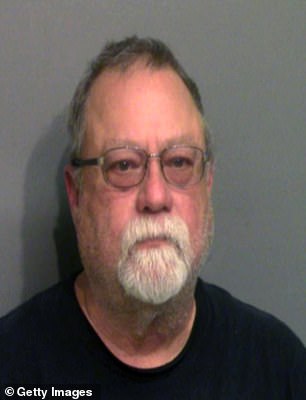 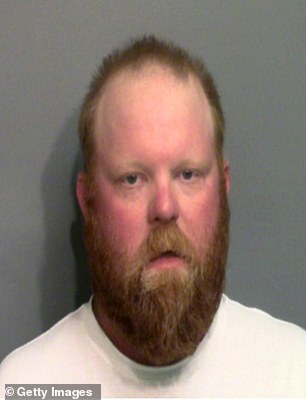 Gregory McMichael (left) and Travis McMichael are pictured. Lindsay McMichael insists the pair are not racist, and says the February 23 shooting of Arbery was not a ‘lynching’

‘I have never dated anyone of the same race since I was 19 years old and my father and my brother have loved every person that I’ve ever dated like they were their own son or brother.

‘These are people that I have brought home, that my sweet mama has cooked for and given everything to’.

Lindsay continued: ‘They’re not monsters. This wasn’t a lynching. Do I think mistakes were made? Absolutely, but look back on your life how many mistakes have you made?’

Gregory and Travis trailed Ahmaud Arbery in their white pick-up truck on February 23, before shooting him.

The pair allege they thought Arbery was responsible for robberies in their neighborhood.

Lindsay says she rushed outside when she heard gunshots down the street, and recalled the harrowing scene in her interview with The Sun.

‘I ran out to see what was going on…I had no idea. There was a firefighter I knew so I made a beeline to him and asked, ‘Are my father and brother okay?’ and he said yes.’

Linday says she saw Travis’ clothes splattered with Arbery’s blood, and saw terror in his face.

‘I’ve seen my brother in his happiest moments – I was there when his child was born and I’ve seen him in distress and I know that look… it wasn’t like some glory thing, like ‘I stalked and then got the kill that I was hoping for’. 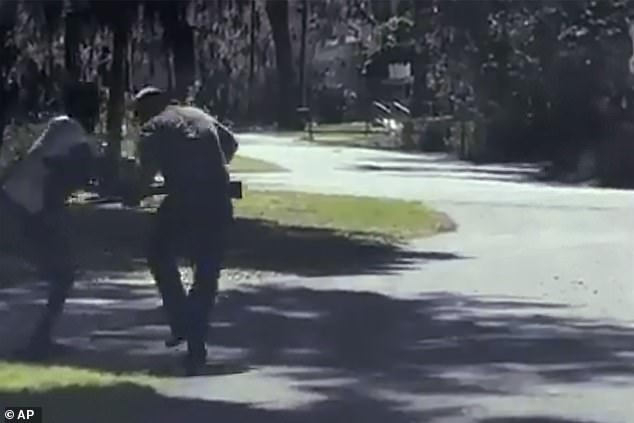 ‘It was absolute f***king panic… I really do believe that things just escalated so fast.’

‘I don’t think it was vigilante justice. Travis had a weapon stolen. My mom’s car had been rifled through. I think they just thought ‘Let’s apprehend this guy’.’

Video footage which showed Gregory and Travis embroiled in a scuffle with Arbery before they fatally shot him sparked national outrage after it was published on social media earlier this month.

Racial tensions in Georgia are running high in the aftermath of murder charges which were filed against Gregory and Travis last week.

Lindsay called for calm in her interview with The Sun, stating: ‘Here in the country of the United States, it is innocent until proven guilty’.

‘I get it that people are angry. But let it all [the complete evidence] come out, please, for the love of God and then we’ll figure things out after that.

‘If things were done that were nefarious or wrong, fine, but let it come out first.’

Linday says that both she and her 61-year-old mom have been subject to violent threats.

Anonymous people have allegedly threatened to ‘murder and rape’ the pair.

‘We’re not not the ones on trial here – my dad and my brother are,’ she stated. 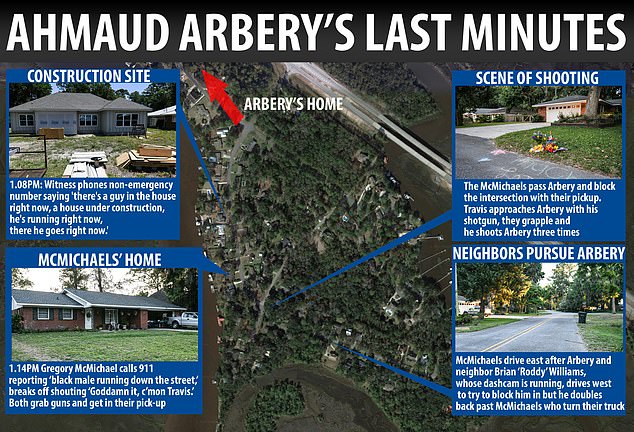 A map showing the February 23 encounter between Arbery and the McMichaels. Lindsay McMichael ran down the street to the scene of the fatal shooting just after it occurred

The lawyer for Arbery’s family said the 25-year-old was chased for four minutes before being gunned down by a white father and son in February.

According to Merritt, the initial video that was leaked by Brunswick attorney Alan Tucker and revealed Arbery’s last moments on February 23 is much longer. 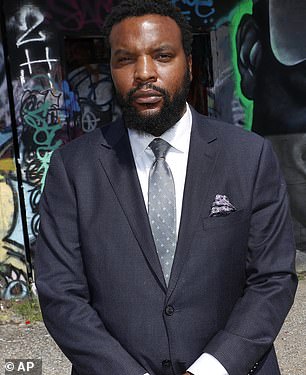 According to attorney, S. Lee Merritt (above), the initial video that was leaked by Brunswick attorney Alan Tucker and revealed Ahmaud Arbery’s (right) last moments on February 23,shows the McMichaels chasing Arbery for four minutes 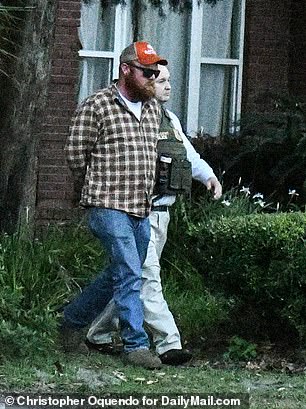 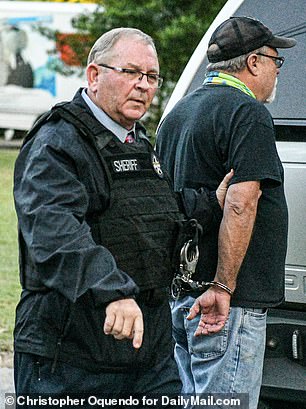 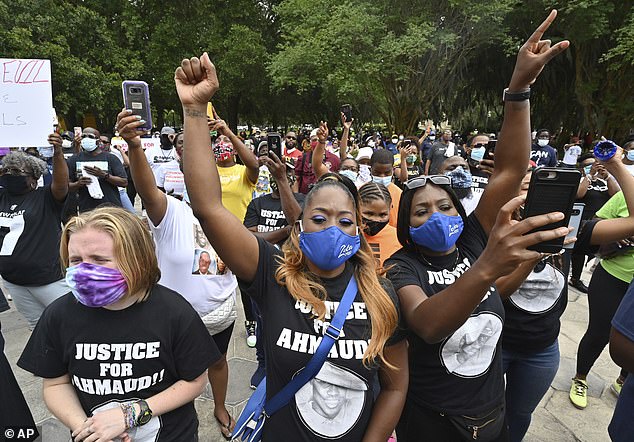 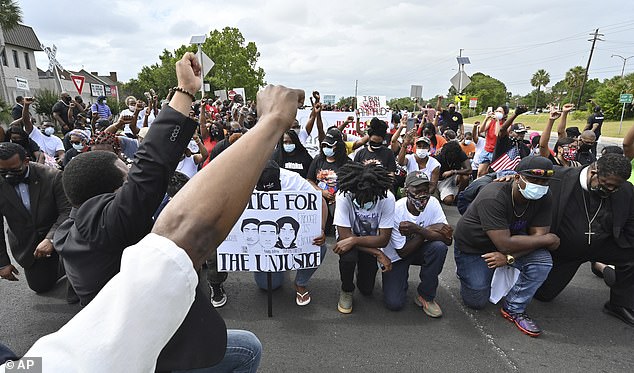