Underwired bras are becoming less popular as women have started to opt for softer bralet styles of underwear in the wake of #MeToo.

Sales of traditional cleavage-boasting bras fell by 45 per cent last year and several of the country’s top retailers have seen a rise in sales for more relaxed styles.

A third of bras on Net-a-Porter are now soft cup bralets and less than a tenth of bras sold by Selfridges are now push-ups, reports the Times.

In the wake of #MeToo many women have started to wear a bra that enhances their natural shape rather than the nineties ‘push up’ look -which was made iconic by Wonderbra’s 1994 ad.

Wonderbra’s advertisement starred supermodel Eva Herzigova and received criticism at the time for how it portrayed women. Marks and Spencer reported that sales of bras, like the Lace Non-Padded Bralet from the Rosie Huntington-Whiteley collection (pictured) were up 40 per cent in the last year

Czech-born Eva, 47, said 20 years later: ‘My Wonderbra campaign empowered women. It didn’t degrade them like some said or say.’

Marie-Louise Mogensen, co-founder of brand Baserange, said: ‘Women have been dictated too about their breasts. There’s no right shape.’

None of Baserange’s products are underwired and the models on their website are not airbrushed in pictures.

Women on social media have also joined the movement away from underwire.

Marks and Spencer has reported that sales of non-wired bras were up 40 per cent in the last year and their current bestseller is a lacey crop-top style bralet. 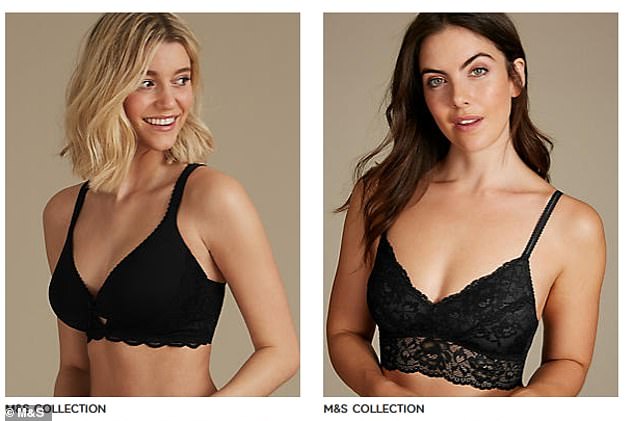 Several retailers, including Marks and Spencer who have dozens of non-wired styles, have said women are opting for more comfortable underwear

One person wrote: ‘Looks very good quality and feels lovely too. Dislike hard “underwired” bras which dig into your chest’

And another said: ‘When I looked at the bralet I didn’t believe it could do the job of an underwired bra. I was surprised that for many hours it did.’

According to retail analytics firm Edited there are 70 per cent more bralets in the shops this quarter than last. 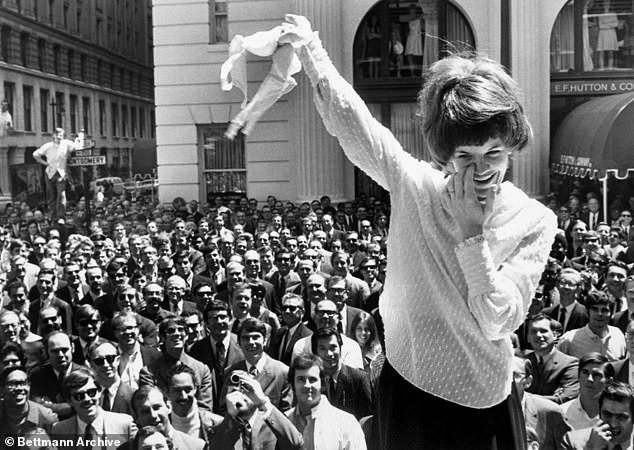 It is believed that this increase in popularity could have come from online influencers and celebrities also changing their underwear and encouraging others to step away from underwire.

This change comes 50 years after the Miss America protests in Atlantic City where bras were labelled as ‘symbols of feminine oppression’ and thrown into trash cans.

It was widely rumored that the trash can was lit on fire — sparking the myth of bra-burning feminists — but the protest continued flame free.

Even luxury lingerie brand Rigby and Peller, renowned for their designs, reported that ‘bralet’ and ‘triangle’ are some of the most searched for terms on their website.