Audrey and Brian Watson: Couple from Staffordshire sent a question to Steve Webb a year ago, sparking our investigation into a £3bn scandal – read their story here

Elderly women battling the Government for full payouts of lost state pension have been dealt a bitter blow by the Parliamentary Ombudsman.

A number have received phone calls today from the complaints body, which told them it will not intervene in the Government’s decision to only hand them a one-year backpayment.

That means they and many others, who have been on the incorrect state pension for more than a decade, will remain potentially tens of thousands of pounds out of pocket.

They have missed out because their husbands reached state pension age before a key rule change on 17 March 2008.

An estimated 200,000 women have been underpaid state pension in a £3billion scandal uncovered by former Pensions Minister Steve Webb and This is Money a year ago.

But only some women are being fully repaid, while others only get one-year arrears and increased state pension going forward – all depending on when they and their husband were born.

The women rebuffed by the Ombudsman today include Audrey Watson, aged 82, whose husband Brian wrote to Steve Webb in early 2020, sparking the investigation which has benefited many other women.

>>>Were you underpaid state pension? Find out what to do here

Mr Watson, 79, said he and his wife, who had complained about maladministration by the DWP, were very disappointed by the Ombudsman.

‘It seems they will not be able to do anything more to help. They say it would take a change in the law to help our case,’ he said.

‘They say that as the DWP have correctly applied the law they are not able to intervene.’

The Government was meant to write to the couples affected before March 2008 and ask them to apply for an increase.

But all the women This is Money have spoken to who missed out are adamant neither they nor their husbands received such a letter, and insist they would have acted on it if they had done so.

One point of contention is that when increases to women’s state pension were due, the DWP says it sent key documents to their husbands.

Mrs Watson said in her complaint about maladministration: ‘The DWP could, and in my view, should, have written to me direct to claim.’

Webb, who has campaigned for women getting one-year backpayments to receive full arrears, said: ‘The women who have complained to the Ombudsman will be devastated by this response. 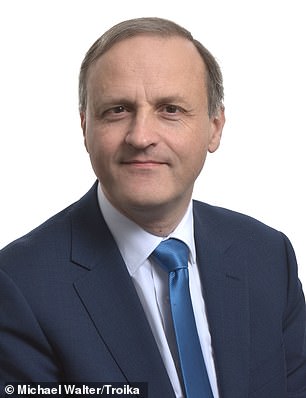 Steve Webb: This is Money columnist has campaigned for women getting one-year backpayments to receive full arrears

‘Through no fault of their own they did not claim a pension uplift when their husband turned 65 and have lost thousands of pounds as a result.

‘They understand that the law has been applied correctly but are challenging the failure of the DWP to run an effective system to make sure they knew about this need for a second claim.’

Webb, who is now a partner at pension consultant LCP, added: ‘I will be making the strongest possible representations to the Ombudsman to think again about this decision.’

A spokesperson for the Parliamentary and Health Service Ombudsman said: ‘Rules about claiming benefits and how long benefits can be backdated are set out in law.

‘Our recommendations cannot undermine or break the law.

‘We are not able to investigate these complaints because we cannot achieve what the women have asked for – to recommend women’s state pension top-ups are backdated for longer than the law allows.’

A DWP spokesperson said: ‘Married women whose husbands became entitled to a state pension after them, but before 17 March 2008, are required by law to make a claim for an uplift in Category BL state pension.

‘The law limits the backdating for this group to a period of 12 months – this is a long-standing element of social security law.’

Its statement on the £3billion underpayment of state pension to elderly women is below.

Why are some women who lost state pension not getting full arrears?

Since 17 March 2008, the increases are supposed to be automatic, so women with husbands retiring since then get a full backpayment.

But before that women had to make a claim to get the full sum they were due, so they get a much smaller payout.

The Department for Work and Pension has launched a huge trawl of its records and recently began proactively contacting widows, over-80s, and women whose husbands reached state pension age after March 2008 who are receiving incorrect sums.

But women whose husbands reached state pension age before then still have to contact the DWP to claim the correct state pension. Many are likely to remain in the dark that they could be on a higher state pension.

There are some loopholes where women with ‘pre-March 2008 cases’ might receive a bigger payout – read more here.

A DWP spokesperson says: ‘The action we are taking now will correct the historical underpayments that have been made by successive governments and anyone impacted will be contacted by us to ensure they receive all that they are owed.’

Those whose husbands became entitled to their state pension on or after this date will be identified in the process, and this will include those who are receiving graduated retirement benefit only.

It is understood that in processing cases, the DWP is prioritising errors that are the longest standing and recipients who are older to reduce the time these women have to wait.

Meanwhile, those who contact the DWP themselves to query their state pensions will continue to have them reviewed.

The DWP has confirmed that deceased women who were underpaid will have arrears paid to their estate, so it will go to their beneficiaries.